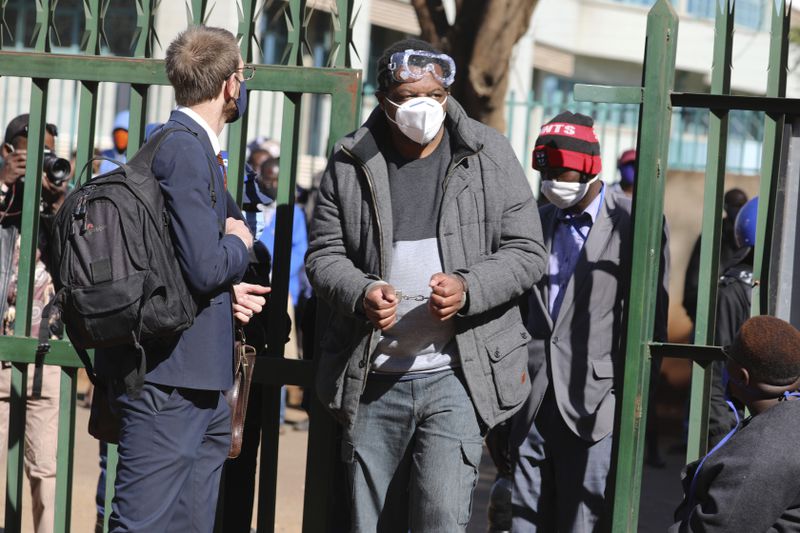 HARARE, Zimbabwe (AP) — A Zimbabwean investigative journalist will remain in jail after a judge dismissed his bail application Thursday, as the United Nations secretary-general raised “concern” about a wave of arrests in the country.

Journalist Hopewell Chon’ono has been in detention for more than two weeks.

Before his arrest, Chin’ono regularly posted on Twitter about alleged government corruption and encouraged Zimbabweans to speak out and act against graft. He is charged with inciting public violence for supporting anti-government demonstrations that were planned for July 31.

Opposition politician Jacob Ngarivhume was also arrested for organizing the anti-government protest, which was thwarted by police and the military which kept people off the streets of Harare, the capital, and other cities on July 31.

Hundreds have been arrested in recent months, including journalists, lawyers, opposition politicians, doctors and nurses, for protesting against the government or striking for better pay as tensions rise in the troubled southern African country.

Another investigative journalist, Mduduzi Mathuthu, is in hiding. He told The Associated Press his lawyers would approach the courts for protection before handing himself to the police. He said he feared being tortured, as has allegedly happened to several other government critics.

“I need the court’s protection before I return home,” he said. “The president has labeled us terrorists and has spoken of flushing us out, and that has dark connotations because it gives me a picture of an animal being startled and chased into the open to be killed.”

He was referring to President Emmerson Mnangagwa’s statement this week in which he vowed to continue with the clampdown.

Mnangagwa described critics as “dark forces,” and “a few bad apples” that should be “overcome,” in an address on state television Tuesday.

Human rights lawyers said more than 60 people have been arrested in the past week, while others were allegedly abducted and tortured as security agents sought to crush the protest. The arrests are continuing even though the protest did not take place, said Zimbabwe Lawyers for Human Rights.

On Thursday, a government spokesman, Nick Mangwana, dismissed the allegations, saying “there is no crisis or implosion” in Zimbabwe.

“He urges the government of Zimbabwe to ensure the protection of all fundamental human rights, notably the freedom of opinion and expression and the right to freedom of peaceful assembly and association,” said a statement from Guterres’ office.

Zimbabwe’s neighbour, South Africa, on Thursday said it “noted with concern” reports of abuses in Zimbabwe and said that South Africa’s Minister of International Relations Naledi Pandor discussed the issue with Zimbabwe’s Foreign Affairs Sibusiso Moyo on Tuesday via telephone.

The United States on Wednesday imposed sanctions on Kuda Tagwirei, a business associate of Mnangagwa, in signs of the international community’s growing frustration with Mnangagwa’s administration.