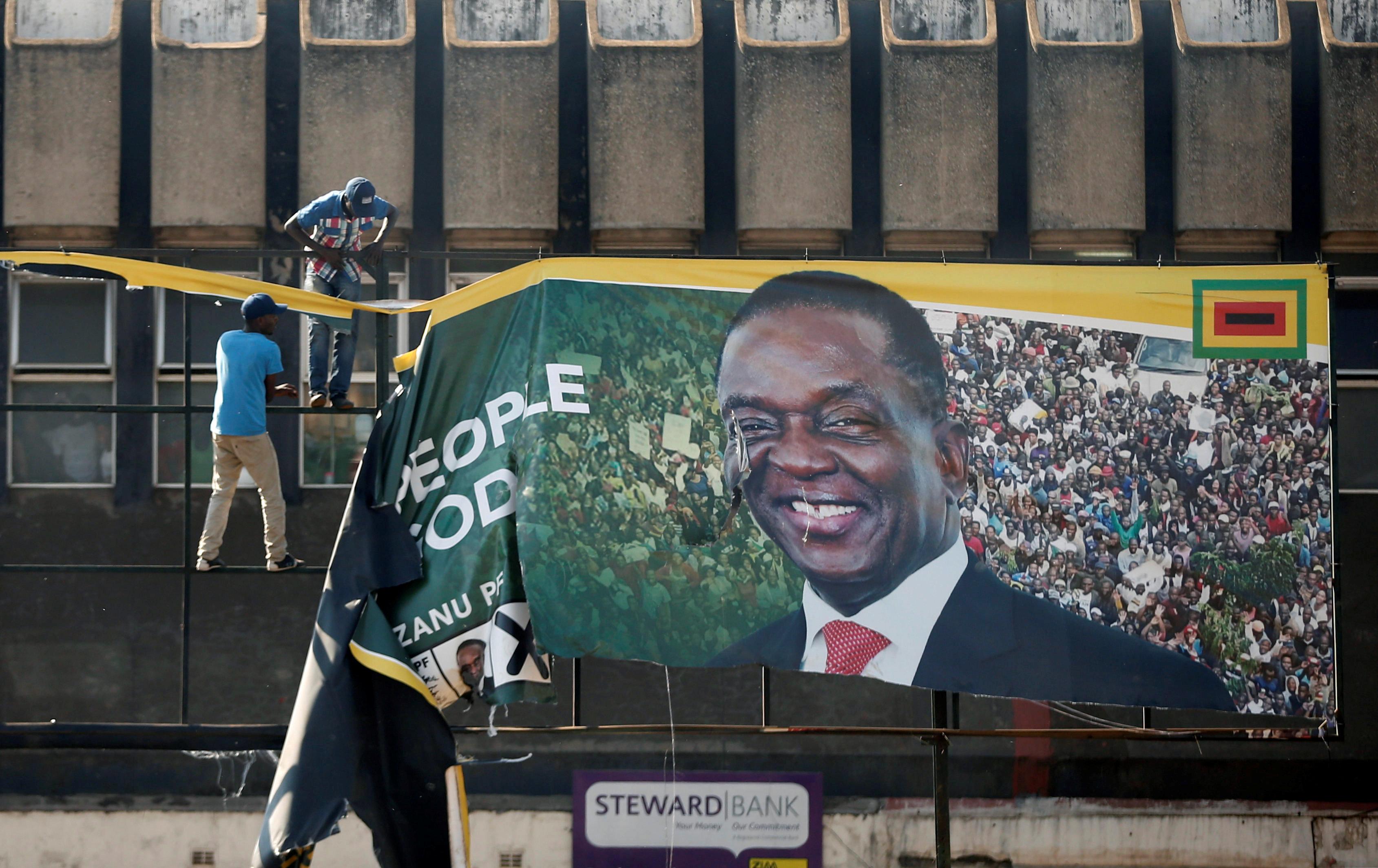 HARARE (Reuters) – Automatic gunfire crackled in the streets of Zimbabwe’s capital on Wednesday as soldiers stepped in to disperse protesters who clashed with police after the main opposition leader accused the ruling party of trying to rig the country’s election.

At least one person was shot dead by the soldiers near a bus rank, witnesses at the scene told a Reuters photographer.

European Union observers questioned the conduct of the presidential and parliamentary poll, Zimbabwe’s first since Robert Mugabe was forced to resign following a de facto coup in November after nearly 40 years in power.

The observers expressed concern about delays in releasing the results of the presidential contest.

The leader of the opposition Movement for Democratic Change, Nelson Chamisa, said on Twitter he had won the “popular vote” in Monday’s election, in which he challenged Mugabe’s successor, Emmerson Mnangagwa from the ruling ZANU-PF party.

Mnangagwa also took to Twitter, calling for calm and urging patience before the results were announced.

Opposition supporters burnt tyres in the centre of Harare, blocking some streets and engaging in running battles with police who fired water cannon to disperse the protesters.

Soldiers then arrived at the scene, jumping out of several armoured personnel carriers. Gunfire was heard and an army helicopter flew in the skies above Harare, witnesses said.

The electoral commission had said it would start announcing results for the presidential race from 10.30 GMT but election officials said they would announce the results from Thursday.

“I was making a peaceful protest. I was beaten by soldiers,” Norest Kemvo, who had gashes to his face and right hand.

“This is our government. This is exactly why we wanted change. They are stealing our election.”

Another protester, Colbert Mugwenhi said: “We had no weapons. Why are the army here beating us? shooting us? This is not an election it is a disgrace on our country.”

“We are tired of them stealing our votes. This time we will not allow it, we will fight,” said one protester who wore a red MDC beret in central Harare.

With three seats yet to be declared, ZANU-PF had 144 seats compared to 61 for the MDC, meaning the ruling party achieved a two-thirds majority which would allow it to change the constitution at will.

Chamisa accused ZANU-PF of trying to steal the election. He accused the commission of releasing the parliamentary results first to prepare Zimbabweans for a Mnangagwa victory.

“The strategy is meant to prepare Zimbabwe mentally to accept fake presidential results. We’ve more votes than ED (Emmerson Dambudzo). We won the popular vote (and) will defend it,” Chamisa said on Twitter.

The EU’s Chief Observer, Elmar Brok, said he did not yet know if the shortcomings would have a material effect on its outcome, and he criticised the Zimbabwe Electoral Commission (ZEC) for being at times “one-sided”.

The EU’s assessment is critical in determining whether Zimbabwe can shed its pariah status as it could help attract investors and trigger an economic revival.

The EU did not understand why the release of the presidential result was taking so long, he said.

“The longer it lasts that the results of the presidential election is not known, the more lack of credibility it provides,” Brok said.

Zimbabwe was once one of Africa’s most promising economies but under Mugabe’s rule became tainted by corruption, mismanagement and diplomatic isolation. Its population of 13 million is struggling amid shortages of foreign currency, unemployment above 80 percent and lack of foreign investment.

Voters traditionally pick a presidential candidate based on their party affiliation and the trend in the parliamentary election was expected to continue when results for the president are announced this week.

Chamisa’s MDC won in most urban centres, where it enjoys majority support. One independent candidate and a member from a party linked to Mugabe also won one seat each.