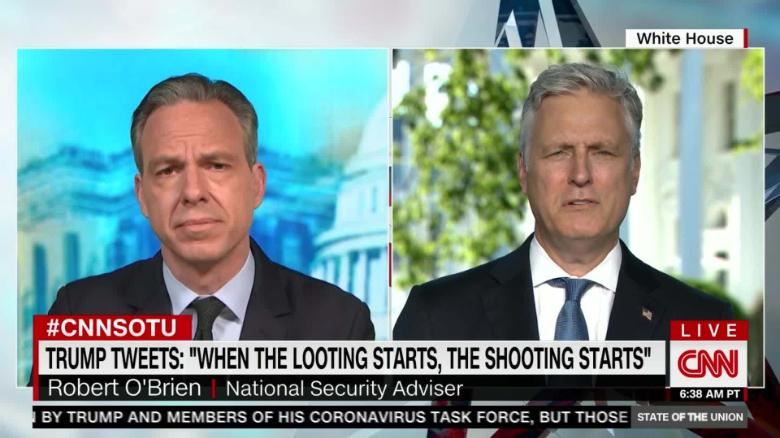 Washington (CNN)Zimbabwe summoned the US ambassador in Harare Monday after US National Security Adviser Robert O’Brien referred to the nation as a foreign adversary and suggested it was taking advantage of protests over the killing of George Floyd to foment unrest.

In response, Ambassador Brian Nichols released a striking and personal statement drawing on Floyd’s death to call on the Zimbabwean government to end its violence against activists and to hold those who perpetuated such crimes accountable.
Nichols met with Zimbabwean Foreign Minister S.B. Moyo “amid a painful, sad and infuriating week,” he said in the statement Monday. The meeting came a day after O’Brien included Zimbabwe in a catalog of “foreign adversaries” who he said, without presenting evidence, were “going to take advantage of this crisis to sow discord and to try and damage our democracy.” A State Department spokesperson confirmed that Nichols and Moyo met to discuss O’Brien’s remarks.
Nichols said in his statement that “George Floyd’s brutal killing, hundreds of thousands of the world’s most vulnerable people succumbing to a global pandemic, the crushing economic cost of lockdowns borne by the poorest among us, remind us that we cannot wait for justice or to recognize each other’s humanity.”
The US diplomat, who has served in the foreign service for more than 30 years, said he “urged Zimbabwe’s government to end state-sponsored violence against peaceful protesters, civil society, labor leaders and members of the opposition in Zimbabwe and to hold accountable those responsible for human rights abuses.”
“As an African American, for as long as I can remember I have known that my rights and my body were not fully my own,” Nichols writes. “I have also always known that America, conceived in liberty, has always aspired to be better — a shining city on a hill — and that is why I have dedicated my life to her service,” Nichols wrote.
“In a long, unbroken line of black men and women, George Floyd gave the last full measure of devotion to point us to a new birth in freedom,” he wrote. “Every American official from our President to Minneapolis’ African American Police Chief Medaria Arradondo has vowed to deliver justice.”
“Zimbabweans surely wonder when, after so many years, Patrick Nabanyama, Itai Dzamara, and Paul Chizuze will get justice,” he said, referencing three activists who were disappeared in Zimbabwe. Nabanyama, an opposition party worker, was reportedly abducted in 2000 and declared dead in 2010. Dzamara, a journalist and pro-democracy activist, disappeared in 2015, according to Amnesty International. Chizuze, a human rights activist, went missing in 2012.
The US Ambassador noted in his statement that both the US and Zimbabwean constitutions “enshrine the right to free speech and peaceful protest,” but noted that three Zimbabwean protesters had been “arrested, abducted, assaulted and left for dead.”
“Americans will continue to speak out for justice whether at home or abroad,” Nichols said. 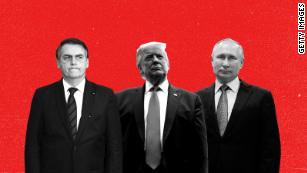 In a statement, Moyo said he told Nichols that “O’Brien’s allegations are false, without any factual foundation whatsoever and that they are deeply damaging to a relationship already complicated by years of prescriptive megaphone diplomacy and punitive economic sanctions.”
“Zimbabwe is not and has never been an adversary of the United States of America,” he said, adding that the nation joined with the “many others — including the African Union and the United Nations — who have expressed their deep concern” at Floyd’s killing.
The foreign minister also suggested a double standard to the US domestic response to the protests — which has included a large-scale deployment of national guard members — and its condemnation of Zimbabwe’s response to civil unrest.
“We take due note of the measures deployed by the US authorities to deal with the challenges currently confronting them. At the same time, we recall the harsh US criticism and condemnation of our own response to multiple instances of illegal, violent civil unrest … and we reflect on the lack of balance and even the double standards so evident in US policy towards Zimbabwe,” he said.
According to Human Rights Watch, the southern African nation “remained highly intolerant of basic rights, peaceful dissent, and free expression in 2019.”