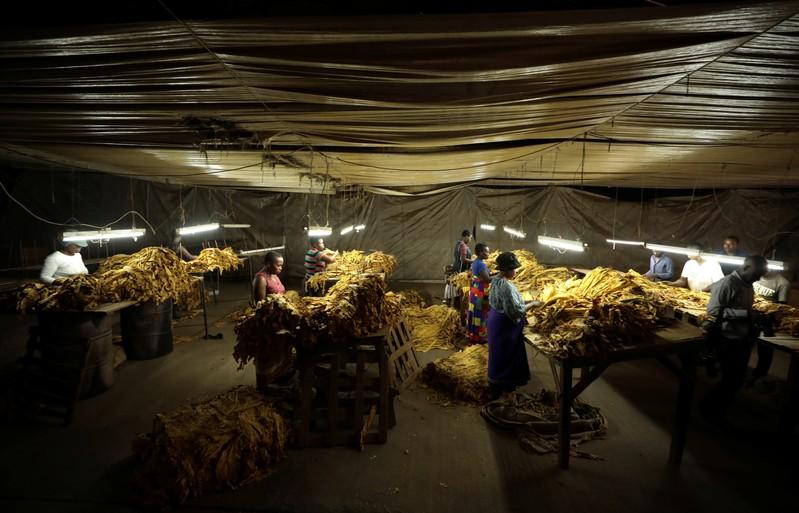 HARARE (Reuters) – Zimbabwean farmers are expected to sell up to 240 million kg of tobacco this year, a 5 percent dip from 2018 due to drought, an industry official said on Wednesday at the start of the selling season that could help ease a severe dollar shortage.

The opening of tobacco auctions traditionally leads to improved foreign exchange inflows in the southern African nation as buyers bring in dollars from offshore banks to purchase the crop.

Tobacco, which is grown by more than 170,000 mostly small-scale farmers, is Zimbabwe’s second-biggest earner of foreign exchange after mining and last year brought in $892 million.

Farmers are expected to produce between 220 and 240 million kg of the crop this year following a drought that hit yields in some areas. The lack of rain has also wilted other crops, including the staple maize.

“Some of the crop was affected by drought but we are still conducting an assessment to see the actual extent of the damage,” said a Tobacco Industry and Marketing Board (TIMB) official who declined to be named.

Zimbabwe is gripped by shortages of U.S. dollars, leading to shortages of fuel, food and medicines, especially in state hospitals, where doctors have said patients are dying due to a lack of basic supplies.

Last month Harare ditched a discredited 1:1 official U.S dollar with its quasi-currency bond note and electronic dollars and merged them into a transitional currency called the RTGS dollar.

On the interbank market, where tobacco farmers are required to immediately sell half of their dollar earnings, one U.S. dollar bought 2.86 RTGS dollars. On the black market the rate was 3.9 per dollar.

Growing demand from China, the world’s biggest smoking nation, and funding from private tobacco companies have helped boost output, which had plunged in 2008.