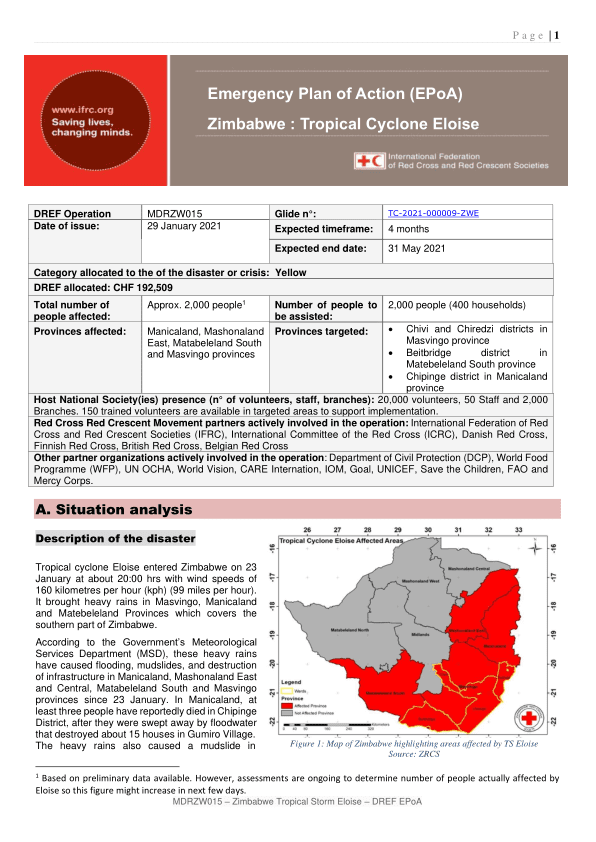 Description of the disaster

Tropical cyclone Eloise entered Zimbabwe on 23 January at about 20:00 hrs with wind speeds of 160 kilometres per hour (kph) (99 miles per hour). It brought heavy rains in Masvingo, Manicaland and Matebeleland Provinces which covers the southern part of Zimbabwe.

According to the Government’s Meteorological Services Department (MSD), these heavy rains have caused flooding, mudslides, and destruction of infrastructure in Manicaland, Mashonaland East and Central, Matabeleland South and Masvingo provinces since 23 January. In Manicaland, at least three people have reportedly died in Chipinge District, after they were swept away by floodwater that destroyed about 15 houses in Gumiro Village.
The heavy rains also caused a mudslide in Chipinge and Tanganda, with large boulders blocking some roads, and damages to at least three schools across the province. The Watershed, Bangazzan and Mutakura dams are at their alert levels and could spill and cause flooding downstream.

In Masvingo Province, damages to roads are hampering access to nearly 170 people waiting to be evacuated in Ward 34 of Village 21, Masvingo District. Some are already living in the open, in urgent need of shelter assistance. Tokwe Mukosi Dam has reached its full capacity and begun to spill, which could lead to floods in the province, according to Zimbabwe National Water Authority. In Zimbabwe’s capital, Harare, 34 families have been evacuated to two high schools in Budiriro and need food, hygiene kits, blankets, and other non-food items.

Masvingo Province: According to the Zimbabwe Red Cross Society (ZRCS) Provincial Development Coordinator Chivi District identified four evacuation centres which can house approximately 250 families (1,050 people). However, the plan has faced a major setback as community members are not cooperating — they are opting to stay in open spaces close to their homes where they can walk back to assess the situation on their own. In Masvingo district, 47 families have moved to an open space about 4 km from their village and they have started constructing temporary shelter using the 50 tents donated by ZRCS. The place has no safe water and no proper ablution facilities posing a danger to the affected people.

Mashonaland East Province: Continuous heavy downpours (greater than 40mm) resulted in infrastructure damage in Chikomba District. Most families had their food stocks soaked in water and this includes buckets of sorghum which they had received from Caritas in Chikomba. Two females from Bwanya village were injured when their three-roomed houses collapsed. At the time of planning this operation, about 274 people had been reported affected by Tropical Cyclone Eloise in this province.

Matabeleland South Province: Heavy rains pounded Beitbridge town (greater than 30mm) resulting in flash flooding. A total of six houses were destroyed in Wards 5 and 15 of Beitbridge District. Most roads across the Districts are in a poor state due to the heavy rains and flash flooding. Due to poor network connectivity and road network across the province, most areas are still inaccessible thus failing to get up to date information on the damage of infrastructure. Currently, the ZRCS team is going for assessments to evaluate the damage caused in these remote affected areas. Approximately 300 people have been affected by the tropical storm.

Manicaland Province: To date, a total number of 265 persons (53 households) in Manicaland have been evacuated to four evacuation centres. In Chipinge and other surrounding wards near Save downstream, people are being encouraged to go to designated evacuation centres within their wards because of fear of backflow of Save river. Additionally, COVID19 remains a threat with four people having been tested positive in one of the evacuations centres in Manicaland. Preliminary assessments conducted in affected areas indicate that approximately 1,889 people or 378 households have been affected by tropical storm Eloise, however, ZRCS teams have been dispatched to conduct detailed assessments so this number might increase as more details on impact emerge.