The chasm continues to play out on social media and in government circles. 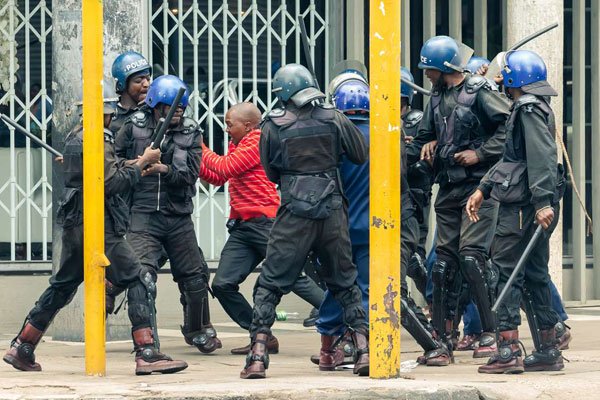 Zimbabwe police corner a man as they disperse a crowd gathered to hear an address by leader of the Movement for Democratic Change Alliance, Nelson Chamisa, in Harare last year. PHOTO | AFP

The raging anti-racism protests in the United States have widened the rift between Zimbabwe and Washington, threatening reengagement talks between the two countries.

US national security adviser Robert O’Brien stirred the hornet’s nest this week when he referred to the southern African country as one of the foreign adversaries alongside China and Russia that were allegedly taking advantage of protests over the killing of George Floyd to fuel unrest in America.

Infuriated by Mr O’Brien’s statements, Zimbabwe summoned the US ambassador Brian Nichols to lodge a formal complaint, but the meeting between the envoy and Foreign Affairs minister Sibusiso Moyo failed to heal the rift.

Mr Moyo and Ambassador Nichols issued conflicting statements about their engagement with the envoy saying, “Americans will continue to speak out for justice whether at home or abroad.”

He reminded his hosts of unresolved cases of police brutality and the recent abductions of three female opposition activists, which he said needed closure.

Mr Moyo said Harare was reflecting “on the lack of balance and even the double standards so evident in US policy towards Zimbabwe.”

The chasm continues to play out on social media and in government circles.

Zimbabwe Defence deputy minister Victor Matemadanda even went to the extent of organising a protest in solidarity with the late Floyd.

Police, however, blocked the protest that was set to take place outside the US embassy in Harare saying “while the demonstration is for a noble cause” it contravened lockdown regulations to stop the spread of coronavirus.

“US President Trump must no longer blow his trumpet. We are not going to war but (we are demonstrating) that we are not happy over the killing of George Floyd,” Mr Matemadanda said and added that the US cannot lecturer Zimbabwe on democracy because of its troubled race relations.

“They talk about themselves having the best justice system in the world. Yes, America has always had a justice system, but one that is racial,” said Mr Matemadanda, who is also political commissar for the ruling Zanu-PF party.

“They are worried and concerned about the white Americans and do not care about the lives of black Americans.”

Mr O’Brien’s statements were a throwback to the 2005 declaration by US Secretary of State Condoleezza Rice that Zimbabwe was among the “outposts of tyranny” in the world.

Ms Rice said the US had a duty to help foster freedom in Zimbabwe, Burma, Cuba, Belarus, Iran and North Korea. It was at the height of a diplomatic rift between the US and Zimbabwe on Harare’s alleged poor human rights record.

Philani Moyo, a Zimbabwe-born academic from the University of Fort Hare in South Africa, said the latest diplomatic tiff showed that Washington was not softening its stance on Zimbabwe.

“The reference to Zimbabwe as a foreign adversary not only signifies the Trump administrations’ policy position but continues decades of strained diplomatic relations,” Prof Moyo said.

“When read together with Mr Nichols’ statement after his meeting with Mr Moyo, it becomes clear that the Trump administration does not view the current Zimbabwe government as different from the Mugabe regime hence its characterisation as an opponent in geopolitical and geostrategic interests.”

The US diplomat said in the meeting with Mr Moyo he had “urged the government to end state-sponsored violence against peaceful protestors, civil society, labour leaders and members of the opposition and to hold accountable those responsible for human rights abuses.”

Christopher Mutsvangwa, a former presidential adviser, said the envoy was wrong to draw parallels between the situation in America and Zimbabwe’s human rights record.

“As he lists unresolved cases, ambassador Nichols needs to be even-handed. The existence of such victims serves to highlight the magnitude of the political challenges burdening President Mnangagwa and the new dispensation. It also calls for dispassionate treatment from all nations that mean well and especially from the democratic superpower that is USA,” Mr Mutsvangwa said.

Western missions accused the Zimbabwe government of human rights violations, including the abduction and torture of its opponents. The government denies any involvement in abductions and blames a “third force.”

The US first imposed sanctions on Zimbabwe in 2001 when it enacted the Zimbabwe Democracy and Economic Recovery Act (Zidera).

Zidera bars Americans sitting on boards of international financial institutions such as the International Monetary Fund and the World Bank from supporting financing arrangements for the southern Africa country.

A year after the law was passed; the US introduced an executive order of measures that imposed a travel ban and an assets freeze against then president Robert Mugabe and his close associates.

Washington also imposed sanctions on some of Zimbabwe’s state-owned companies and imposed an arms embargo on the country as punishment for alleged human rights violations and electoral fraud.

Zimbabwe terms the sanctions punishment for its land reform programme that began in 2000, and saw the seizure of nearly 5,000 commercial farms owned by white Zimbabweans that were redistributed to landless blacks.

The US insists Zimbabwe has not implemented economic reforms necessary for the 2001 sanctions to be reviewed.

Since coming to power, President Mnangagwa has lobbied the AU and SADC to support Zimbabwe’s push for the removal of the sanctions, without success.

In March, the US added Zimbabwe’s ambassador to Tanzania Anselem Sanyatwe and State Security minister Owen Ncube to the sanctions list for their alleged role in the killings and abduction of opposition activists.

The US insists that its sanctions are targeted and only affect the ruling elite while President Mnangagwa blames the embargo for the country’s economic collapse.