Zimbabwe: was Mugabe’s fall a result of China flexing its muscle? 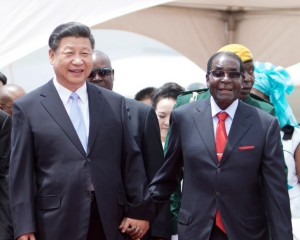 Source: Zimbabwe: was Mugabe’s fall a result of China flexing its muscle? | World news | The Guardian

Zimbabwean President Robert Mugabe (R) greets Chinese President Xi Jinping on his state visit in Harare. Among the decisions Mugabe’s successor will face is whether to continue the strong economic relationship between the two countries. (JEKESAI NJIKIZANA/AFP/Getty Images)

A visit to Beijing last Friday by Zimbabwe’s military chief, General Constantino Chiwenga, has fuelled suspicions that China may have given the green light to this week’s army takeover in Harare.

If so, the world may just have witnessed the first example of a covert coup d’etat of the kind once favoured by the CIA and Britain’s MI6, but conceived and executed with the tacit support of the 21st century’s new global superpower.

China, Africa’s biggest foreign investor, has more at stake in Zimbabwe, and more political influence, than any other state. This is largely due to its extensive investments in the mining, agriculture, energy and construction sectors. China was Zimbabwe’s top trade partner in 2015, buying 28% of its exports. But the Chinese connection is about more than money.

The pre-independence guerrilla force led to victory by Robert Mugabe, the 93-year-old Zimbabwean president detained by the military on Tuesday night, was financed and armed by the Chinese in the 1970s. Close ties have continued to the present day.

When the US and EU imposed sanctions after Zimbabwe’s 2002 elections, China stepped in, investing in over 100 projects. Beijing also blocked UN security council moves to impose an arms embargo and restrictions on regime figures.

Xi Jinping, China’s president, visited Zimbabwe in December 2015 and has since promised a massive $5bn (£3.8bn) in additional direct aid and investment. He described China as Zimbabwe’s “all-weather friend”.

Xi’s personal support extended to providing $46m towards building a new parliament in Harare. The Mugabe family is reported to have savings and property assets squirrelled away in Hong Kong, a favourite shopping destination for Mugabe’s wife, Grace.

Aware of criticism from Mugabe’s opponents that Beijing is propping up a despotic regime, China has used soft power tools to win over public opinion. This included a $100m medical loan facility in 2011 and the construction of a new hospital in rural Zimbabwe. In 2015, state-owned Power Construction Corporation of China signed a $1.2bn deal to expand Zimbabwe’s largest thermal power plant. Chinese investors have also bought into farms seized from their former white owners and given to Mugabe cronies who subsequently neglected them.

China’s big bet on Zimbabwe is not all staked on Mugabe and his faction in the ruling Zanu-PF party. Military-to-military cooperation has continued since independence in 1980. China financed and built Zimbabwe’s National Defence College and the People’s Liberation Army has helped train the Zimbabwean army.

Gen Chiwenga, the armed forces chief, has had regular contacts with Chinese counterparts, most recently with a military delegation that visited in December. China’s defence minister, Chang Wanquan, who met with Chiwenga in Beijing last Friday, visited Harare in 2015. Reports suggest Chiwenga’s backing was instrumental in this week’s military intervention.

The takeover came shortly after Mugabe backers accused him of acting treasonably in warning of negative consequences arising from Mugabe’s decision to sack the vice-president, Emmerson Mnangagwa. China’s foreign ministry said Chiwenga’s meeting with Chang was a “normal military exchange”. But Beijing has not explicitly denied foreknowledge of the Harare coup. More significantly, perhaps, it has not condemned, or made any other comment, on Mugabe’s apparent removal from power.

Mnangagwa, widely believed to be behind the plot to oust Mugabe and his most likely successor as president, is another long-time friend and collaborator with the Chinese. A former freedom-fighter, he received ideological and military training in Beijing and Nanjing in the 1960s.

According to Professor Wang Xinsong, a specialist in international development at Beijing Normal University school of social development and public policy, China has been monitoring infighting within the Mugabe regime and the country’s faltering economy for some time – and carefully weighing its options.

Beijing was particularly alarmed by an “indigenisation” law effectively seizing majority control of foreign-owned businesses and companies, many of them Chinese. “China’s political and economic stake in Zimbabwe is high enough to demand a close watch on developments,” Wang wrote in a prescient commentary in December last year.

Wang predicted Beijing would stick with Zanu-PF rather than switch support to opposition groups – but would not tolerate political and economic instability indefinitely. “Letting G40 [the faction around Grace Mugabe] and Mnangagwa fight each other in a post-Mugabe scenario would be too risky. Rather, through negotiation and economic leverage, China may try to ensure a peaceful power transition while the ageing president is still active enough to make such an important decision.”

Whether this is what is happening now, as talks about a transition continued in Harare on Thursday, remains unclear. Much depends on whether Mugabe accepts forced retirement and gives his blessing to his successor, or tries to resist instead. But one thing is certain. Whichever path Zimbabwe chooses next, it will be heavily influenced by its “all-weather” friends in Beijing.