This year, a spate of attacks against foreigners in South Africa led hundreds of Zimbabwean migrants to return home and sacrifice income their families rely on. But it’s not just migrants who have been affected – the attacks have spelled trouble for many other Zimbabweans who depend on the South African economy. 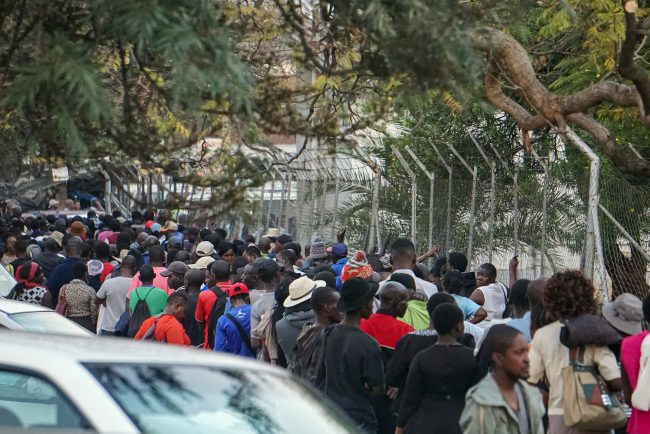 Long, winding queues form for public buses in Bulawayo, Zimbabwe. Some of these people have returned from South Africa, where violence against foreigners has increased in recent months and forced migrants to return home, where unemployment is high and fewer opportunities exist. Vimbai Chinembiri, GPJ Zimbabwe

While at home, Duze, 48, says he couldn’t provide for his wife, three children and parents.

“Life was difficult for me and my family because I was unemployed,” Duze says. “I could barely put food on the table.”

So Duze moved to Johannesburg, South Africa’s largest city, where many foreigners work and live. He soon found a job as a security guard at a food outlet. Duze was then able to send groceries and money back home.

But a xenophobic attack in September forced him to return to Zimbabwe.

“I could hear a group of people singing from far off, and suddenly there were screams. I knew it was happening again,” Duze says. “This is the second time I have experienced xenophobia in South Africa, but this time it was worse than previous years. This time, the situation forced me to return home.”

According to a 2017 study titled “The Double Crisis: Mass Migration From Zimbabwe and Xenophobic Violence in South Africa,” published by the International Centre for Migration Policy Development in Vienna, 20-30% of Zimbabwean migrants in South Africa are involved in the informal economy. The study states that 50-75% of those Zimbabwean migrants are under the age of 35.

Human Rights Watch found that xenophobic attacks in South Africa between August and September this year claimed the lives of two Zimbabweans, and about 170 were repatriated.

But returning home isn’t an option for many migrants because of Zimbabwe’s economic problems.

Most families in Zimbabwe survive on remittances from relatives who live and work in other countries.

According to the Reserve Bank of Zimbabwe’s 2019 Monetary Policy Statement, 2018 diaspora remittances amounted to $619 million, and South Africa contributes 34 percent of that total.

For people like Duze, life in Zimbabwe is more difficult because everything is more expensive.

“It has only been a month since I returned home, and my family is already feeling the effects,” Duze says. There is less food to go around, and his children’s school fees are only paid for one term, with no guarantee they can return next year. He struggles to pay bills and rent.

Duze is contemplating returning to South Africa once news of xenophobic violence dies down.

Duze’s situation is not unique.

“Since the attacks, my uncle has not been able to send us any money or groceries, as he is still looking for a safe place to stay and for another job,” says Buhle Mlotshwa, a 16-year-old girl whose uncle pays for her school fees, clothes and food.

Commuter businesses that transport Zimbabweans to and from South Africa have also been affected.

“I leave Bulawayo every Wednesday evening and return on Sunday morning with my sprinter full,” says Qaphe Ncube, a cross-border operator. “However, since the attacks, I now have less customers and my trips are now inconsistent.”

The ever-increasing prices in Zimbabwe’s shops have given rise to pavement supermarkets. Vendors along the city’s sidewalks sell the same basic goods found in retail shops, but at almost half the price.
They often buy goods from South Africa.

“I used to travel to Johannesburg every Saturday to buy goods to stock my shops,” says Nomathemba Msipa, a vendor. “However, ever since the attacks, I have reduced my trips to twice a month, as the situation there is unpredictable.”

In a written statement to GPJ, Simon Masanga, the permanent secretary in the Ministry of Public Service, Labour and Social Welfare, says officials are not advising people to avoid South Africa. In provincial and district offices across the country, government staffers offer safe migration advice and encourage travelers to have required documentation.

Masanga adds that these offices also offer social protection services. He says those who were assisted with repatriation from South Africa were provided with shelter, food, health services, an out-of-pocket allowance of 300 Zimbabwean dollars ($18) and transportation to their homes.

“The government of Zimbabwe successfully repatriated 90 Zimbabweans from South Africa in September,” he says.

Masanga says the ministry is aware of one person who lost his life through these attacks. That man’s remains were repatriated and laid to rest in his rural home in Chipinge.

Masanga says most of the people who fled the attacks were engaged in menial jobs, which require little or no training. “As a ministry we are of the view that the affected people should be assisted to access social protection services and that their individual needs should be addressed,” Masanga says.