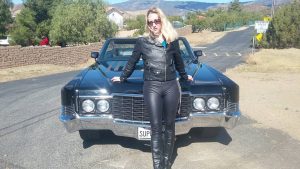 Hollywood – Devil’s Cove is a movie that was shot in California. It is a Thelma and Louise type thriller about a lesbian couple who commit a murder and have to flee for their lives.

The film  opened to great success at the New York  Film Festival where Zimbabwean actress, Chloe Traicos was nominated for two Best Actress Awards ( Best Leading Actress in a Feature Film and the Matthew Cowles Award for Best Actress)

The film went on to screen at Indiefest where Erik Lundmark, the director won Best Director in a Feature Film. Most recently the film screened at the Independent Filmmaker’s Showcase Awards in LA. It will be screening in two weeks in Kansas City Missouri.

Chloe is still based in LA. Later this year she is shooting “The Death and Life of Johnny G” with the legendary Judd Nelson.  Another movie Chloe wrote entitled “”Shylock” has been optioned by  a prominent production company and is being produced by Devin Cutler and Stewart Hall ( probably most famous for the Oscar winning movie ” Monster” with Charlize Theron)