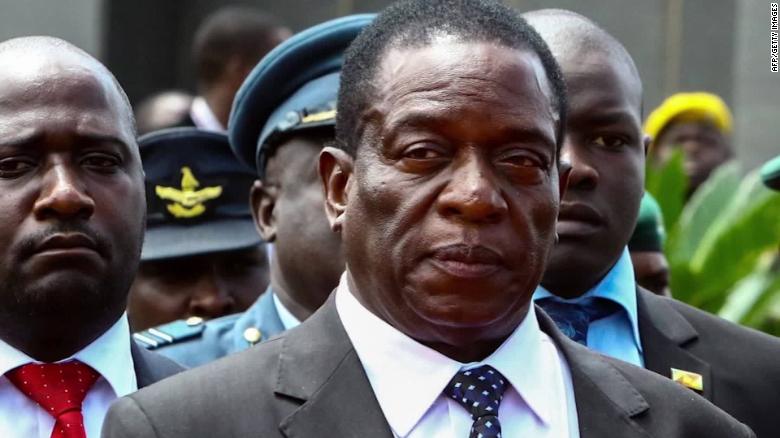 Zimbabwean President Emmerson Mnangagwa has struggled to control hyperinflation and stabilize the economy.

Mautsa’s only customer offered to buy a wheelbarrow of sand — a key ingredient in household construction works — at half the asking price. With little choice, he grudgingly agreed to sell at $70 Zimbabwean dollars (US$5 on the local interbank rate).
The father of five said his family has been forced to cut down on meals as the price of basic commodities soars thanks to hyperinflation.
“It has been a tough year. You simply cannot make enough to make ends meet,” Mautsa told CNN.
“On a good day, I make $200 Zimbabwean dollars, but lately business has been going down because the traders are too many. Last year was better, I could even save money for my children’s school fees, but this year inflation has decimated my income.” 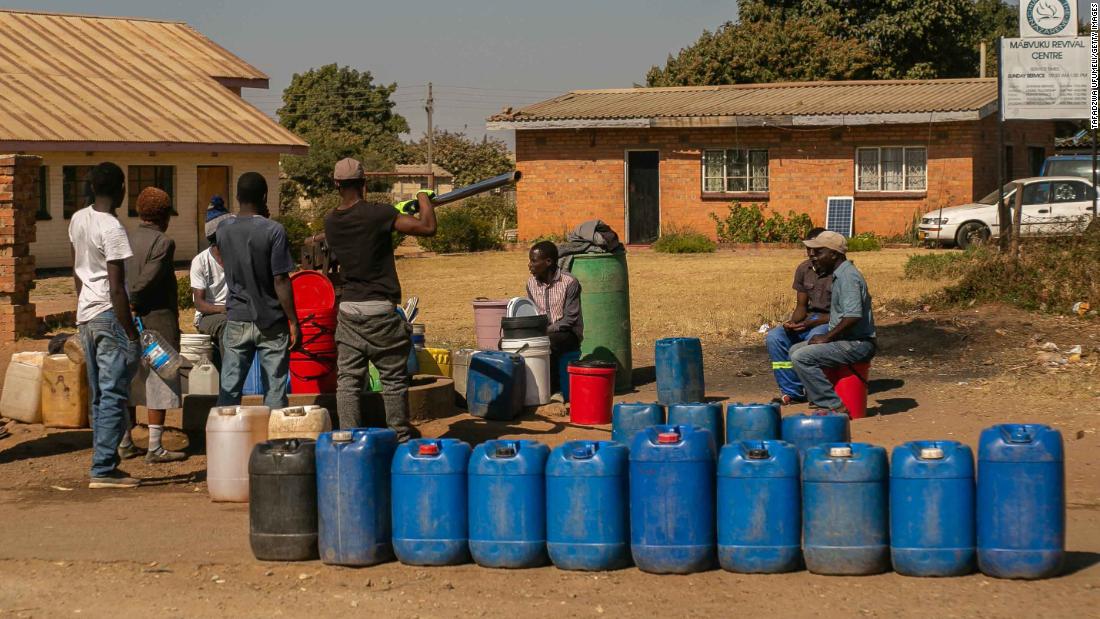 As well as hyperinflation, Zimbabwe has been hit by severe drought in parts of the country. The UN World Food Programme (WFP) warned on Tuesday that food supplies will run out in early 2020 unless urgent assistance is provided.
“As things stand, we will run out of food by end of February, coinciding with the peak of the hunger season — when needs are at their highest,” said Niels Balzer, the WFP’s deputy country director in Zimbabwe. “Firm pledges are urgently needed as it can take up to three months for funding commitments to become food on people’s tables.”
The WFP announced earlier in the month that $293 million was needed to provide 240,000 tonnes of aid to vulnerable communities in Zimbabwe.
Its director, David Beasley, has appealed to the international community to step up funding to address the root causes of long-term hunger in Zimbabwe.
According to the UN, more than 2.2 million people in urban Zimbabwe and 5.5 million others in rural areas are at risk of starvation due to a drought in the last agriculture season and a prolonged dry spell.
Poor rains have exacerbated the food crisis in the southern African nation which is also grappling with providing drinking water for its citizens.

A lack of social safety nets for the poor in urban Harare means many families have had to cut down on the number of meals they can afford to eat each day.
Mautsa said he had to watch his youngest daughter writhe in pain from a suspected case of pneumonia last month, and he could not afford her hospital bills.
The desperate father told CNN he had little choice but to borrow money from a loan shark who charged him extortionate rates of interest to pay her doctor’s fees, priced in US dollars.
“I think 2020 will be worse if the government does not do something to change our situation,” Mautsa said. “We do not need much, just food, a decent home and school fees for our children.”
As things stand, Mautsa said, he cannot afford those things. Adding to the hardship, rentals at his lodgings in the high-density suburbs of Harare are now also priced in US dollars.

Zimbabwe has banned the use of US dollars — preferring the Zimbabwe dollar — but its citizens still quote prices in American currency.

The official interbank market tends to be controlled by the central bank, and mostly does not reflect the currency’s real value, forcing many Zimbabweans to use black market dealers when trading foreign currencies.

At Matagarika Flats in Mbare, Gladys Chihunda, 62, cooks a meal for her four grandchildren. She told CNN that they sometimes go to bed hungry. Gladys Chihunda, 62.
“They haven’t eaten since yesterday, so I just bought rice for them. Last night we slept on an empty stomach. One of my grandchildren was returned from school because she was hungry,” Chihunda said.
Nearby, Esther Nyawondo, 35, has borne the brunt of taking care of her three children alone for the past year, after her husband was imprisoned.
“My husband was arrested last year. He is currently serving his six-year sentence. It’s very tough for me, I wish he was here to help me take care of the children,” a teary Nyawondo told CNN.
Other Zimbabweans see leaving the country as the only way out of grinding poverty; millions are estimated to have left in search of better opportunities elsewhere.

‘This country has reduced me to a pauper’

Natasha Munzara, 33, a street hawker who braves the blistering heat to eke out a living shouts herself hoarse attracting customers to her stall, but her meager earnings from selling vegetables and plastic wares are simply not enough to take care of her family.

The mother-of-three said she has been planning to leave Zimbabwe for the past two years, but has faced delays in getting a passport. And — crucially — she hasn’t been able to save enough money to care for her children in her absence.

Munzara said she lost her job as a professional chef at a local hotel last year. She believes finding work as a chef or even a maid in neighboring South Africa is the only way out for her family.

“Things are going up everyday. I rent two rooms and I have to pay US$30, which is way beyond what I earn. My husband is sick and he cannot provide for our family. This country has reduced me to a pauper. I am a professional cook,” Munzara told CNN.

“I have to get out of this country. We cannot continue like this until the next elections. I recently asked my aunt to register me for a food program, just to supplement our food at home, that is how bad it is.”

Zimbabwe’s economic woes are often blamed on its former ruler, Robert Mugabe, who led the nation for nearly four decades, until 2017. He died earlier this year.
New leader Emmerson Mnangagwa’s administration has struggled to stabilize the moribund economy and curb hyperinflation while a severe drought has crippled productivity.

Mnangagwa has blamed US sanctions for Zimbabwe’s economic crisis. The US imposed economic sanctions in 2003 on Mugabe and 76 other high-ranking government officials, accusing them of undermining democracy.

“The continued judgment setting of Utopian standards for Zimbabwe are callous, vindictive and should not be allowed to continue … enough is enough,” Mnangagwa told supporters at a rally in October.

However, he later pleaded for patience from Zimbabweans, acknowledging that the country’s economy was “dead.”

“I’m aware of the pain being experienced by the poor and the marginalized. Getting the economy working again from being dead will require time, patience, unity of purpose and perseverance,” Mnangagwa said.

At Parirenyatwa Hospital, one of the country’s biggest medical centers in Harare, Albert Sigauke, 21, waits impatiently for his aunt who has been taken into theater.
His aunt, a 40-year-old school teacher, suffered life-threatening burns as a result of a cooking gas explosion.

Sigauke says a prayer as he hopes for good news from the doctors — after hours spent trying to secure her a spot in the clinic’s intensive care unit.

“We came here at 2 am after trying other clinics close to our area. We could only get her admitted after 6 am. I am praying for the best. I just hope the burns are not that serious because we all depend on her as the breadwinner,” said Sigauke.

Sigauke’s story resonates with many Zimbabweans who cannot afford decent healthcare due to rising costs and the country’s ongoing doctors’ strike.

Many doctors in Zimbabwe — both junior medics and specialists — have been on strike for the past three months, in protest at their poor salaries and deteriorating conditions of service.

They accuse the government of failing to provide basics like bandages, syringes and gloves, and describe the country’s healthcare situation as a “silent genocide.”

“Hospitals are incapacitated… Our hospitals are in dire need of basic equipment to investigate simple conditions and also the fact that the equipment is obsolete. There is no water in the wards,” Zimbabwe Hospital Doctors Association treasurer-general, Tapiwa Mungofa told CNN.

Parirenyatwa was once a busy hospital, serving thousands of patients daily. It is now virtually derelict. Only a few wards are occupied by critically ill patients.

“The authorities are not saying anything about what is happening in hospitals. But we all know that people are dying. They are dying … avoidable deaths that shouldn’t happen when doctors are there,” Mungofa said.

Christianity is about a true relationship with Jesus Christ