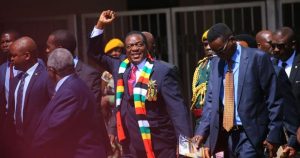 106 Zimbabweans living in Australia have written and signed a letter to Zimbabwean President, Comrade Emmerson Mnangagwa, thanking him for remarks he has made on various occasions before and after the 2018 harmonised elections that logistics will be put in place to allow Zimbabweans living in the Diaspora to vote in the 2023 elections. The letter, signed by all the 106 Zimbabweans, was sent through the Zimbabwean Embassy in Australia both in electronic and hard copy, and copied to the Speaker of Parliament, the Clerk of Parliament and leaders of the opposition in both the House of Assembly and in Senate, Honourable Thabitha Khumalo and Elias Mudzuri respectively. The Clerk of Parliament was requested to forward the letter to all members of the Parliamentary Portfolio Committee on Justice, Legal and Parliamentary Affairs with the hope that the issue be brought before Parliament and the necessary legislative reforms are put in place to allow Zimbabweans living outside Zimbabwe to vote in the next general elections.

Spokesperson of the group, Henry Jaji said the group expected other Zimbabweans living in Australia and elsewhere to join in the initiative to encourage the Government of Zimbabwe and Parliament to work out the formula for Diaspora vote before it is too late, seeing that the country seems to be going back into election mode following the early endorsement by Zanu PF Masvingo Province of Comrade Mnangagwa as the 2023 Zanu PF Presidential candidate. “Once parties start endorsing candidates for elections, you must know that the country has already gone into election mode, hence the need to expedite the placing in place of logistics to ensure that we vote in 2023”, says Henry.

Some of the Zimbabweans who signed the letter are, however, worried that the Government and the Zimbabwe Elections Commission have moved in too fast to plan to bring in the condemned Estonian e-voting system “may are surprised and think that the President jumped the gun when he opened negotiations with the Estonian Prime Minister Jüri Ratas on the side-lines of the United Nations annual general meeting seeking for assistance with an e-voting system since the Zimbabwe Elections Commission (ZEC) is meant to be an independent body whose decisions should not be influenced by the President of the country. In that regard, it is my considered view that the President, Comrade Emmerson Mnangagwa, rushed things when he discussed a specific voting system with his Estonian counterpart”, added Henry.

Equally surprising was the speed at which ZEC proceeded to court NetGroup Estonia to prepare for the electronic voting system when in the run up to the July elections ZEC had said they could not do anything about diaspora vote as legislation had not been amended to allow them to provide for the diaspora vote. “My understanding is that the reforms which ZEC sighted as the reason they could not facilitate the Diaspora vote was legislation, and to my knowledge the legislation has not been revised yet, so where is all this coming from?” asked another Zimbabwean who read media revelations that ZEC was already working with the Estonia company to prepare for diaspora voting.

The Integrated Electronic Case Management System (IECMS) developed by the Estonian company has been condemned globally as being not fit for purpose. According to global media reports, the Estonian electronic voting solution’s flaws were discovered by a team who were accredited to observe the October 2013 municipal elections. They said they observed election officials downloading key software over insecure internet connections, typing PINs and passwords in view of cameras, and preparing election software on insecure PCs. It has been rejected by other countries globally because its security vulnerabilities could lead to faked votes or totals, according to independent researchers.

There is concern that an electronic voting solution cause further dispute as the ZEC does not allow other contesting parties to assign their IT experts to jointly monitor the server in which the election data is held. In this election, even the Constitutional Court denied evidence from the server after one of the candidates who claim to have been informed by insiders that the electronic data had been manipulated to give President Mnangagwa victory.

In its request, the group that signed the letter to President Mnangagwa requested that polling stations be created in the countries with Zimbabweans as was done in the Rwandese elections, and as is done by other African countries as well as other developed countries.