Zimbabweans protest against vice-president being treated in SA hospital 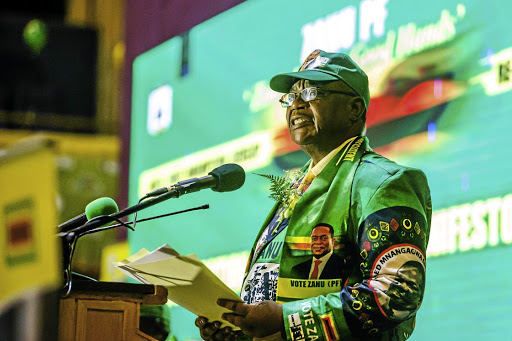 Zimbabweans on Monday staged a protest outside Groote Schuur Hospital in Cape Town to demand that their vice-president Constantino Chiwenga does not get treated there.

According to hospital management, however, Chiwenga is not a patient there.

Hospital spokesperson Alaric Jacobs said: “In honour of our commitment to patient confidentiality, we cannot discuss patient details. However, we can confirm that he was not – or currently is not – an in-patient at the hospital.

Zimbabweans based in Cape Town, South Africa on Monday staged a demonstration at the UCT hospital demanding that admitted Vice President Constantino Chiwenga be discharged and sent back home. pic.twitter.com/8fMshhKfSj

“While we understand the concern of the Zimbabwean community, we need to balance this with the rights of other patients to receive care.”

Asked whether there were any disruptions at the hospital due to the protest, Jacobs said this was not the case, but it was nonetheless unpleasant to have protests outside the facility.

He called on the Zimbabwean community to rather direct their queries and concerns to Zimbabwean authorities.

Chiwenga was reportedly rushed to a South African hospital for medical treatment. It is unclear what ailment he is apparently suffering from.

Many took to social media to express their views on Chiwenga allegedly receiving treatment in the country. Some accused him of having a hand in what they deemed to be Zimbabwe’s crippled healthcare system – and called for him to be subjected to the same medical treatment that ordinary Zimbabweans are offered.

Zimbabwean Vice President Constantino Chiwenga should be denied medical care in South Africa and be forced to use what’s available in Zimbabwe since that’s what they delivered for Zimbabweans,that’s the only way politicians from fellow African countries will learn

“Go back to your kantiri!”

Zimbabweans and South Africans are converging outside Groote Schuur, a Cape Town hospital where Vice President Constantino Chiwenga is reportedly receiving treatment. The protesters want him to return to Zimbabwe and seek treatment there pic.twitter.com/UP00mHAZU1

What happened to affordable, quality healthcare guaranteed? Why does Chiwenga run to SA for treatment? This government is just incompetent. #263Chat #ZimbabweAtrocities #ZimbabweCrisis the man is ill but fires those qualified to treat the sick, then runs to SA for treatment ? pic.twitter.com/wCwNLPbSmq