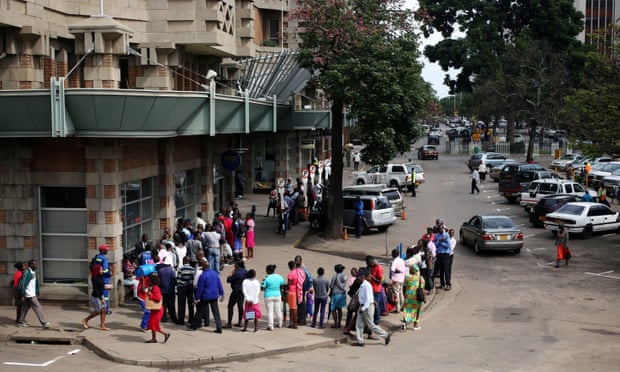 In recent days, some vital commodities have become scarce, with motorists in Harare, the capital, spending a night in their cars in queues outside petrol stations, supermarkets rationing purchases or shutting entirely, and chemists unable to provide some basic medicines. Food prices have soared.

The immediate cause of the crisis was the introduction of a new tax on electronic transactions, but its roots lie in the 37-year rule of Robert Mugabe, Energy Mutodi, the deputy information minister, said.

The new 2% levy is intended to raise revenue from the vast informal sector that has mushroomed in recent decades.

“This is an economy that is dealing with the legacy of … Mugabe. We are now in a new dispensation … so there are a number of economic issues we need to correct. There was a shock and now prices are beginning to adjust downwards,” Mutodi said.

Elections in July, the first after the ousting of Mugabe in a military takeover in November, were won by the autocrat’s former righthand man, Emmerson Mnangagwa.

Mnangagwa’s campaign slogan was “Zimbabwe is open for business”, and ruling party officials hoped the poll would lead to a new wave of international investment and aid to allow the country to pay off some of its massive external debt, estimated at $18bn (£13.8bn). Arrears of about $1.8bn make it hard to obtain further loans.

But although the elections in July did not bring the systematic violence of polls under Mugabe, alleged irregularities during the count and violent repression following the vote have resulted in lukewarm support for Mnangagwa and Zanu-PF from major international powers.

“Zimbabwe very much needs to access multilateral funding for its debt and if that doesn’t happen we will be in crisis,” Mutodi said. “Like anywhere the elections can’t be free and fair in the eyes of everybody. Now we really need to deliver on our election promises and the government is doing everything we can to do that.”

Tendai Biti, a prominent leader of the Movement for Democratic Change, the main opposition party, said the government was entirely to blame for “a complete disaster”.

Zimbabwe abandoned its own currency a decade ago amid hyperinflation, with a mixture of dollars, pounds and south African rand circulating instead.

But there is a shortage of hard currency, and confidence in government bond notes – a surrogate introduced in 2016 to ease the cash shortage – has collapsed. The bonds are now worth between a third and a sixth of their nominal value and are increasingly rejected as tender by businesses.

Conditions for ordinary people have deteriorated since the election, particularly in recent days.

Melda Masvanhure, a 42-year-old high school teacher from Harare, said the cost of her diabetes medication had trebled and her pharmacist wanted payment in US dollars.

“It is now expensive to be sick in Zimbabwe … My salary can no longer buy the basics let alone my expensive medicine,” Masvanhure told the Guardian.

Some have been forced to travel to neighbouring South Africa or Zambia to buy medical supplies.

”I am in shock. Surely government must do something, or else we die,” she said.

Mnangagwa described the new tax as a “necessary pain”.

“We are on a shared journey to a better and more secure future. The road is long and winding and at times bumpy but there is no other way,” he said in a statement.

The president recently named Mthuli Ncube, a former chief economist at the African Development Bank and a lecturer in finance at the London School of Economics, as finance minister.

Ncube has spoken of the need for radical reforms and the choice was welcomed by observers.

There are 141 entities and individuals in Zimbabwe, including Mnangagwa and Mugabe, under US sanctions.

In a radio discussion on Wednesday, Brian Nichols, the US ambassador, saidWashington believed that leaders in Zimbabwe were committed to changeand that a programme of wide-ranging reforms would “address concerns”.

But the opposition is sceptical. “You can’t reform without reformers,” Biti, a former finance minister, said. “We need a paradigm shift from predatory to inclusive politics. You can give this country billions of dollars but you won’t have resolved anything. All you will have done is entrench the regime.”

Few people in Zimbabwe have jobs, and infrastructure is crumbling. At least 50 people have died in a cholera outbreak caused by sewage leaking from broken pipes into drinking water in Harare.

“My income is lagging behind price hikes. My landlord now demands double the rentals I used to pay. My child’s school fees may rise … But I cannot afford,” Brodwell Hamandishe, a 31-year-old software developer in Harare, said.

The UN has said that more than a million people need food aid, with more expected to need help if predictions of droughts later this year and in 2019 prove correct.

There are signs of growing unrest. Police banned a recent protest, citing concerns over disease, and arrested organisers.