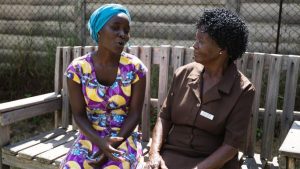 It looks like an ordinary park bench. But Josephine and a gaggle of other women sitting on the ground knitting bags from old video tapes in a township south of Harare know it as the friendship bench. It saved their lives.

Decades of economic crisis and repression under Robert Mugabe, as well as widespread Aids, have left Zimbabwe with one of the world’s highest rates of depression and suicide. Yet it has few psychiatrists as many of the country’s brightest people have fled.

The first real test of whether Zimbabweans are moving on from the horrors of the past will be whether the elections next month are genuinely free and fair. But the mental legacy is deep.

“We are a very traumatised population,” said Dixon Chibanda, 50, one of 14 psychiatrists in the country of 14m. “There was euphoria when Mugabe was removed in November but the trauma is so big and has gone on for such an extended period that the wounds won’t heal overnight.”

Using benches as an open-air therapist’s couch was his brainchild. Trained grannies in brown dresses offer frank advice and turn lives around on friendship benches across Harare.

People talk about being gang-raped, husbands who beat them and sleep with other women or struggles with grief, illness and promiscuous daughters.

“After my husband died I was always moody, hitting my two daughters for no reason and shutting myself in the room and not going out,” said Ivy Zvavanjanja, 36.

“I thought counselling was a waste of time but I’ve had four sessions on the bench and my life is much better. The grannies made me realise I must be strong for the children and give them love and helped me set up a small business selling vegetables.”

“Grannies are such a powerful resource,” Chibanda said. “Imagine all the wisdom and wealth of experience someone has by the age of 80. They’re rooted in their community and have amazing empathy and they give great big hugs!”

The project began in Mbare, one of Harare’s largest and poorest townships. It started with two benches and 14 grandmothers who were provided with a month’s training and a mobile phone.

There was a problem, though. The seats were initially called mental health benches and no one would sit on them — this is a society where the mentally ill are regarded as being possessed.

The grandmothers came up with the name friendship benches and the project took off. They are seen as a safe place for people struggling with what is known in Shona as kufungisisa or “thinking too much”.

There are now more than 100 benches throughout Harare and they have treated more than 30,000 people. The plan is to have benches across the country within five years, depending on funding. There is also talk of bringing the idea to Britain.

The project gets support from the Wellcome Trust and Comic Relief while the city health authorities provide uniforms and training venues as well as a small allowance to the grannies, although many are volunteers.

One of the grannies is Benjina Madura, 71, who has seven grandchildren. Over her brown dress she wears a blue T-shirt with the slogan kuvhura pfungwa or “opening the mind”.

“Our community has high rates of domestic violence and suicide and many people with HIV,” she explains. “Housing problems — many shacks have five sharing a room and more than one family in the same unit. Fights easily start. There is a lack of love. We have very high rates of divorce and suicide but friendship bench has helped to reduce stress.

“People are often reluctant when they first sit because of stigma but we explain what they say is confidential and that if we see them in the community we will just say hello, not disclose anything.”

Her most challenging case so far was a woman who not only wanted to kill herself but also her husband and children with rat poison because he was promiscuous and hardly slept at home.

“I explained to her I was involved in similar situation and look, here I am, problems come and go,” said Madura. “Now she’s still with her husband.”

“I was so stressed and depressed I couldn’t even do my job,” he says. “When the clinic suggested coming to the bench, I was very sceptical. But I’ve now had six sessions and started being able to concentrate and to work and look after my family.”

According to Chibanda, the biggest problem is post-traumatic stress disorder (PTSD). “People generally associate PTSD with war and we do have those who fought in the liberation war,” he says. “But it’s the pervasive, persistent traumatic events under Mugabe.”

He cites the Matabeleland massacres of the 1980s and Operation Murambatsvina, when Mugabe’s thugs bulldozed the homes of 700,000 people. “Farm invasions, police brutality, torture, beating of opposition . . . Until we open up and start to address these issues we won’t get healing in our country,” he says.

“What we have done shows the value of taking mental health to the community. If I had the choice I would destroy all institutions and put the money into community programmes.”