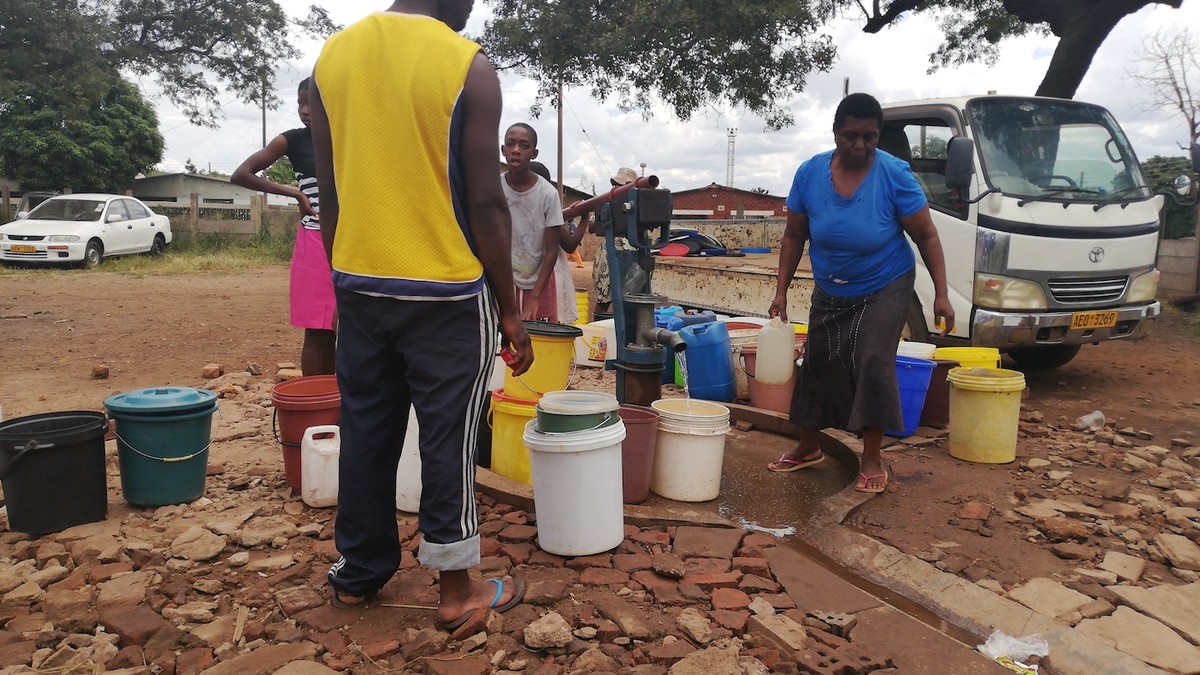 Tens of thousands of people are forced to crowd around communal boreholes as authorities struggle to provide running water.

Chiedza Mazhindu stood outside her apartment block in Mbare, a densely populated suburb of Zimbabwe’s capital, Harare, waiting for a truck.

The 55-year-old is a volunteer at Mbare’s hand-washing stations, so when that water delivery truck arrived – to fill up a 200-litre tank used by thousands of local residents – Mazhindu began to sanitise the delivery, ensuring there was enough detergent mixed into the water.

“Most people cannot afford to buy soap amid shortages of clean water here in Mbare,” said the mother-of-four. For the past five years, she added, she has only had access to running tap water an average of three times a week.

AS THE WATER CRISIS IN HARARE DEEPENS, NGOS INCLUDING GOAL AND UNICEF ARE PROVIDING CLEAN WATER IN MBARE. PHOTO: GOAL ZIMBABWE

As incomes across the country continue to fall, basics such as soap and hand sanitiser are too expensive for most. The lack of access to running water and soap means that most of Harare’s residents fetch it from open wells in the wetlands, while others head to the area’s few community boreholes, where they risk contracting COVID-19 due to overcrowding, complicating Zimbabwe’s fight against the virus.

Over 200 people in the southern African country have now died from coronavirus, while more than 7,000 people have been infected. Harare, the epicentre of the crisis, is struggling to provide water to its more than 2 million population, blaming poor infrastructure and the impact of a two-year drought that has seen water levels drop in Lake Chivero, the capital’s main water source.

Harare has a demand of about 1.2 billion litres per day, yet the city is only pumping an average of 170 million litres. In some suburbs, private companies are cashing in with home deliveries, but only for the small amount who can afford it.

“Water is a perennial problem that we need to solve,” the city’s new mayor, Jacob Mafume, recently said on Harare’s official Facebook page.

“What we have at the moment is that we have two dams that have run dry and we have a plant that we had to decommission. That has put pressure on the two sources of water that is Manyame and Lake Chivero. Yes we have been managing, there has been water to some suburbs, but we are not where we ought to be. We ought to do better.”

In Bulawayo, Zimbabwe’s second largest city, some residents have spent up to three months without running tap water, as reservoirs run dry – at least partially – because of global warming.

“The situation is bad,” said Ambrose Sibindi, who runs the Bulawayo residents association. “When residents access water from the few boreholes, they will not be observing any social distancing.”

The situation has made it impossible for Itai Rusike, an executive director at Community Working Group on Health, to preach good hygiene. “This is negatively affecting the COVID-19 health literacy response,” Rusike told VICE News. “It is becoming very difficult to continue urging the residents to regularly wash their hands in order to prevent COVID-19 when people do not have water in their homes.”

In response, NGOs such as GOAL Zimbabwe and the United Nations Education Fund have teamed up to establish more than 50 hand-washing stations in Mbare through the water, sanitation and hygiene (WASH) Prevention and Response project, which started in June and is expected to end later this year.

Rueben Chihombe, 48, another water-station volunteer, explained that it’s not just coronavirus people have to worry about. “Before coronavirus we were already facing risks of typhoid and cholera,” he said. “We get water twice a week at this [block of] flats. Unfortunately, it’s during the night.”

GOAL Zimbabwe’s target is to eventually reach a total of 360,000 people in Mbare.

“Mbare is one of the most high density areas in Harare, with high population congestion,” said Gabriella Prandini, GOAL’s country director. “The popular Mbare market is a central congregation point for farmers from various parts of the country – both rural and peri-urban areas – coming from outside Harare to sell fresh farm produce.”

She added: “Mbare has arguably the busiest bus terminus in the country for inbound and outbound traffic, for which there are high volumes of people who pass through it on a daily basis. The high population density at any given time makes Mbare a high-risk for possible coronavirus community transmission and spread.”

Harare’s Residents’ Trust director, Precious Shumba, said the intervention by NGOs is welcome, but city authorities need to come up with a long-term solution to the water crisis.

“Only a few residents are benefitting,” said Shumba. “Community shallow wells are drying up, and with very few community boreholes, the demand for water continues to rise without any sustainable solution in sight.”

Mayor Mafume has promised that, in the long term, the city will work with the government and the private sector to build enough dams to match its growing population.