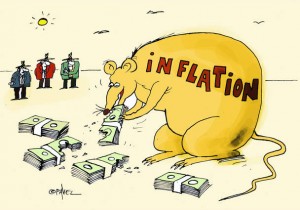 According to ZimStat, inflation rose to 0,78 percent in September on a year- on-year basis, from 0,14 percent in August.

RENOWNED professor at The John Hopkins University, Steve Hanke suggests in his latest note that Zimbabwe’s inflation has in fact, reached 332,62 percent, not the official 0,78 percent.

Hanke’s calculations are based on the application of Purchasing Power Parity (PPP) on the stock price of the insurance and investment company Old Mutual, which is listed on both the London Stock Exchange and the Zimbabwe Stock Exchange.

At the height of Zimbabwe’s hyperinflation, which ended in February 2009 when the country dollarised, the bulk of transactions between the fast-devaluing Zimbabwe dollar and other currencies, primarily the US dollar, were calculated using an Old Mutual Implied Rate.This market-driven rate used the price of the Old Mutual share on the LSE against the corresponding price on the ZSE.

Since the introduction of the surrogate currency, bond notes, last year and Old Mutual started to trade at a premium relative to its price on other stock exchanges, analysts started using the OMIR as a gross indicator to measure how Zimbabwe assets are overvalued.

According to Hanke, it is also a reliable indicator of Zimbabwe’s true inflation rate.

The International Monetary Fund has projected inflation to close the year at 7 percent while the government expects it to be between 3 percent and 4 percent.

Experts said inflation figures reported by Zimstat, the official provider of statistics, do not capture the high prices borne by the consumer as prices of most items have risen by approximately 20 to 70 percent in retail outlet across the country.

“There is a mismatch between what the consumers are facing (in terms of the prices of products) and what is reported by ZIMSTAT, clearly the inflation figures do not reflect the price increases we are witnessing in the economy,” an economist said.

“Most of the prices have moved up by at least 20 percent to 50 percent in line with the parallel exchange rate.”

However some analysts said it’s important to evaluate the individual items that makes up the final inflation figure.

“The problem is that our inflation basket captures too many things and so the quantum of items that are included in the basket dilute the increases of some products, in particular basic commodities,” an analyst said.

According to ZimStat’s latest numbers for September, food and non alcoholic beverages contributed 33,5 percent while housing water, electricity and other fuels contribute 17,7 percent. Other major contributors include furniture and household equipment which have a weight of 9,9 percent while transport contribute 9,8 percent.

According to Zimstat food inflation has remained in the positive territory since February.

However, non food inflation has largely remained in the negative territory due to waning disposable incomes which have left consumers with little money to spend on basic commodities. Huge discounts obtaining on cash purchases on durable goods and other services also contributed to a negative non food inflation.

“Official data fail to justify the reality of an increase in prices when paid for using electronic channels and bond notes. There is growing disparity between official data and what is happening on the ground as official data measure inflation using quoted and displayed hard currency cash prices,” it said in recent research note.

Based on its tracked consumer basket, year-on-year inflation topped 65 percent in September, reflecting the sudden increase in prices caused by panic buying in the same month.

The Consumer Council of Zimbabwe (CCZ), which carries a survey every month to assess the consumer basket, also witnessed a significant increase in prices.

“We are witnessing a considerable change in the prices of basic commodities on a monthly basis , especially from the survey we did in September. Prices have increased significantly although some items remain unchanged. Moreover, there are no price decreases at the moment, it’s either an increase or the price remains unchanged,” an official from CCZ said.

Some analysts say the October inflation figures should fairly reflect what is really happening on the ground following the panic buying that happened last month.

“The inflation figures are not reflecting what is happening on the ground, which makes us doubt the authenticity of these statistics. However the October figures should capture the price increases that have happened, especially after the panic buying that happened in September,” an analyst said. The Source