Zimbabwe’s Military Junta Shows its True Colors to the World 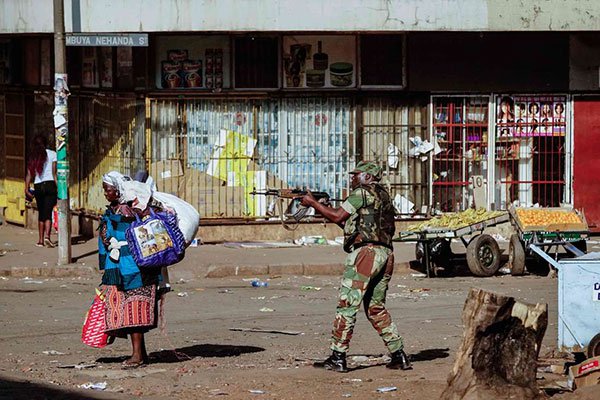 Late into the night on August 2, Emmerson Mnangagwa – who seized control of the presidency by a military coup in November 2017 – was declared winner by the Zimbabwe Electoral Commission (ZEC). According to ZEC, Mnangagwa secured 50.8% of the overall vote, just enough to avert a runoff election against his main challenger, Nelson Chamisa of the Movement for Democratic Change Alliance.

Although ZEC announced that Mnangagwa had won the election outright, serious doubts about the integrity and credibility of the vote remain, including the patently unfair pre-electoral environment. Additional concerns such as the evident partiality of ZEC; the inaccuracy of the voters’ roll and lack of integrity of ballot papers; reports of ballot-stuffing and mounting vote tallying irregularities; systematic and well-documented intimidation by the ruling party and its agents; as well as the illegal involvement of the military before, during and, most appallingly, after the election all raise the specter of an unfree and unfair election — one that does not meet regional standards or come close to reflecting long-established international norms.

That Zimbabwe’s military and security apparatus engaged in a brutal crackdown on unarmed protesters – in broad daylight and in full view of international media personnel – once again highlights the severe discrepancy between the government’s rhetoric of “unity” and its actions on the ground. Scenes of soldiers opening fire on and bayoneting protesters, which resulted in the deaths of at least six people – including several who were shot in the back – caused rightful international alarm. A full-scale military crackdown akin to 2008 is now a plausible scenario (it should be noted that during the 2008 period, Mnangagwa was Zimbabwe’s head of state security and current Vice President Chiwenga the military chief).

The post-election crackdown now being engineered by the Mnangagwa regime has resulted in dozens of civic and political activists fleeing for their lives and going into hiding. The most noteworthy example is that of Tendai Biti, a high profile opposition leader and former Finance Minister, who, as of this writing, is reportedly being deported back to Zimbabwe after being detained at a border crossing. If Biti is sent back to Zimbabwe, after seeking asylum, this would amount to a violation of international law. Police accuse Biti on trumped-up charges of “inciting violence.” It is safe to assume that his life is in serious danger. Ironically, at the same time, the security professionals who gunned down and killed unarmed civilians remain free and in their posts (while Mnangagwa continues to implausibly deny that he gave the orders).

Each of these deep concerns in Zimbabwe – on their own – is enough to cast critical doubt on the overall integrity and fairness of Zimbabwe’s election. In totality, it suggests that the vote does notreflect the true will of Zimbabwean citizens and paints a dark picture of the weeks, months and potential years to come under Mnangagwa’s leadership.