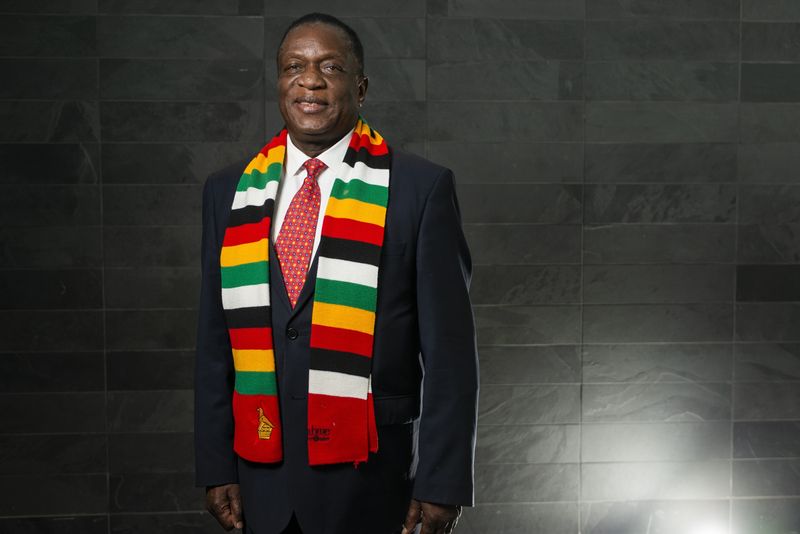 Zimbabwean President Emmerson Mnangagwa said relations with the U.S., which imposed sanctions in 2003, are the best they’ve been in decades and he’s moving as fast as possible to reform a collapsing economy.

Mnangagwa, 76, reinforced a pledge to re-engage with the international community and attract the investment needed to spark economic growth in the southern African nation. So far he’s struggled, with inflation estimated by economists at between 230% and 570% and the economy poised to contract for the first time since 2008.

When he became president in late 2017 after a coup ended Robert Mugabe’s four-decade rule, Mnangagwa inherited a nation beset by U.S. and European Union sanctions on its leaders and state companies, $9 billion of debt and an economy decimated by the state’s seizure of commercial farms that accounted for much of its exports.

“We have rejoined the family of nations,” Mnangagwa said in an interview with Bloomberg Television at the World Economic Forum on Africa in Cape Town. “I am happy that dialog with the Trump administration is ongoing. I am happy with the progress we are so far making, which has never happened in the last 20 years.”

The removal of sanctions, which also target Mnangagwa himself, are one of a laundry list of hurdles the president needs to overcome to revive the economy. Until it has repaid its arrears to the World Bank and African Development Bank, the government can’t borrow more money from international lenders, and an unstable currency regime is deterring foreign investors.

Most Zimbabweans are unemployed and many have immigrated in search of economic opportunity.

Still, the president, a close ally of Mugabe for 50 years before falling out of favor in 2017, is confident progress is being made. Relations with the Group of Seven industrialized nations are “warm,” he said.

“We are moving at the pace of what is possible. We know where we want to go,” he said. “We are beginning from the bottom of the trough. I am in charge of my country, and I must look at what is necessary to resurrect and to grow my economy.”

Last year, Mnangagwa appointed Mthuli Ncube, a technocrat with no political affiliations, as finance minister. While spending has been curbed and a number of economic reforms rolled out, investment in the country’s key agriculture and platinum mining sectors has been slow to arrive.

“There are resources at our disposal,” he said. “The resources we have must be exploited, we must create a situation, an environment to attract global capital.”

Assistance from the G-7 in easing Zimbabwe’s debt is predicated on democratic reforms taking place in parallel to the economic steps.

Only two weeks ago, Zimbabwean police forces violently dispersed a small, largely peaceful protest against deteriorating living conditions. They used tear gas and batons and beat a woman unconscious as tourists and journalists observed the demonstration from the balcony of the most famous hotel in the capital, a visible demonstration of the crackdowns that have led to Zimbabwe’s isolation.