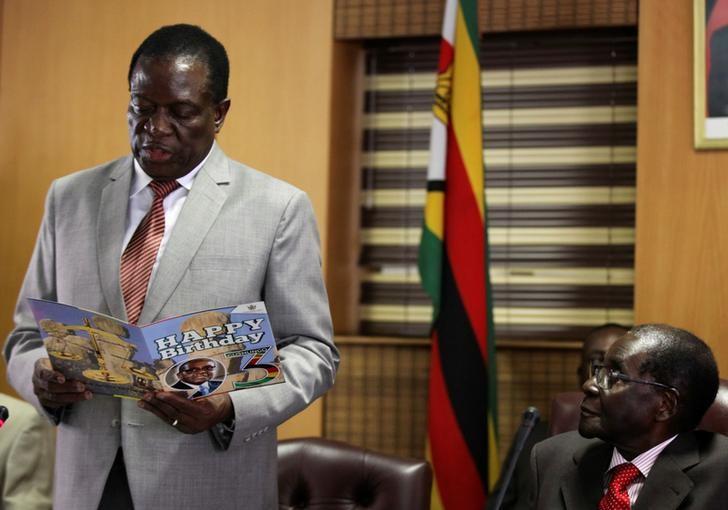 Mnangagwa’s removal provides a boost for Mugabe’s wife, Grace, who has been a vocal critic of the vice president and is also seen as a potential successor to her husband.

“It had become evident that his conduct in his discharge of his duties had become inconsistent with his official responsibilities.”

Mnangagwa’s top aide Christopher Gwatidzo said he had not seen the statement by Khaya Moyo and declined to say whether the vice president had been at his office on Monday.

Grace, 52, nicknamed “Gucci Grace” for her love of shopping, called Mnangagwa a “coup plotter” and a “coward” on Sunday in a speech that inflamed an already bad-tempered rift in the ruling Zanu-PF party.

It followed a speech by Mugabe at a rally on Saturday where he publicly rebuked his deputy for the first time.

The reaction of the military could be key. Some army generals backed Mnangagwa to succeed Mugabe and have publicly said they will not allow someone who did not fight in the 1970s independence war to rule. Grace did not fight in that war.

Grace made international headlines in August when a South African model said the Zimbabwean first lady had whipped her with an electric cable in a Johannesburg hotel suite. Grace denied the allegations.

The fight over the future control of ZANU-PF has overshadowed an economic crisis marked by chronic shortages of cash and spiraling prices of goods that has raised fears of a return to hyperinflation.

Mnangagwa was Mugabe’s protege and had been at his side through five decades of prison, guerrilla war and then post-liberation government, and questions are being raised about what caused the fallout between the two men.

By firing Mnangagwa, Mugabe has removed one of his last remaining liberation war comrades who have stood by him since independence from Britain in 1980.

However, Grace said on Sunday Mnangagwa had always been plotting against her husband, even months after independence.

Mnangagwa’s biggest undoing may well have been his vocal supporters, who kept prodding Mugabe to step down. Mugabe has a history of punishing ambition in ZANU-PF.

Relations also cooled between the two men in August after suggestions by Mnangagwa’s allies that he had been poisoned by ice cream from a dairy owned by the Mugabes.

That Mnangagwa’s expulsion was announced by a government minister and not the chief secretary to the president and cabinet also spoke to the deterioration in the relationship.

Mugabe plans to contest elections due next year and will likely face a weakened and fractured opposition.

His main rival Morgan Tsvangirai has been in and out of a South African hospital after announcing he had colon cancer in 2016.