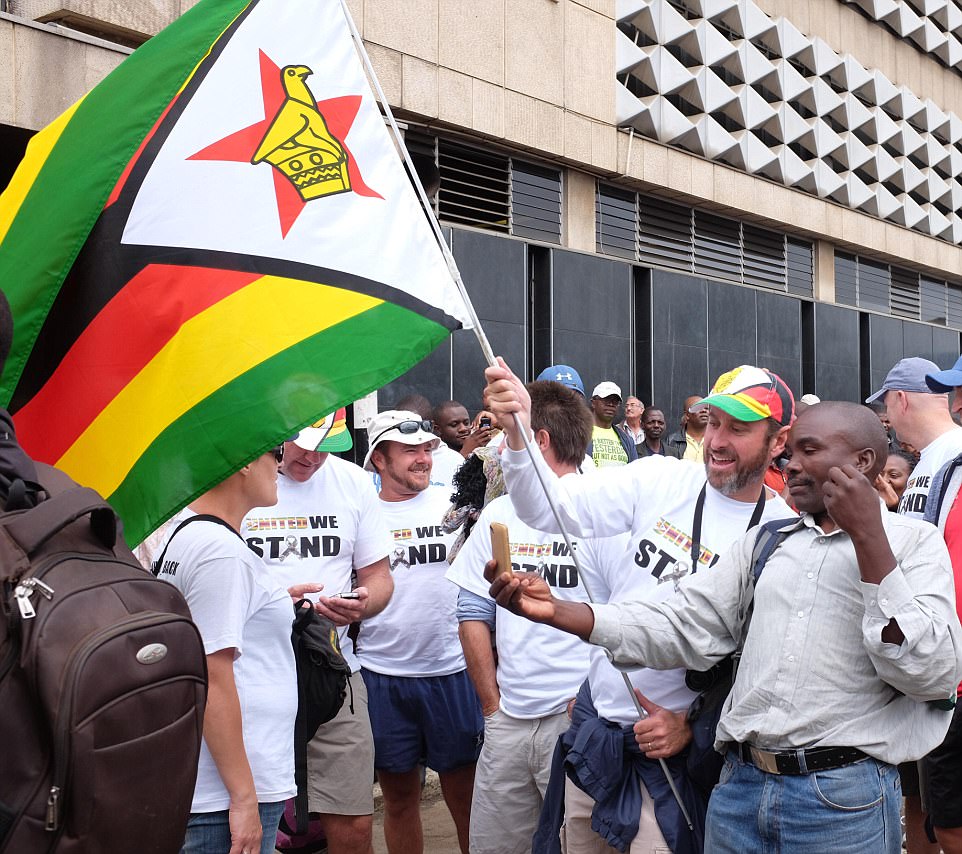 Zanu PF has sacked the president and replaced him with Emmerson Mnangagwa, the deputy he dismissed two weeks ago

The ruling party of Zimbabwe has voted to sack Robert Mugabe as its leader and has appointed in his place the vice-president the veteran autocrat fired two weeks ago.

The vote by hundreds of senior Zanu-PF officials in Harare on Sunday significantly weakens the position of Mugabe, who has refused to step down following a military takeover last week, despite huge marches demanding that he leaves power.

Zimbabwe’s parliament will reconvene on Tuesday after a week-long suspension and is expecting to move to impeach the president if he has not given up power.

The committee also expelled Grace Mugabe, the divisive first lady, who had been chair of the party’s women’s league.

When the motion was passed, removing Mugabe from the head of the party and reinstating Emmerson Mnangagwa to replace him, the hall broke into cheers, song and dance.

The 200 or so members of the central committee leapt to their feet, many singing Mnangagwa’s name.

“This is the day that is defining the new birth and development of our country,” said Mike Madiro, chairman of one of the provincial party branches that had formally set Mugabe’s dethroning in motion.

Chris Mutsvangwa, head of the powerful war veterans’ association, said Mugabe was running out of time to negotiate his departure and should leave the country while he could.

“We are going all the way,” Mutsvangwa said. “He’s trying to bargain for a dignified exit.”

The Zanu-PF central committee appointed Mnangagwa, the 75-year-old vice-president who was fired by Mugabe almost two weeks ago, as its new interim leader.

Mugabe’s sacking of Mnangagwa precipitated the crisis, with Mnangagwa and the army rapidly launching a previously planned takeover.

A second round of talks on Sunday morning between Mugabe and the army commanders who led the takeover was inconclusive.

According to sources close to the military, the president, who has been kept under house arrest in his sprawling residence in Harare, continues to argue that the takeover is illegal and wants to be allowed to remain in power until the end of his presidential mandate next year. Elections are due to be held before August.

A source said that Mugabe believed regional powers, who have not explicitly backed the military takeover and have called for the crisis to be solved constitutionally, would support him.

But few options are now open to the autocrat, who has ruled Zimbabwe through a mixture of coercion, bribery and revolutionary rhetoric for nearly four decades. Support in some branches of the security establishment – such as the police – has evaporated and high-profile political supporters have been detained.

The military has said it has no intention of staying in power. Army commanders worked closely with Mnangagwa before the takeover.

Mnangagwa is a former intelligence chief and veteran Zanu-PF official who was responsible for the repression of opposition parties in successive elections between 2000 and 2008.

There was applause and singing from Zanu-PF officials when the agenda for the meeting on Sunday morning was read. Item one was the “recall” – or sacking – of Mugabe as as party leader.

The role of Obert Mpofu, the finance minister long seen as a loyal associate of Mugabe who had substantially benefited from his rule, prompted widespread comment. Mpofu said the “outgoing president” had been surrounded by “wrong people”.

His words echoed those of the military commanders who claim last week’s takeover was necessary to remove “criminals” close to the president, a reference to Grace Mugabe and her “G40” faction.

Opposition leaders in Zimbabwe have called for the formation of an inclusive transitional government but risk being sidelined by the powerful army and Zanu-PF.

There are also concerns that the military will maintain significant influence in the future.

“The ruling party have allowed the military to taste political power [and] … We have to expect some role of the armed forces to continue for some time,” said Martin Rupiya, a former Zimbabwean army general.

Since taking power, the military has arrested about a dozen senior officials and ministers loyal to the first lady. Several were also expelled from Zanu-PF at the meeting on Sunday morning.

Grace Mugabe, 52, has not been seen since the takeover. Sources told the Guardian she was in her husband’s Harare residence when he was detained on Tuesday and has not moved since.