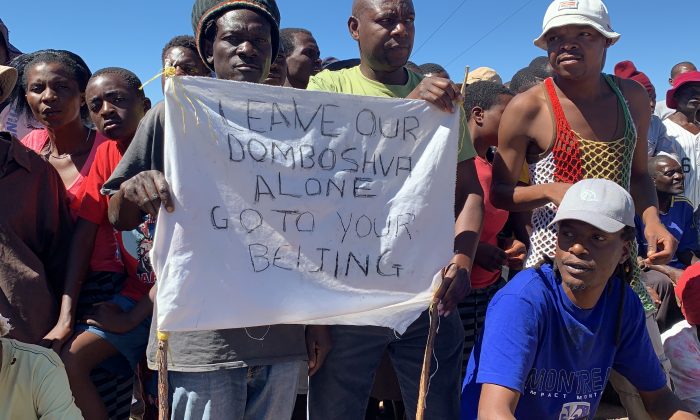 Villagers demonstrate against a Chinese company in Domboshava, Zimbabwe, on May 6, 2019. (Courtesy Columbus Mavhunga)

MUTARE, Zimbabwe—Zimbabwe’s rural communities are beginning to stand up to Chinese companies operating in the country, as evidenced by the recent demonstrations against plans for a mining project in the Domboshava area, north of the capital Harare.

Villagers in Domboshava have been sending petitions to the government and holding protests against the quarry mine proposed by China Aihua Jianye, saying it would negatively affect more than 20,000 people, as well as clinics, schools, heritage sites, and graveyards in the area.

Mining activities by Chinese companies in various parts of the country have had serious impacts on the local environment, but the people affected have largely suffered in silence. The residents of Domboshava are the first to hold demonstrations in the hopes of stopping a Chinese mining project.

At their most recent demonstration on May 6, some held signs saying “Leave our Domboshava alone. Go back to your Beijing.”

China Aihua Jianye maintains the $5 million mining project would generate 500 jobs, but locals are skeptical. They also say the fallout from the project would damage tourism to the region.

Luke Tamborinyoka, a resident of Domboshava and a senior member of the opposition political party Movement for Democratic Change, told The Epoch Times that investment in the area by the Chinese company will not benefit the local people—similar to the situation in many parts of the country.

News emerged in April that China Aihua Jianye had sought to evict about 20,000 people in Domboshava after it was granted mining rights.

“If mining were supposed to benefit the country, why would over 20,000 people be displaced to pave way for foreign investors who will take the minerals and the profits outside the country?” said Tapuwa O’bren Nhachi, a research coordinator with the Centre for Natural Resource Governance.

Nhachi said his organization, an investigative NGO that stands up for communities that are being impacted by destructive mining operations, wants to know how the Chinese got access to mine at Zimbiru Mountain in the Domboshava area.

“Who gave them the licence to mine and in exchange for what?” he said.

Nhachi said the Domboshava issue is similar to the Marange debacle in Manicaland where people were forced to relocate and make way for Chinese company Anjin Investment and other companies to conduct diamond mining operations. But in 2016, former Zimbabwe President Robert Mugabe forced them out due to accusations of rampant looting of diamonds.

Now, however, Anjin Investments is returning to the Marange area, and villagers are planning to hold demonstrations against the company, following the example of those in Domboshava.

“Our constitution is clear on fundamental rights that the citizens have, and these include environmental and cultural rights. Taking this into account, the community has the right to say ‘no’ to destructive and unsustainable development and that right should be respected by those who are in authority,” Nhachi said

Last year, Zimbabwean legislator Prosper Mutseyami told The Epoch Times that Chinese companies enjoy protection from the government, as China is currently the biggest investor in the country.

Mutseyami, a chief whip for Movement for Democratic Change, alleged that Zimbabwe is afraid to upset China, which is among the few countries that currently support the Zimbabwean government.

The Zimbabwe Environmental Law Association (ZELA), an NGO that promotes the rights of marginalized and vulnerable communities in natural resource-rich areas, has been working with affected communities in Shurugwi, Zvishavane, Marange, Mutoko, and Gwanda, among others.

A report by ZELA released in March reveals that the organization has trained and equipped community monitors and paralegals to regularly document violations and complaints on environmental, economic, social, and cultural rights (EESCRs) in Zimbabwe.

“Some of the companies that are foremost in violation of EESCRs are Chinese mining companies,” the report says.

“Mountains in Chiadzwa [Marange area] are considered sacred and cultural shrines, but company officials of Chinese descent built their temple on top of one of the mountains,” says the report.

In other parts of Zimbabwe, where the graves of peoples’ ancestors are considered sacred, ZELA reported that “the Chinese companies violated the graves by exhuming the bodies and exposing them without carrying out the necessary cultural rights and at one point they left skeletons scattered all over, which is a taboo in Zimbabwe.”

Mountains in the Domboshava area are revered by local people as a heritage sites but fears abound that the quarry project could destroy the caves and rock paintings in the area, thereby having a negative impact on tourism.

However, Percy Mudzidzwa, a lead consultant for Geoglobal Environmental Solutions, a mining consultancy company handling the Domboshava project for China Aihua Jianye, said in an interview that the project would not cause damage because the company has proposed to have a fence erected around the graves.

He said the project, which should be up and running by the end of August, will benefit local people through employment creation and servicing of roads.

“We propose that there be a community trust that we will make contributions to find the different needs in the community with time,” he said.

But Nhachi said what happened in Marange has shown that forced relocations will take place as long as the settlements are a threat to the company’s profits.

“Promises of development and community-centered investments are only entry rhetoric by these companies to dupe their way into the community,” he said. “What should be respected in this case by Geoglobal Environmental Solutions and the government of Zimbabwe is the refusal by the Domboshava community for such development. No amount of money can buy the lives and livelihoods of people.”

In an effort to bring some sanity to the mining sector in Zimbabwe, ZELA recently petitioned Parliament to implore the executive to uphold the constitution by ensuring that mining sector investments are in compliance with the provisions of the country’s constitution and international obligations and standards.

“While commonly presented as a sector providing development opportunities for the national government and local communities, mining activities in Zimbabwe have repeatedly triggered a myriad of problems such as livelihood shifts, displacements from ancestral lands, and insidious social, cultural, environmental, and economic changes,” reads part of the petition.