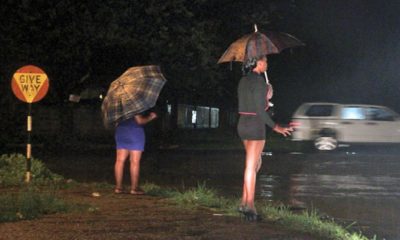 HARARE, Zimbabwe — Forced to stay home for weeks without any source of income, Zimbabwe’s sex workers, like many other informal traders, are beginning to defy the country’s lockdown and return to the streets.

Risking arrest and the coronavirus, many are working afternoons because some clients are at home due to a general night curfew.

Such scenes would have been unthinkable when Zimbabwe first imposed its coronavirus restrictions at the end of March and streets were deserted amid often-violent enforcement by security forces.

Sex workers “had to put all tools down,” when the shutdown started, said Pow Wow, a local organization representing sex workers that has been distributing food, soap and sanitizer to its members struggling to make ends meet.

The government has relaxed the restrictions to allow formal businesses to open, but it hasn’t helped the majority of Zimbabweans who survive on selling goods on the streets, which is still prohibited.

In a bid to survive, many street traders are ignoring the regulations and hawking their wares on the roadsides again.

Sex workers say they cannot miss the opportunity, although many have changed their timetables.

“It makes sense to work in the afternoons only these days. Evenings don’t pay that much anymore. The traffic is higher in the afternoons,” said one sex worker, on the lookout for both clients and police. She did not give her name to protect her identity.

Others still prefer working at night, saying that although clients are fewer after dark, so are police. The cops are also more lenient at night, said one.

Zimbabwe’s Constitutional Court in 2015 barred police from arresting women out on the streets on prostitution charges, but they can be picked up for violating lockdown rules against being out, said police spokesman Paul Nyathi.

Nyathi said “a good number” of sex workers are among the close to 60,000 people arrested since April for violating the lockdown.

Like many informal traders, sex workers bribe police at numerous roadblocks to get into downtown Harare. According to a recent report by the Zimbabwe Human Rights Forum, street traders are paying up to $5 a day to police to be allowed to operate without being arrested.

“The majority of the people, including sex workers, are now agitated and hungry and this is what is pushing them to leave their houses,” said Itai Rusike, executive director of the Harare-based Community Working Group on Health. He attributed the increased defiance of the lockdown on “laxity in enforcement, fatigue and hunger.”