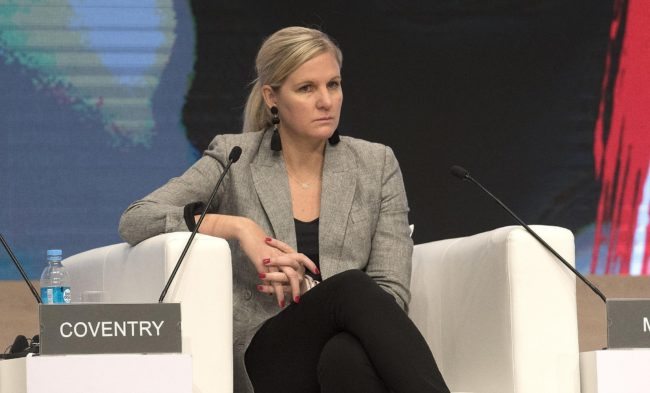 According to Kirsty Coventry, chair of the IOC Athletes’ Commission and Zimbabwe’s sports minister, the Games participants are opposed to protests and actions at the upcoming Tokyo Olympics. The IOC has heeded their pleas.

According to the IOC, athletes will be banned from getting down on one knee in support of the BLM movement or protesting against violations of human rights and freedoms at the Tokyo and Beijing Olympics. The International Olympic Committee (IOC) announced the announcement after 2/3 of competitors surveyed favoured retaining the ban. The decision was spearheaded by Kirsty Coventry, a former swimmer who represented Zimbabwe on the international stage and was a two-time Games champion.

According to the Olympic Charter, demonstrations or protests of a political, religious or racial nature are not allowed in the zones and venues of the Games. However, athletes have the opportunity to publicly express their views during press conferences, interviews or in the media.

Last year there were widespread protests against racism around the world, prompting a wave of criticism of the above-mentioned Olympic Charter rule. The IOC was pressed to relax the strict prohibitions, but the organisation first decided to survey the athletes themselves. The results of the survey, which involved 3,547 athletes from 185 countries, were as follows. The results were as follows: 70% considered Olympic stadiums and ceremonies to be inappropriate places to protest, while 67% fully supported the continuation of the existing ban.

Kirsty Coventry has not revealed what punishment will be meted out to those who follow the example of Tommy Smith and John Carlos, the US sprinters who raised clenched fists in support of the struggle for the rights of African Americans at the 1968 Olympics. However, the former athlete has said that lawyers are thinking through sanctions that would be proportionate to the protest.

Participants of the Games can still express their views in communication with journalists, but the IOC Athletes’ Commission emphasizes that freedom of speech at a sporting event may be limited.

According to Coventry, there will be more opportunities for athletes to express themselves during the Olympics. Among these, the Zimbabwean sports minister cited the integration of a moment of solidarity against discrimination into the Games’ opening ceremony. 48% of athletes surveyed by the IOC thought that this decision was extremely important and necessary.

At the same time, many Olympic and Paralympic Committees in individual countries have already stated that they will not penalise athletes in any way if they get down on one knee in support of the BLM movement, raise their fists in the air or otherwise demonstrate to express their views.

At the Tokyo Summer Olympics, athletes from Zimbabwe will compete against the world’s strongest athletes in three disciplines. They are athletics, rowing and golf. This will be Zimbabwe’s tenth consecutive appearance as an independent state.

The games in the Japanese capital will take place from 23 July to 8 August 2021. They have been postponed by a year because of the coronavirus pandemic. Foreign fans will not be allowed into the stands to prevent the spread of the disease in the country.

You can bet on which country will win the medal standings at the upcoming Olympics at one of the reliable bookmakers on Meta.reviews.