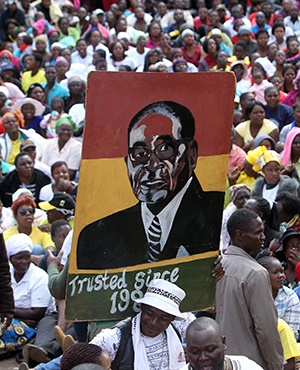 The coup d’état in Zimbabwe – call it bloodless, benevolent, calm or whatever – holds so many lessons for South Africa.

Thousands of Mugabe supporters carry his portrait while gathering at the party headquarters in Harare. (Tsvangirayi Mukwazhi, AP)

In fact, the whole continent of Africa has a lot to teach us, mostly on how not to govern.

The transition from apartheid to a constitutional democracy gave an indication that we had learned a great deal from Africa’s painful post-colonial failures. The achievement of freedom in 1994 was accompanied by many institutional safeguards to prevent abuse of power. Our own history of state-sponsored human rights violations under colonialism and apartheid provided an incentive to close gaps for potential violations in future.

Many of the safeguards were borrowed from best practices around the world and adapted to suit our modern circumstances as a diverse African country. There is no doubt, however, that our constitutional democratic system is a combination of predominantly Western and uniquely South African features.

Whether Jacob Zuma likes it or not, there are no traces of Russia in our Constitution. We are closer to New York, London and Berlin than we are to Moscow. We have had what we might call the “cruel but distinct advantage” of seeing what worked better and what didn’t in other jurisdictions.

The advantage was cruel because we learned from others while freedom fighters were being killed, tortured and jailed. But this is precisely one of the reasons we cannot afford to squander the lessons that Zimbabwe is offering to us now – on how not to run a country.

It’s important that while attempts to help Zimbabwe fix its problems are being undertaken, we must take note and learn. To think that it will never happen in South Africa, and thus become complacent, is a moral hazard.

The lessons are particularly important for some South Africans who, while drunk with opulence, have the tendency to lie to the poor by making populist undertakings that, if implemented, can only lead us to Harare. Their admiration for Robert Mugabe’s political and economic models is astonishing – coming as it does from people who squirm each time the rand weakens by a few cents to the dollar.

With no sense of irony whatsoever, South Africa’s post-1994 revolutionaries think of Mugabe, the man who destroyed the Zimbabwean economy and the country’s relative monetary sovereignty, as a hero.

So, what should we learn from Zimbabwe?

First, state capture is a threat to the stability of any country. The battle in Zimbabwe is between elites who want to control the direction of the country without the consent of the people.

Grace Mugabe and her grouping had begun to implement a dynastic rule behind the scenes, appropriating for themselves the executive authority of the country. The army, which had long captured the political space through Zanu-PF war veterans, could not take it. What we are witnessing is really the battle for state capture.

In South Africa, we regularly get lectures from Zuma about democracy. We have to be vigilant about the abuse of the concept of democracy by people who seek to achieve the exact opposite.

Second, the hegemony of one set of governing elites or political party might look like Utopia on the world map of Stalinists, but it is totally unsuitable in a democratic system. Zanu-PF’s tentacles are dangerously spread in the whole of society of Zimbabwe, thus making genuine multi-party democracy impossible, notwithstanding its existence on paper.

Third, voters must never be too comfortable with one party for too long. Too much comfort is dangerous. Democracy works best if not a single political party is assured of victory at the next polls. Under such circumstances, all state institutions, including the army, have no vested interest in the outcome of an election, save for ensuring that the outcomes are respected, regardless of the name of the victor.

Fourth, the violation of each right should be treated as a violation of all rights. The destruction of democracy typically happens piecemeal. Failure to protest on what might look like a negligible violation is akin to approval for more future violations.

Zimbabweans tolerated the curtailment of their rights for far too long. By the time they woke up, it was too late. The factional state capturers have tasted the sweetness of unchallenged power – and they would like to keep it that way. This makes the battle for genuine democratic reforms difficult.

Fifth, continuously build a strong civil society. Sometimes the cumulative effect of what might appear to be small things can create a democratic culture in society. As the historian Niall Ferguson puts it: “For true citizenship is not just about voting, earning or staying on the right side of the law. It is about participating in the ‘troop’ – the wider group beyond our families – which is precisely where we learn how to develop and enforce rules of conduct: in short, to govern ourselves.”

People who enjoy governing themselves would make it difficult for any dictator to take over their lives. There’s something spiritual about freedom.

Mugabe’s initial involvement in politics was noble, but he erased all of that as he transformed himself into a political monster. In the process, he manufactured what we are witnessing today.

The sooner we appreciate that Africa, including our own country, is home to many liberation heroes-turned monsters the better for our political sanity.

– Mkhabela is a fellow at the Centre for the Study of Governance Innovation (GovInn) at the University of Pretoria.

Disclaimer: News24 encourages freedom of speech and the expression of diverse views. The views of columnists published on News24 are therefore their own and do not necessarily represent the views of News24.