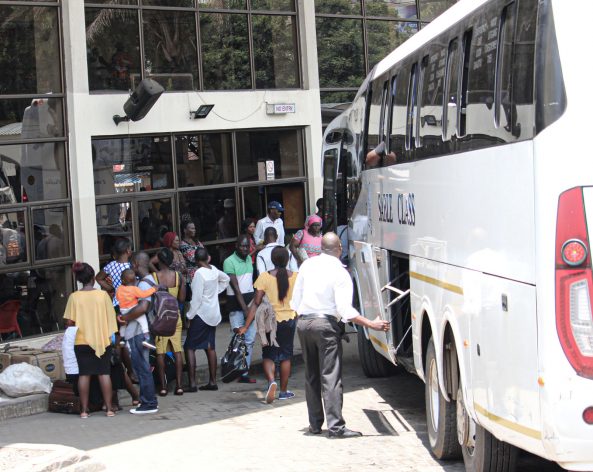 A large number of children are regularly transported across Zimbabwe’s borders by women who are not their mothers. Courtesy: Michelle Chifamba

While there are a large number of instances of child smuggling and trafficking across Zimbabwe’s porous borders, these cases still remain unknown and unreported because of the nature of the crime.

Elton Ndumiso*, a bus-conductor who works the route from Zimbabwe’s capital, Harare, to neighbouring South Africa, sees it all the time: Zimbabwean women travelling with three or four children, who are clearly not their own kids, and taking them across the border.

It’s a crime that most bus drivers or conductors either turn a blind eye to, or become accomplices in by assisting the women.

Ndumiso told IPS that in many cases some bus drivers and conductors go as far as “talking to” or even bribing border officials, to allow them to let the children and women enter neighbouring countries without regular migration documents.

The practice is not a new one.

“A number of children have been transported by female smugglers to cross the border. Some of the women will be in possession of signed affidavits that claim they are the legal guardians of the children. It is difficult to prove what the intensions of the smugglers would be once they have crossed the border to South Africa,” Ndumiso told IPS.

Ndumiso may not know what risks await the children after they cross the border, but he’s seen cases of children being at risk during the journey as well. He remembered a recent case of a woman who was smuggling four children across the border into South Africa and had lost one of the kids when the bus stopped for a break.

“The young child was eight years old and disappeared in the small mining town of Mvuma in Midlands Province were the bus had stopped for recess. We searched for the child but could not find her. We had to leave the woman at the nearest police and a police report was made,” Ndumiso told IPS, explaining that the woman had claimed she was transporting the children to join their parents in South Africa.

IOM told IPS that despite there being a large number of instances of child smuggling and trafficking across Zimbabwe’s porous borders, these cases still remain unknown and unreported because of the nature of the crime.

IOM-Zimbabwe head of programmes Ana Medeiros told IPS that this was largely due to the fact that in many cases victims were afraid to speak out and tell their stories.

Head of the Zimbabwe Gender Commission, an independent rights body in this southern African nation, Virginia Muwanigwa, told IPS that very few cases of child trafficking are addressed each year in Zimbabwe as they are difficult to trace.

“In most cases, the traffickers who pay the smugglers to transport the children along the borders are close family members who may have … affidavits and consent from parents or guardians of the children for transportation and may also pay a bribe to border officials,” she explained.

According to IOM, smuggling is mostly prevalent on the borders of South Africa and Botswana because documents can be forged and people bribed to allow entry without proper documents.

Medeiros, however, was careful to point out that, “smugglers are not traffickers because in most cases they are paid for their service to facilitate the process of smuggling. However, in some cases they may be linked to the traffickers.” The easily porous borders means that the trafficking of children is also prevalent.

“Child trafficking cases are difficult to trace because minors are not responsible for their actions and there is a thin line between smuggling and trafficking. Trafficking is not always clear as many trafficked people may be recorded as migrants in the country of destination,” Medeiros told IPS.

And Medeiros told IPS that when it comes to cases of child trafficking, usually trusted people like church and family members recruited children with promised work or education outside the country where they either ended up in domestic servitude or as sex salves.

“As a result of the nature of the crime, the component of confidentiality when investigating the issues of child trafficking and lack of knowledge on the crime of human trafficking, many families and children fall victim to trafficking, particularly with people who are close to them who are paid by traffickers to recruit young children,” Medeiros told IPS.

IOM is currently supporting Zimbabwe with capacity building and training programmes to educate people on the crime of human trafficking.

“IOM has supported the government through the Ministry of Public Service Labour and Social Welfare and Civil Society Organisations in providing information through promotional materials such as flyers, banners, T-shirts, road-shows throughout the country’s provinces to educate people on trafficking,” Medeiros told IPS.

“At the shelters victims receive counselling and share their stories on how they ended up being smuggled or trafficked,” Medeiros added.

The Global Sustainability Network ( GSN ), which actively supports the U.N. Sustainable Development Goal 8 of decent work and economic growth, has focused much of its work on eliminating modern slavery. It, however, acknowledges that globally the legal system has failed to put an end to trafficking and that new laws are needed to protect citizens from this.

“The legal system can be the driver for change — so let’s use the instruments already in place — the law firms that are willing to drive change. Initiate any new laws/programmes not as a marketing add-on but a business norm and a business imperative. We need rule of law and safety of citizens in place — civilised society cannot exist without the rule of law in place,” GSN states on its website.

Muwanigwa too wants to see stronger laws in place to protect Zimbabwe’s children.

“There is need for legislation reform as very few cases of child-smuggling or trafficking in persons are investigated. Resource constraints are also the major drawback when it comes to issues of human trafficking in Zimbabwe,” Muwanigwa told IPS.

This is part of a series of features from across the globe on human trafficking. IPS coverage is supported by the Airways Aviation Group.

The Global Sustainability Network ( GSN ) is pursuing the United Nations Sustainable Development Goal number 8 with a special emphasis on Goal 8.7 which ‘takes immediate and effective measures to eradicate forced labour, end modern slavery and human trafficking and secure the prohibition and elimination of the worst forms of child labour, including recruitment and use of child soldiers, and by 2025 end child labour in all its forms’.

The origins of the GSN come from the endeavours of the Joint Declaration of Religious Leaders signed on 2 December 2014. Religious leaders of various faiths, gathered to work together “to defend the dignity and freedom of the human being against the extreme forms of the globalisation of indifference, such us exploitation, forced labour, prostitution, human trafficking” and so forth.