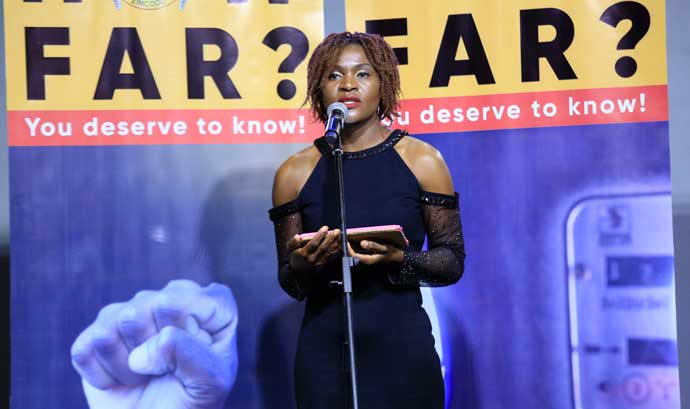 Zimbabweans must do more to ensure that the government is accountable and officials shun corruption, a leading a socio-economic justice coalition has said.

The Zimbabwe Coalition on Debt and Development (Zimcodd) said it was playing its part by launching a second phase of its popular campaign code named #HowFar 2.0.

Last year launched the HowFar campaign to raise public awareness about lack of transparency and accountability by the government on matters of public finance management.

“While we recorded key successes, the path we have traversed so far wasn’t a walk in the park,” Zhou said at the launch of the #HowFar 2.0 campaign in Harare last Thursday.

“The campaign was also received with hostility and suspicion from some overzealous members of the society, who thought and still think that the campaign is an attack.

“These sentiments were expressed through the defacing and destruction of the #HowFar billboards, particularly those that were focusing on corruption and misuse of public funds.

“A billboard, which inquired on the progress made on the prosecution of the Zinara, Drax and NSSA scandals was defaced; a billboard in Masvingo was uprooted and the Hwange Colliery Company also deliberately removed a billboard that requested an update on the Zambezi Water Project.

“These acts were a direct attack on the quest for a culture of public accountability that the campaign seeks to entrench in Zimbabwe.

“This brought to light the extent of intolerance and resistance to citizen’s quest for accountability in Zimbabwe.”

Zhou said the campaign was part of efforts by citizens to build their country.

“We are the citizens trying to build our country; building our country through ensuring that those in public offices are answerable to their decisions and actions,” she said.

“There is no country that can be built without public accountability.

“Zimbabwe cannot be built when corruption, theft and abuse of resources continue to be rampant both at national and local government levels.

“When we speak about corruption and unfulfilled promises, let everyone know that it is us the citizens who must build our nation.

“Those who cannot tolerate or are unsettled by the accountability questions we will continue to ask, are indeed like those builders who throw away cornerstones.”

Zimcodd said despite the government’s response to the campaign, “the culture of genuine public accountability is still in peace-meal format.”