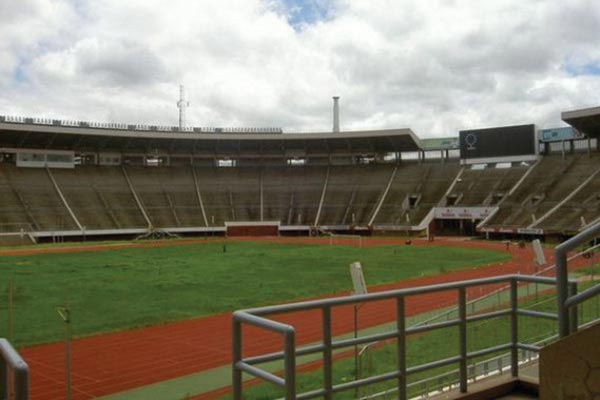 Zimbabwe is facing a stadia crisis after the Confederation of African Football (Caf) condemned the National Sports Stadium and others, warning that national teams and clubs playing in continental competitions may be forced to host their home matches in neighbouring countries if the situation is not addressed as soon as possible.

The Caf inspection team was frank in its assessment of Zimbabwean stadia with only Barbourfields (BF) in Bulawayo provisionally approved and is set to host the Caf Champions League match between FC Platinum and Etoile du Sahel of Tunisia on Saturday.

The National Sports Stadium (NSS), Mandava and Rufaro were all condemned for failure to meet minimum requirements to host international matches.

Of major concern to the Caf inspecting team was the state of the playing surface at the National Sports Stadium which they said was poor. The dressing rooms were also condemned as substandard.

Another major concern raised was the non-existence of fully-equipped medical room and a media tribune.

According to the inspecting committee, the Press conference room does not meet modern standards. They also raised a red flag over the entrance gates which they said were in poor state and recommended that football authorities use automated gates.

Zifa were also advised to use modern camera stands.

Zifa spokesperson Xolisani Gwesela said they were warned the issue of stadia was so critical that should they fail to make some refurbishments, they risked playing home games outside the country.

While Caf was condemning their main home ground, the Warriors were being hosted in a state-of-the-art Heroes Stadium in Lusaka, Zambia, a few days after the Botswana match.

Several stadia have been condemned as unfit to host Premier Soccer League matches, only for politicians to negotiate for their use.

In the past few years, there have been stadia crisis at the start of the season with some failing to meet required standards.

Since the National Sports Stadium was built ahead of the 1995 All-Africa Games, Zimbabwe has not seen any investment in infrastructure development in that regard.