Felex Share Senior Reporter
GOVERNMENT will this week dispatch teams to audit usage of Command Agriculture inputs countrywide, as it emerged yesterday that the programme’s financier, Sakunda Holdings, paid duty for fuel used in the project.

Invoices obtained by The Herald from the National Oil Infrastructure Company of Zimbabwe (NOIC) showed that Sakunda Holdings paid duty for the 15 million litres of diesel and petrol used under Command Agriculture between September 2016 and last Friday.

This is contrary to assertions by Higher and Tertiary Education, Science and Technology Development Minister Professor Jonathan Moyo that fuel for the special maize import substitution programme was duty-free.

In an interview with The Standard, Prof Moyo claimed that Command Agriculture had no monitoring and evaluation mechanisms.

He did not proffer evidence to substantiate his claims.

Deputy Chief Secretary to the President and Cabinet Mr Justin Mupamhanga yesterday said he would provide details on the audit teams today.

A Government official privy to the developments said security details would be part of the audit teams.

“This week we have 10 teams of four people going to all the eight provinces where farmers got inputs under Command Agriculture to assess the usage of those inputs,” said the official.

“The teams will include one official each from the ministries of Agriculture, Mechanisation and Irrigation Development; Finance and Economic Development, Sakunda Holdings and a security detail.

“Mashonaland Central and Mashonaland West provinces will each have two teams of four people. Apart from their audits, they will also be gathering vital information for the new season. The teams will be assisted by Arex officers who recently received 200 motorbikes for that purpose from Sakunda Holdings.”

See copies of invoices  below 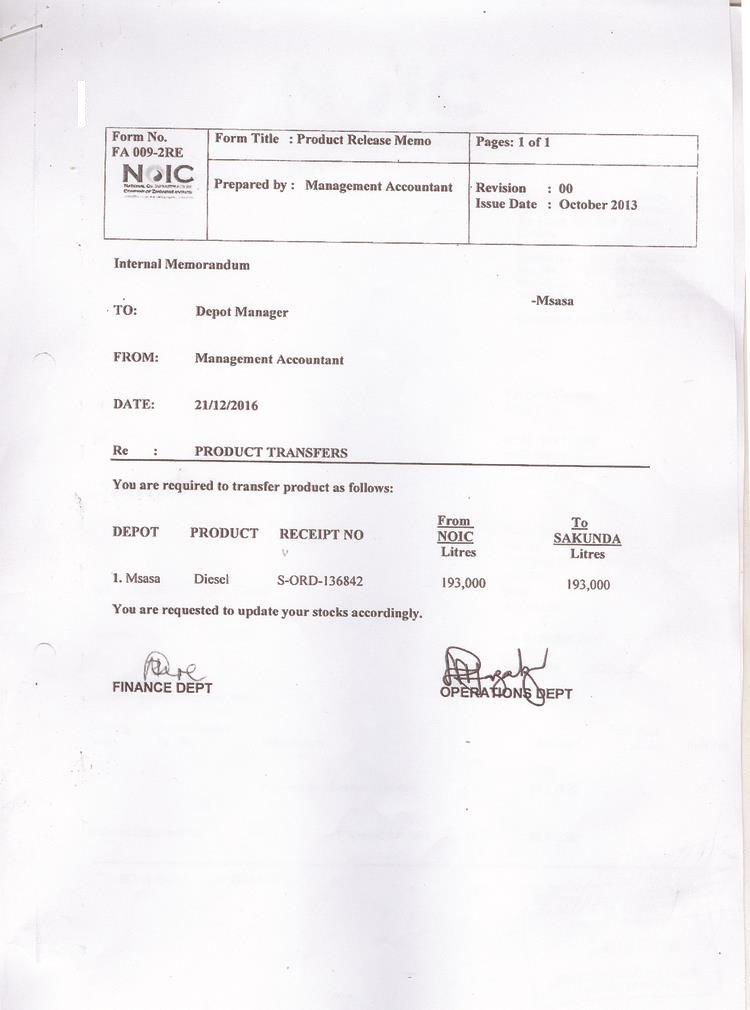 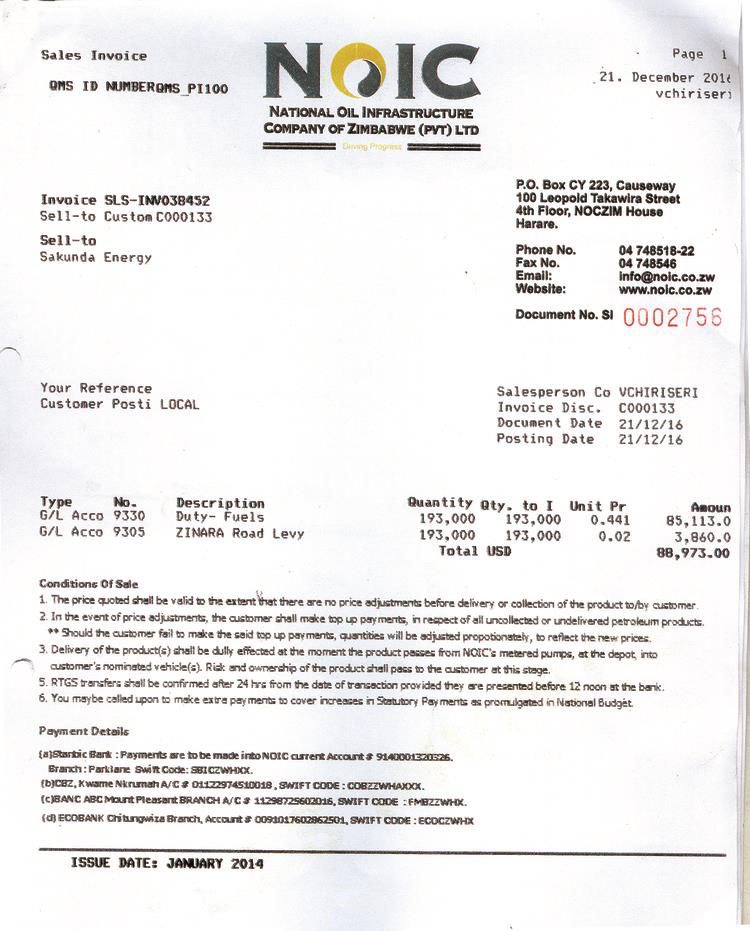 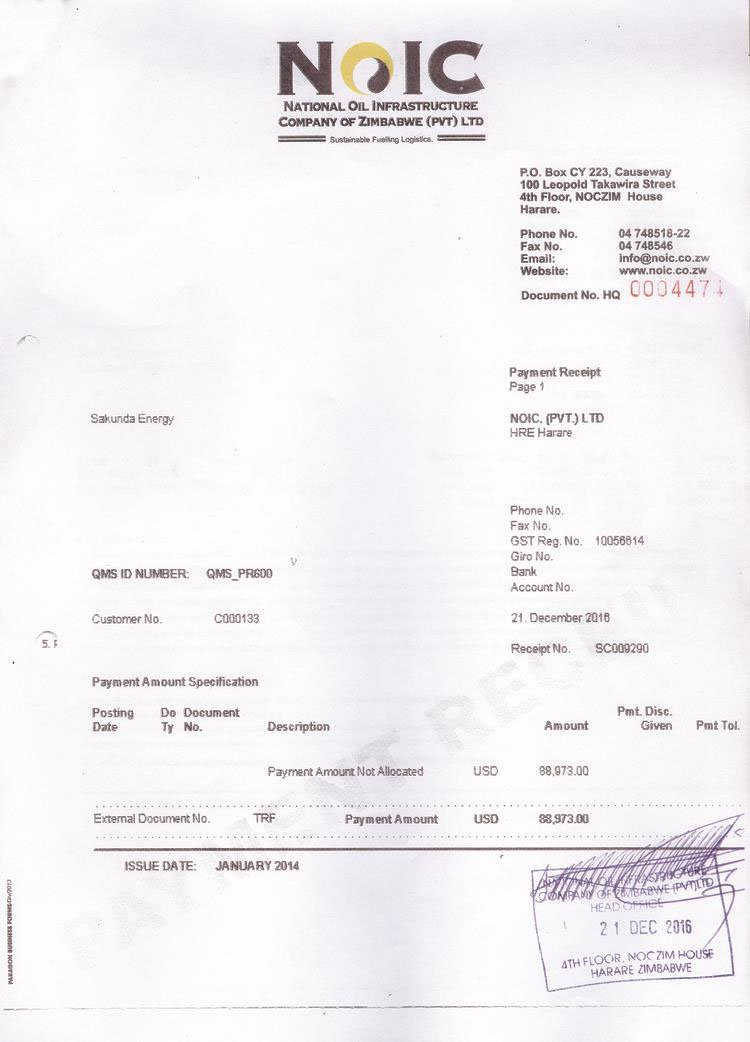 Contrary to reports that fuel imported and used in Command Agriculture did not pay duty, documents above show transfer of fuel from national Oil Infrastructure Company of Zimbabwe (NOIC) to Sakunda Holdings, an invoice of duty charged and proof of payment

The official said the teams would also ensure that farmers were delivering their maize to the Grain Marketing Board.

Command Agriculture is the brainchild of First Lady Dr Grace Mugabe and is being supervised by Vice President Emmerson Mnangagwa, who chairs the Cabinet Committee on Food and Nutrition.

Together with the Presidential Inputs Support Scheme, Command Agriculture has yielded positive results this year as the country gears for a bumper harvest.

Prof Moyo, who sits in Cabinet, has been lampooning the programme and VP Mnangagwa.

He continued with his vilification yesterday in The Standard newspaper, wrongly stating that Sakunda Holdings — who poured $192 million into the programme — was getting fuel duty free.

Documents and invoices from NOIC showed that duty was paid for all the fuel used for tilling, planting and harvesting.

To date, 15 million litres have been used, of which 732 000 litres were direct deliveries (bulk fuel).

The remaining 14,2 million litres were fuel coupons issued to farmers.

Sakunda Holdings, invoices reveal, bought the coupons from Redan Coupon (Pvt) Limited at between $1,18 and $1,23 per litre.

The petroleum giant sold the coupons to Government at $1,21 per litre, a figure agreed in the contract signed by the two parties.

It also emerged that contrary to Prof Moyo’s claims that 1,4 million households benefited from the Presidential Inputs Support Scheme, only 1,1 million families benefited.

Under the initial contract, 600 000 households were expected to benefit under the Presidential Inputs Support Scheme, but the Ministry of Agriculture, Mechanisation and Irrigation Development in December last year requested Sakunda Holdings to move more inputs under Command Agriculture to the President’s scheme.

An official from the Ministry of Finance said: “To show that his (Prof Moyo) interview is driven by malice, he does not even know the actual statistics involved. He claims the fuel was duty free. He should provide proof, not just soiling the company’s name. He is free to check with NOIC if the fuel he also used as a beneficiary was duty free.”

Prof Moyo received inputs worth about $100 000 under Command Agriculture, which went to his Elephant Trust Farm in Mazowe.

Just last week, the Moyo family was requesting more diesel from officials administering the programme in Mashonaland Central for harvesting and delivering their maize to GMB.

To build on the success recorded this year, Government has already sealed another $487 million facility with Sakunda Holdings for the 2017-18 agricultural season.

The petroleum giant will this year work with CBZ, Ecobank and Barclays banks to mobilise the required funding.

Movement of inputs for Command Agriculture is expected to begin this month as all inputs supply agreements have been signed.

The Presidential Inputs Support Scheme, documents reveal, will be covered by $153 million, while the remaining $334 million will be used for Command Agriculture.