TEACHERS and nurses need not bother queuing for their salaries this month; the money won’t be there.

Zimbabweans have been spending hours in queues trying to access their savings and salaries as the economically stricken country battles serious cash shortages.

Government normally pays its 500,000 strong workforce mid-month but a senior treasury official said this week that there was no money for salaries yet.

One of the teachers’ unions immediately declared that the “battle lines have been drawn”, adding its members would not report for work beginning June 27.

But in a bid to avoid outraging the sensitive security sectors, the under-fire administration says the army and the police will get paid first, but at the end of the month.

The latest shift in pay dates was confirmed in a circular to other government departments by Finance Ministry Permanent Secretary Willard Manungo.

“You are aware that, against the background of severe revenue underperformance and related cash flow challenges, government has been honouring its monthly wage bill albeit through the continuous shift of pay dates,” writes Manungo.

“It is on the account of … cash challenges that has necessitated the honourable minister of finance and economic development, in his communication copied to yourself to propose the following pay dates (see image below) for the month of June 2016, which allow for the mobilisation of resources of the requisite resources.” 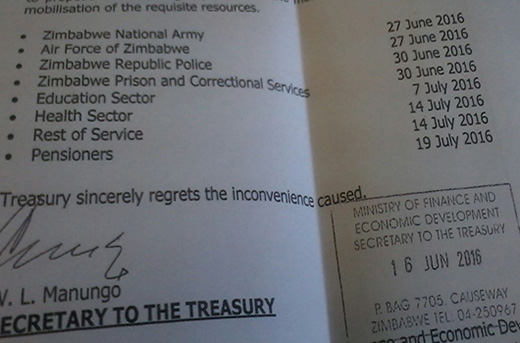 Manugo tried to soften the blow by saying; “I am pleased to advise that Treasury has successfully mobilised resources towards the full settlement of the 2015 bonus commitments.”

The bonus was due last November. Finance minister Patrick Chinamasa tried to do away with it, pleading lack of money only to be publicly rebuked by President Robert Mugabe who ordered that the gratuity must be paid.

Meanwhile, the Progressive Teachers Union of Zimbabwe (PTUZ) has described the latest wage deferral as “shocking” and vowed to fight the government.

“Cdes without saying much the battle lines have been drawn,” reads a message sent out to members on Friday.

“We will also be classified as bad debtors from many service providers. Surely, it time to fight this monster.

“We find it quite disturbing that government was not honest to divulge this painful reality in an NJNC meeting that happened 48hrs ago. It simply shows all was being done in bad faith.”