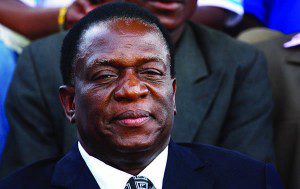 VICE-PRESIDENT Emmerson Mnangagwa yesterday slammed Zanu PF officials, who were disrespectful of the party leadership and the electorate, saying such elements should be booted out of the party, in remarks that would be seen as targeted at Higher Education minister Jonathan Moyo.

“I have told Brown (Ndlovu) that the people are your bosses,” he said.

“If you see him (Ndlovu) walking around bragging that he is the MP, then know that the demon of Legion would have possessed him.

“Those who are possessed by the demon of Legion should leave Zanu PF for those in Zanu PF respect others so that they can also be respected.”

The Vice-President is embroiled in a cold war with Moyo, who insists Mnangagwa is not President Robert Mugabe’s heir apparent.

Moyo has also attacked Mnangagwa’s flagship programme, command agriculture, which he alleges is fraught with corruption and needs to be investigated.

Mnangagwa said even Mugabe was a servant of the people, as he was chosen by the people.

“Not everyone, who calls the name of Jesus Christ worships Christ,” he said, drawing parallels with the Bible, a favourite past-time for Zanu PF officials in recent days.

“Not everyone, who claims to be Zanu PF is Zanu PF, and such elements are proponents of bhora musango. Such people would be possessed by the demon of Legion.”

Zanu PF is currently in the throes of fierce factional fights, with top party officials publicly dressing each other down over Mugabe’s possible successor.