Harare – President Robert Mugabe’s son-in-law could be sent for retraining on how “to work for a parastatal”, as struggling Air Zimbabwe embarks on a drive to restore viability, reports say. 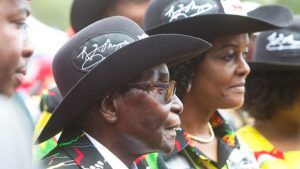 Mugabe’s son-in-law Simba Chikore is currently chief operating officer at Air Zimbabwe whose staff, including the chief executive, are now reportedly the target of a restructuring and retraining exercise.

Air Zimbabwe Board Chairperson Chipo Dyanda confirmed nearly half of Air Zimbabwe’s bloated workforce had been sacked as the company pursued an ambitious new plan to restore viability and turn Harare into a “transit to other parts of the world”.

“We are also going to embark on a retraining exercise that includes all staff members starting with the chief executive officer. We want them to understand what it means to work for a parastatal,” Dyanda told the state-run Herald.

Chikore, a trained airline pilot, was appointed to Air Zimbabwe last October in what critics said was a clear case of favouritism.

Dyanda said in addition to the retraining exercise, nearly half Air Zimbabwe’s staff had been sacked, and the other half would be subjected to an audit to check on their qualifications and ability to do the job.

All 30 of the airline’s pilots had, however, been spared the axe because they had “the required qualifications for their positions”, the Herald said.

“We have retrenched 200 employees out of 424 employees and those who were affected are going with their (severance) packages,” Dyanda said.

Air Zimbabwe is struggling underneath a debt of more than $300 million, yet the company’s finance department had 36 staffers. They will now be reduced to 17, while the number of managers would be cut from 28 to 12.

On salary distortions, Dyanda said some employees had been awarded allowances that nearly doubled their salaries.

With just four aircraft left operating in its fleet, Air Zimbabwe is a pale shadow of its former self. Unconfirmed reports say the company is now negotiating to lease planes from Malaysia and will possibly re-brand itself as Zimbabwe Airways.