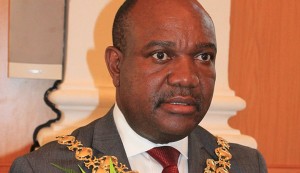 HARARE mayor, Bernard Manyenyeni has claimed that government policy discord and the country’s battered political image caused international telecommunications firm, Samsung, to pull out of a million-dollar infrastructure development deal that would have benefited the city.

Manyenyeni told NewsDay on Tuesday that several international investors were keen on upgrading the city’s infrastructure, but were reviewing their offers due to policy inconsistency by the central government.

“Harare has the opportunity, but the external appeal is diminished by the weak national brand,” he said.

“It’s a dying hope, because it was conveniently premised partly on many executive vacancies, which are fast disappearing and the mayor’s term coming to an end.

“I have tried to sell the concept to Samsung, who besides cellphones, are into infrastructure in a big way.

“The thinking included re-branding to ‘Harare Samsung City’. But it’s not moving at all.”

Manyenyeni, whose five-year term ends next year, said he had also tried to engage a French company with a similar deal.

“The idea would be to bring in a partners with significant access to long-term funds and share with them key management positions as an assurance and confidence-building pillar,” he said.

“I have also tried to get a French urban-tech solutions group to the table around the same thinking.”

“We should be looking at results not continued ownership of failed management processes,” he said.

“In short, Harare’s infrastructure opportunities now require fresh thinking, including but not limited to co-management of the city with representatives or providers of much-needed funding.

“We need to put sweeteners to the deals to increase the acceptance and confidence in the capital and country.

“Initial efforts have not yielded results, but further forays are pencilled for mid-September.”

Harare man up for US$30k fraud