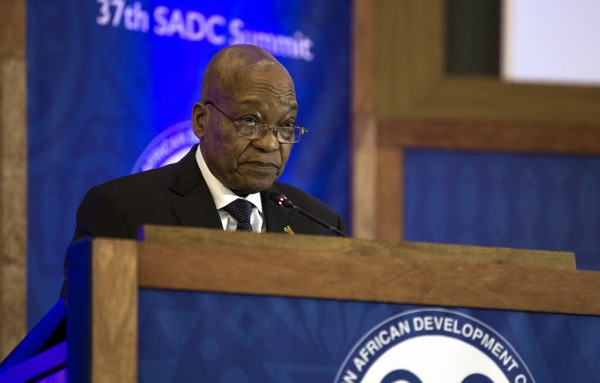 File: President of South Africa Jacob Zuma addresses Heads of State, delegations and the media at the Closing Ceremony of the 37th Southern African Development Community (SADC) Summit of Heads of State and Government. Photo: Gulshan Khan / AFP
JOHANNESBURG – The Southern African Development Community (SADC) will sit for an emergency meeting to discuss the unfolding political and security situation in Zimbabwe.This follows the tense political situation in Zimbabwe after the military seized powerearly on Wednesday targeting “criminals” around President Robert Mugabe but gave assurances on national television that the 93-year-old leader and his family were “safe and sound”.The meeting has been called by SADC chairperson and South African President Jacob Zuma and will be held at the SADC Secretariat in Gaborone, Botswana on Thursday afternoon.

The meeting will be attended by the Ministers responsible for Foreign or External Affairs from the SADC Organ Troika member states, namely; Angola, Tanzania and Zambia, plus the SADC Council Chairperson Maite Nkoana-Mashabane, who is also the South African Minister of International Relations and Cooperation.

The Zimbabwean Defence Force demanded an end to the purges in the ruling party, Zanu-PF.