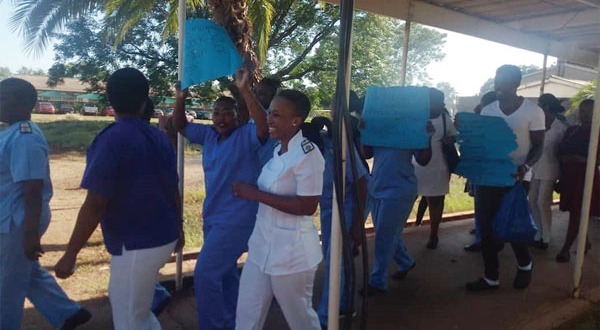 NewsDay arrived at the hospital and witnessed the nurses being bundled into a police truck before they were later charged for allegedly contravening COVID-19 national lockdown regulations.

Dozens of riot police officers were milling around to block another likely protest after the arrest of the nurses and some leaders of the Zimbabwe Nurses Association (Zina).

The lawyer representing the arrested nurses, Tinashe Chinopfukutwa from the Zimbabwe Lawyers for Human Rights said 12 of the arrested nurses were to spend the night in police cells while one had asked to pay an admission of guilt fine as she was breastfeeding.

“They had gathered for a feed back meeting from Zina. They have been charged for breaching COVID-19 regulations and indications are that they are going to be detained overnight and appear in court tomorrow (today),” he said.

“They had been called by their association for a feedback meeting and they were gathering for that meeting when the police arrived and arrested them.”

Police confirmed the arrests and that the nurses will likely appear in court today.

No one was attending to the patients and those who spoke to NewsDay said nurses from the Zimbabwe Prisons and Correctional Services had of late been called in to assist as the situation was untenable and those working were overwhelmed.

Zina said it was unfortunate that the government chose “such a brutal” way to respond to their concerns.
“If ever we are in doubt about the nature of the government’s response to our genuine plight, this is the clearest evidence we could have got,” the nurses’ association said.

Nurses downed tools two weeks ago demanding their salaries be pegged in US dollars in relation to the 2018 rate.
Government increased civil servants salaries by 50% and in addition offered them a COVID-19 allowance of US$75 each which will run for three months.

Nurses accused the government of being insincere, adding that they were yet to receive the COVID-19 allowances government announced last month and in the absence of clarity on when it would be paid, police were unleashed to deal with them.

“We have lost our earnings already through slave wages so we have nothing more to lose.”
“Secondly, government proceeded to refuse to discuss improving the reviews and instead rendered the Bipartite Negotiating Panel useless by unilaterally declaring that it was not willing to negotiate for three months,” the nurses said.

They argued that they were now being victimised and arrested for utilising the only option available. Public hospitals continue to buckle under the strain caused by the striking nurses with most reporting reduced service delivery.

The situation at Sally Mugabe Hospital and Parirenyatwa Group of Hospitals in Harare confirmed that, with officials saying there was need for urgent action to address the crisis.

“Service delivery has been affected by the striking nurses. Forty-five percent of our nurses are reporting for duty,” Parirenyatwa Group of Hospitals spokesperson Lenos Dhire said.

“As a mitigatory measure, the hospital is receiving newly recruited nurses to boost the available staff. We also would like to thank the Zimbabwe Prisons and Correctional Services for seconding their nurses to us,” Dhire said.
Sally Mugabe Central Hospital clinical director Christopher Pasi said the institution remained constrained in all departments.

“Senior nurses and nurses’ managers continue to cover the gaps created with some difficulties,” he said.

The clinical director also said the hospital continued to offer only lifesaving surgery.

In Bulawayo, nurses from the United Bulawayo Hospitals, Ingutsheni Mental Health Hospital and Mpilo Central Hospital staged a joint demonstration at Mpilo in solidarity with their colleagues at Parirenyatwa Hospital in Harare who were served with eviction notices.

Nurses at Parirenyatwa Hospital demonstrated last month over poor working conditions and government threatened to evict them from their hospital accommodation, sparking yet another protest.

The toyi-toying nurses held placards, chanted slogans, saying they had been reduced to paupers by the government.

Zina Bulawayo provincial chairperson, Nicholas Chidora, said: “The demo is in solidarity with what happened to our colleagues at Parirenyatwa Hospital. Some of the nurses were evicted for demanding a living wage and due to that they were asked to move out of the hospital institution, which is unfair treatment for us nurses.

“There was industrial action done by junior doctors which lasted about five months, but never did we hear that anyone was being chased from residence. It is a system where we try to demand then they act severely, I don’t know if they want us to be kept at slavery.”

Zimbabwe Congress of Trade Unions secretary-general Japhet Moyo said the arrest of the nurses’ leaders was “disgusting” and showed government’s insincerity in dealing with the workers’ problems.