18 months down the line after November 2017: Are we headed for another coup?

Source: 18 months down the line after November 2017: Are we headed for another coup? | zimbabwebriefing 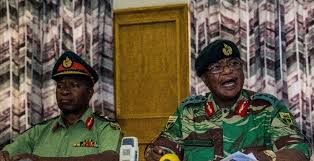 The November 2017 military coup which forced tyrant Robert Mugabe from power is still haunting Zimbabwe almost 18 months down the line. The remnants of the coup and its footprints will not disappear sooner than we expected. After topping Mugabe, Mnangagwa had an enormous task facing him trying to please his erstwhile conspirators by appointing them into the cabinet. He also attempted to cure the coup and legitimise his power through the elections. With almost 18 months after the coup, Zimbabwe has been faced with political and economic instability and the country is literally seating on a knife edge. It seems the cart is slowly wheeling off towards the cliff, thus signalling a not so good-looking future. While there have been arguments that the coup managed to address ZANU PF internal political contradictions at the time, the passage of time has disproved that thesis. Already, the ugly head of factionalism is rearing its head and the statements of the ZANU PF Youth and Women’s league are the tell-tale signs. Already, the ground is becoming fertile for another ruction and begs again if this would not be from the barracks. But the real question would be from which section of the Barrack?

Mnangagwa has missed opportunities to “cure the coup”, particularly the failure to create stable transitional mechanisms.  Mnangagwa and his co-conspirators unwittingly attempted to “cure” the coup through a manipulated “election” and this strategy has backfired and the sooner they come to terms with reality the better. Unbeknown to Mnangagwa was that the ball was in his court and he had many options to redeem himself as a unifying leader. However, his lack of foresight has exposed him as a greedy person with no strategy of moving Zimbabwe forward. One of the simplest and many options available to him at the time was calling for a genuine national dialogue of all stakeholders, not for the purposes of power sharing but rather to chat the way forward for Zimbabwe towards political and economic reforms to address the 37-year rot created by Mugabe. This kind of dialogue would have come out with clear timelines on fundamental reforms at the same time as one of the main steps in curing the coup. It would had also helped to cool down the political temperatures and depolarise our politics. However, that did not happen, as Mnangagwa became consumed and intoxicated by power, allegedly building his power around a partisan and parochial tribal agenda.  Mnangagwa has been busy focussing on consolidating his power at the expense of building a nation, forgetting Lord Acton’s warning: “Power corrupts, and absolute power corrupts absolutely”.

A regime in fear

The unfortunate and terror events of 1st of August 2018 and 14th-16th of January 2019 exposed the true colours of the Mnangagwa administration. It became apparent that the military is the underwriter and as such, when their power was threatened, they resorted to their real character: violence; murder and impunity. Their actions since November 2017 typifies of a lot that is living in fear, the fear not from the opposition but amongst themselves and particularly the men in in uniform.  The fact that they are constantly reshuffling the command within the security forces is testament to the heightening levels of insecurity. More so, the alleged reports indicating that the government gave soldiers RTGS$400 cushioning allowances versus RTGS$97 allocated to the rest of civil servants indicates a divide and rule strategy that seeks to pacify the army. The reasoning is all apparent to everyone: buying loyalty of the gun as a hungry soldier cannot be trusted. But the question is whether the strategy is sustainable in the long run.

The Achilles’ heel of coups

The coup plotters justified their action of overthrowing President Mugabe’s government in November 2017 being necessitated by the need to address the economic and political crisis facing the country then. However, fast forward to Mid-2019, the situation has moved to another new level as workers’ and ordinary citizens’ earnings, pensions and savings have been eroded and withered by inflation and currency devaluation. The worsening economic conditions, will most likely lead us to squabbling within the cockpit as opportunities for arbitrage decline, thus creating ripe conditions for another coup. McBride and Coulier in their 2004 paper “Crises, Coups, and Entry-deterring Reforms in Sub-Saharan Africa’’, in their analysis of coups in Africa  advance  reasons that generally lead to military intervention: personal greed; hope to extract once they gain power or directly control the state. This fits well in our case, as military chiefs have now become an economic class with its own distinct interests. A reading of Jabusile Shumba’s book “Zimbabwe’s Predatory State: Party, Military, Business” and  Richard Saunders and Tinashe Nyamunda’s book “Facets of Power: Politics, Profits and People in the Making of Zimbabwe’s Blood Diamonds” give a some glimpses and insights on how this military business class has become embedded in the economy. Therefore, it is not without doubt that the coup was a ‘military class project’ with a personal accumulation thrust.  The soldiers are now openly and actively involved in the control of the country’s mines, and other strategic points of economic interest.  The military assisted transition in Zimbabwe seems to have failed to bring any meaningful change in people’s livelihoods and this is not unique, and Decaldo argues in his 1986, ‘African Studies and Military coups in Africa’ that, “the military has not been able to generate economic development”. Military assisted transitions always come on the backdrop of well-meaning rhetoric but always fall short on action. It is fast becoming clear for everyone that apart from personal accumulation and self-enrichment, the current administration is as clueless in so far as economic development is concerned. For instance, the sucking in of the Minister of State Security in the Gaika Mine in Kwekwe despite a standing court order barring the mine invaders point to a bleak economic future.

The recent ambush and guerilla style re-introduction of the Zimbabwe Dollar and banning of the multi-currency regime is alleged to have been done as a strategy to pacify the men and women in uniform who had started to demand being paid in American dollars to cushion them against dollarisation. The drastic measures on currency reforms have been described by the Zimbabwe Coalition on Debt Development (ZIMCODD) as policy inconsistencies and premature reaction on the part of the government. In their statement, ZIMCODD said instead there was a need for addressing the root cause of the current currency crisis which is, “rampant corruption, mismanagement of public finances and impunity being enjoyed by those that are fuelling the crisis through arbitrage and resource bleeding.’’  Dealing with corruption and arbitrage means taking the feeding trough away from the wannabe military capitalists and creating ructions in the cockpit; yet, not doing so, means ripening the polity for revolt. Hence, I argue that without proper reforms and a different way of doing things Zimbabwe is destined for another military coup, but this time not from the top brass but the junior ranks. There is a need for inclusivity and genuine dialogue of all stakeholders, with the genesis of all being to address the political reform agenda to boost confidence in the economy. Political reforms are essentially the roadmap to curing the coup and any short cut will have disastrous consequences. There is a dark cloud of uncertainty and fear not only amongst Zimbabweans but largely amongst those who plotted the coup, no one really knows what tomorrow is in store for them. The economic meltdown is in itself a ticking time bomb that when it explodes the whole country will be burnt. Historically, coups in their very nature do not just end without another one occurring if their initial fundamental causes are not addressed. The economy remains the Achilles’ heel, and it will just take one daring junior officer and the rest can be history.

It is clear that the current trajectory by the Mnangagwa administration in dealing with the political and economic crisis facing the country will most likely lead us to another ‘military assisted transition’. The conditions that led to the November 2017 coup seem to be multiplying exponentially as each day passes and this is creating a ticking time bomb.  If things are left unresolved one may not rule out another coup happening as history has shown us that if coups are not cured, they are bound to happen again. There is a need to cure the coup by embarking on drastic and genuine political and economic reforms that will enable the economy to be on its feet again.

Blessing Vava is the Regional Coordinator of the Crisis in Zimbabwe Coalition. He writes here in his personal capacity.