Source: 18 November 2017 – the day of Zimbabwe’s delusional politics! – The Zimbabwean

I have just been reading some testimonies from some of the people who partook in the 18 November 2017 mass protests against Robert Gabriel Mugabe’s 37 year long tyranny – and the tremendous hopes that they had for a dawn of a bright new democratic era. 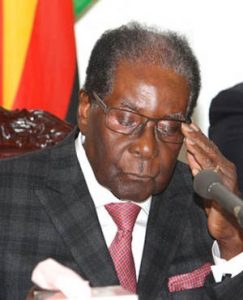 As much as I understand the immense misery and suffering that Mugabe had caused us as a nation, I still have questions that even today still beg answers, as to why so many people had so much hope for a bright future, when it was common knowledge that they were merely supporting the climax of ZANU PF infighting – that had absolutely nothing to do with the ordinary people?Yes, we indeed had had enough of Mugabe’s tyrannical rule, his psychotic economic policies and the atrocities metted against real or perceived opponents.Yes, no sane Zimbabwean – except those directly benefitting from his corrupt rule – could take the oppression and suffering anymore…enough was enough!Yes, we had tried every conceivable democrat means – especially, through elections – to remove Mugabe from power, and determine our own destiny.

However, all these efforts came to nought, as elections were rigged, voters – especially, in the rural areas – were bought with food, seeds, fertilizers (all acquired through tax payers’ money), the state broadcaster blatantly and blindly sided with Mugabe, and violent youth and war veterans intimidated voters.

Nonetheless, after 37 years of unabated suffering under Mugabe’s dictatorship, why in the world would anyone have expected any meaningful positive change in the midst of last November’s military intervention?

Why would any suffering Zimbabwean honestly believe that the removal of Mugabe, and his replacement by the same people who helped him oppress and subjugate the nation, would make life better for us?

Yes, the military – for the first time since independence in 1980 – allowed people to vent their disapproval for Mugabe – but, was that a sign of ‘winds of change’ blowing over the country?

The military was aiming at removing Mugabe – and the rival G40 faction within ZANU PF – and were not, by any stretch of the imagination, concerned about the welfare of the suffering people – and thus, obviously, they would finally allow people to protest against the long-time leader.

For the military to sit on their tanks and permit demonstrators to even dare march towards Mugabe’s residence – the Blue Roof – all played right into the hands of those in his party who wanted him and his wife Grace (and their G40 group) out of power.

As a result of the 37 years of continued suffering of the Zimbabwean people under the Mugabe regime – without any foreseeable hope of his exiting power – our desperation easily led to a delusional belief that suddenly, the same military that he had abused to oppress and subjugate us, had finally become our friends and democratically-inclined.

When had the military expressed displeasure with Mugabe’s rule?

When had the then expelled vice president Emmerson Dambudzo Mnangagwa ever exhibited any disapproval of Mugabe’s policies and manner of ruling the country?

Having witnessed the never-ending factional fighting drama within ZANU PF, especially since the expulsion of then vice president Joice Teurai Ropa Mujuru in 2014, could we not tell that all these shenanigans had absolutely nothing to do with us?

Could we not discern that these were merely struggles for power within
the ruling party, and none of those involved had any genuine care and
concern for our welfare?

Therefore, when the events of November 2017 started unfolding, could the people not see that this was a dangerous precedence being set – which we should have resisted with all our might, instead of supporting en mass on the streets?

To say that I was disappointed to witness these mass demonstrations on 18 November 2017 – as they were broadcast live on television – would be the understatement of the century.

Having been an ardent critic of the Mugabe regime for years – even having my life threatened on a couple of occasions – witnessing the suffering people of Zimbabwe flocking onto the streets to support ZANU PF factional fighting, and a military takeover – which would obviously usher in a fresh form of oppression – was very painful.

Although, I wrote a few articles warning the poeple of Zimbabwe about taking such a position, I believe from that day onwards, the flame in me to fight injustice in this great nation was greatly dampened.

Even from that moment my articles critical of the ZANU PF regime became fewer and fewer – as the disappointment was just unbearable.

Two wrongs have never made a right – and replacing one tyrannical and pervasive system with another has never been the solution.

As I read those testimonies by those who took part in those 18 November 2017 demonstrations, it is clear that I was vindicated in my distrust of the whole military intervention.

Almost everyone who contributed to the testimonies expressed their grave misgivings and regret over the military intervention and the subsequent so-called ‘new dispensation’ – which was just the victory of now president Mnangagwa and his faction over their rivals within ZANU PF.

Nothing for us in this tragic equation!

Let this be a lesson for all of us – desperation has never yielded positive results.

We all know what is most likely to happened if someone is desperate for money – stealing!

If a lady is desperate to get married, she is most likely to fall into the trap of being used by a married man.

Never should we be guided by desperation, no matter how grave our situation may appear – as this will inevitably lead to errors of judgement and more tears.

The majority of Zimbabweans can bear testimony to this fact – as we all cry out that nothing has changed under Mnangagwa.

I have even heard some saying that it was better under Mugabe – although, that is also a worrying sign of desperation kicking in again.

ZANU PF as a party are the enemies of the people of Zimbabwe, and as long as they are in power, nothing will ever change for us for the better.

This party has dismally failed us over the past 38 years, not because Mugabe was at the helm, but because ZANU PF has never sought to retrospect and re-align its policies.

The events of 1 August 2018 – without pre-empting the findings of the Mothlante commission set to probe the post-election violence and the callous shooting to death of over 6 unarmed people, mostly innocent bystanders –  are a conspicuous sign of things to come in Zimbabwe.

The exercebated economic problems we are all currently reeling under – amidst credible reports of unfettered corruption within the corridors of power – are clear than ever that Zimbabwe has not taken a new trajectory.

The people of Zimbabwe are poised for continued suffering as long as ZANU PF still holds the keys of power.

Oppression and the violent repression of dissenting voices will continue as the order of the day.

All this does not count as long as corruption is allowed to continue – whilst, the only people to face justice are those aligned to the rival G40 faction – or, when the regime focusses on arresting only street money changers, yet those ‘big guns’ behind this graft are left untouched, or when workers continue to be unpaid their salaries by their employers, yet the regime folds its arms, or when those planning to exercise their constitutional right to peaceful demonstrations are arrested before they even take the first step.

It is still business as usual for ZANU PF – Mugabe or no Mugabe!

° Tendai Ruben Mbofana is a social justice activist, writer, and speaker. He is the Programmes Director with the Zimbabwe Network for Social Justice (ZimJustice). Please feel free to call/WhatsApp: +263715667700, or (calls ONLY): +263782283975, or email: zimjustice@gmail.com. Please also ‘Like’ the ‘ZimJustice’ page on Facebook.