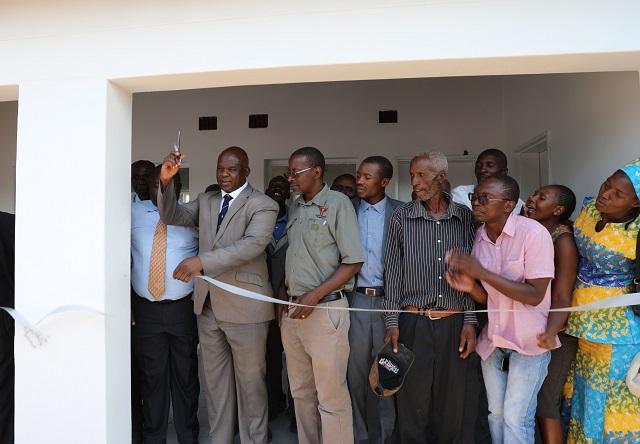 Judith Phiri, Sunday News Reporter
A STANDARD veterinary healthcare centre has been opened in Ward 3 Mbembeswana of Bubi District in a bid to provide extension and advisory services on good animal health care to farmers in the area.

The centre which will assist control and prevent notifiable animal diseases and pests, as well as offer provision of quality and sanitary safety assurances for traded animal products and farmer advisory was built by a non-governmental organisation called Matabeleland Enhanced Livelihoods, Agriculture and Nutrition Adaptation (MELANA) after people in the district complained that the only centre in Mbembesi was too far.

Speaking at the opening ceremony, Member of Parliament for Bubi Cde Sonny Key Mguni said the centre was in line with Government efforts to improve the economy.

“The animal health centre is an asset in line with the current Government policy of Command Agriculture, as we all know Government’s thrust is to support farmers and promote agricultural activities in order to restore our country as the bread basket in the region and also in order to improve our economy in general,” he said.

Cde Mguni said people in the district should utilise the centre as cattle were regarded as wealth in the African society.

“Utilise this place and use it for the right reasons, as you know cows are a man’s wealth and you are also doing this for your children’s future,” he said.

“This asset is one of the three infrastructure projects that have been constructed by the community working together with MELANA as two dip tanks have also been constructed in wards 17 and 18.

We would like to say MELANA you are always welcome in Bubi District and we look forward to working with you in similar projects in future.”

“Most cows were dying of diseases because farmers here had to travel long distances to Bulawayo or Inyathi in order to get doses for their cattle or to seek advice from veterinary officers.

“We were incurring huge travelling, transportation and time costs. The animal health centre will improve livestock management in this region and this will surely benefit all neighbouring wards of this region. We are all happy there is a veterinary doctor in the area,” said Mr Sibanda.

“People in this area should now come and get the correct diagnosis for their animals and be advised on what to do.

“People should desist from those old techniques which they used as these were resulting in cattle deaths,” said Mr Bhebhe.

“Teachers, you should also invite the veterinary doctors from this centre so that they can impart knowledge to students which is in line with the new curriculum. Students also, don’t hesitate to come and ask anything, make use of these people.”