HARARE – Two soldiers are due to appear in court on Tuesday facing charges of murder and armed robbery after US$40,000 was taken during a home invasion in the Hatfield neighbourhood of Harare 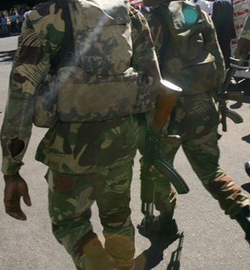 Lameck Kabara from the Zimbabwe National Defence College and Christopher Charuma, who is with the Air Force of Zimbabwe based at Manyame airbase, were arrested on Sunday night over the December 24 robbery and murder of Elvis Chijaka

Police said Chijaka was shot dead after finding a robbery in progress following a call from his sister who was inside the house
Two men wearing balaclavas and firing from an AK47 rifle also wounded Brian Chijaka, who is being treated at a Harare Hospital

The raiders drove off in a white Maercedes Benz Compressor C200 after ransacking the house and stealing US$40,000

The armed robbery and murder was not too far from the Chadcombe house of Joseph Nemaisa, a retired police detective who shot and killed three armed robbers, among them two soldiers, earlier this month

The armed robbers were holding Nemaisa’s family hostage when he shot three dead through a window, while two that escaped were later arrested