This is Mugabe’s US$5 million three-story villa in Hong Kong, where his daughter is at University.

The home is not a retirement home for Mugabe, as most people the world over would like to believe. The house is simply a fall back for his family when he is no longer around. His kids will have a bolt hole then, because it is likely that Zimbabwe may prove too hot for them without the old man’s protection. The villa is housed in the Jackie Chan Centre in Hong Kong. 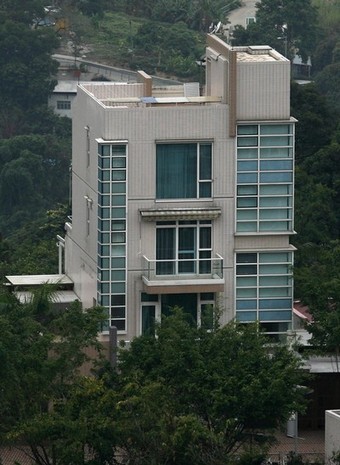 I promised a few days ago to share with you information from impeccable sources on just how Robert Mugabe amassed a fortune during his tenure.So here goes:

Few people know that, when Mugabe travels overseas, the Chief Secretary to the Cabinet goes to the Reserve Bank and asks for cash, hard cash, for the trip. It is given in US dollars. In the 1980s, the figure was US$50 000 per trip.

This money would be put in a black hold-all bag and carried by either Mugabe’s long-service bodyguard or one of the three people that always travelled with him wherever he went.

The money was a contingency fee, to be used when the Prime Minister had impromptu entertaining to do while on his foreign travels. The Chief Secretary back in the 1980s was George Smith, an Ian Smith appointee who stayed with Mugabe until 1983.

Smith brought in the money from the Reserve Bank and handed it over to one of Mugabe’s aides when they were about to leave. The aide would sign for it and then depart with the then Prime Minister for their foreign trip.

Upon their return, whatever money remained would be returned to George Smith together with receipts and a full accounting. Smith would then return the money to the Reserve Bank.

The departure of George Smith from cabinet also marked the beginning of a change in the way this money was handled. Smith, was replaced by Charles Utete, a Mugabe appointee.

It was just before Utete was appointed that Mugabe started carrying that bag of cash himself. His excuse was the theft that had occurred previously, when one of his aides took a wad of the cash from that foreign trip allowance and built a stupendously lavish house along Enterprise Road in Harare, in what is known now as the ultra-rich suburb of Glen Lorne.

The aide was caught out by George Smith and made to sell that house before he had completed it. He returned the money and was then fired from the civil service.

From that point onwards, Mugabe started carrying his bag of cash himself and, as long as David Smith was Chief Secretary to the Cabinet, the money would be returned and accounted for.

When Smith retired and was replaced by Utete, Mugabe continued to carry his bag himself. This time, though, the money stopped coming back.

Mugabe would take his bag with US$50 000/US$500 000 in it and fly off to the UN or the UK or even some African country but, when he came back, nothing would be given back to Utete to take back to the Reserve Bank.

The last time one of my sources checked, Mugabe’s allowance for foreign trips had ballooned from that US$50 000 to US$500 000. That was just before Gideon Gono left CBZ bank to become Mugabe Reserve Bank governor.

Now to fully understand the scale of this scam, you have to remember that Mugabe has always made anything between 15 and 20 trips a year abroad every year since he took over running Zimbabwe.

And that is just from that black hold-all bag.

Another source at the CBZ bank, where Mugabe has a personal account for Zimbabwe dollars explains that Mugabe also got foreign currency for every trip from that bank, especially after the economic problems started in Zimbabwe. By then, Mugabe was a married to Grace.

At CBZ bank, Gono, who was then Chief Executive, would ask his staff to take bank money and go buy foreign currency on the black market with it. Mugabe’s bank account would be debited for the purchase of the foreign currency, but at the official exchange rate, which was many times lower than the ruling black market rate.

This money Mugabe would also take with him overseas.

One of my sources, constantly by Mugabe’s side for more than a decade, going back to times before the man became Prime Minister and stretching into the 1980s, simply says, “When Mugabe came back from these trips overseas, the black bag came always came back empty after George Smith left government. Utete, who was appointed by Mugabe, did not have the guts to walk into the Mugabe’s office to ask for an accounting of the money he had handed over before the trip.”

Making quick calculations, it is possible that, just from the “allowance” for foreign trips, Mugabe may well have amassed more than US$500 million. In some years, he made more than 20 trips abroad.

Even the people who travelled with Mugabe everywhere are not sure exactly where he has put it, but most suspect Swiss banks, which, to this day, still refuse to betray the trust and confidence of their customers by confirming or denying the existence of bank accounts by Africa leaders, Mugabe included.

This contradicts the widely held belief in Zimbabwe that Mugabe’s looting started when he married Grace and that he was a “clean” man before then, when he was still married to the saintly Sally.

I understand that part of Gideon Gono’s job at the Central Bank is to clean up the national books going back to 1983, so that Mugabe and his family are never caught out, should the president retire. It is a massive undertaking, which has not yet been completed.

This is the reason why Gono is not going to be fired. Not by Mugabe and not through the offices of the new MDC minister of finance. He is protected by Mugabe, whose signature is required for Gono to be fired. That signature will not be forthcoming until the president is satisfied that all traces of funds that are unaccounted for is removed from the Central Bank.

The other reason Gono will not go, of course, is that this scheme is still going on and Mugabe cannot trust an MDC governor at the Reserve Bank to continue to play ball and assist in the charade.