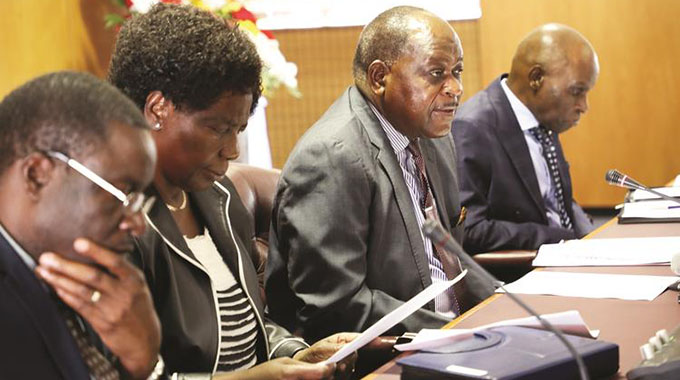 Tendai Mugabe Senior Reporter
Government yesterday outlined its expectations from all permanent secretaries appointed recently in line with goals set out by President Mnangagwa in his Vision 2030. On top of the list are quick-win projects that impact on the lives of the people in every ministry.

The Office of the President and Cabinet yesterday held an induction workshop for all permanent secretaries and top bureaucrats to acquaint them with Vision 2030 and deliverables expected from them.

In his address, Chief Secretary to the President and Cabinet Dr Misheck Sibanda explained in detail the President’s Vision 2030 and the transitional stabilisation programme adopted by Cabinet.

Dr Sibanda, who was flanked by his two deputies — Messrs Justin Mupamhanga and George Charamba — and Public Service Commission deputy chair Ambassador Margaret Muchada, said Vision 2030 elevated economics ahead of politics to ensure that by 2030 Zimbabwe would emerge as an upper middle-income economy with high quality life for its citizens.
“The key goals of Vision 2030 are as follows:

Among other things, Dr Sibanda said, the priorities of the New Zimbabwe in line with Vision 20340 include restoring national unity, pride and patriotism and broad based citizenry participation in national socio-economic development.
He said re-engagement with the international community, creation of a competitive business environment and aggressive fight against corruption were key to the success of the Second Republic.

“Focus is on carrying out governance reforms necessary for laying a solid foundation for sustainable economic take off set out as follows: