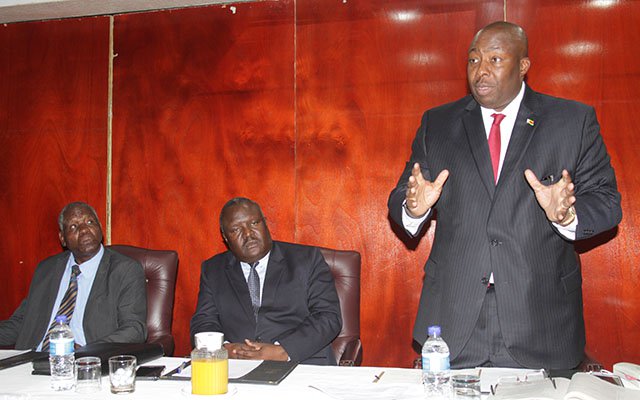 Innocent Ruwende Senior Reporter
Government has procured 226 Isuzu double cab vehicles for traditional leaders following a request by the chiefs. Addressing the National Council of Chiefs in Harare yesterday ahead of the chief’s conference in Bulawayo tomorrow, Local Government, Public Works and National Housing Minister Saviour Kasukuwere said 20 of the vehicles were already in the country and Government will start allocating the vehicles to substantive chiefs.

“We have reactivated that process now and even district administrators who have been deprived we have bought about 73 vehicles so that they can work well. Why should we hesitate to buy vehicles for chiefs, especially those who are substantive? Today you will see a sample vehicle, but we said by the time we go to Bulawayo we should have made some progress. Early this morning, I met with Finance Minister Dr Ignatius Chombo who understood your plight. Some of the vehicles are being imported from South Africa,” he said. Minister Kasukuwere said Government cannot play games with the institution of chiefs. He said he had gone through reports of several meetings which were happening in the country and was not impressed with the welfare of chiefs.

“Chiefs and the President are one. All the concerns you have are with me as your minister. I have arranged that you meet all the ministers at the conference so that they can address all your concerns. We must agree on a way forward. We must agree on a path that promotes good living among our people,” he said.

“Through the chiefs we build a good country and communities. You will have the platform to share the aspirations of your people as well as your own. We cannot have a situation where our chiefs get stranded or fail to access fuel. Why do we humiliate ourselves.” Chiefs council president Fortune Charumbira urged chiefs to unite with the country’s leadership for the betterment of the country.

“Let us support the new minister in his endeavours. It does not help to like the President while doing things that removes Zanu-PF from power. If you like President Mugabe and do not wish for an inclusive Government we should interact honestly,” he said. He said Zanu-PF should remain in power.