Some of the officers were reportedly injured during the attacks, while one lost his life in the line of duty. Bulawayo provincial deputy spokesperson Inspector Abednico Ncube confirmed the figures, but was quick to point out that he had not received reports of any female officers being indecently assaulted. Many citizens were also beaten up and forced to join the stayaway.

“I don’t know anything about female officers being indecently assaulted but 30 police officers were injured in the line of duty. Some were badly injured and are receiving treatment. Some of them have already reported back to work while some are still recovering from home,” he said. 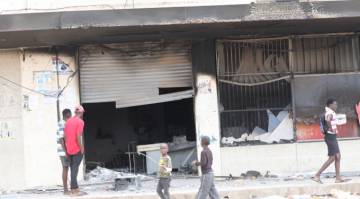 The looted and burnt shell of Choppies supermarket in Pumula East

A police officer was killed on Monday during the violent protests. The police officer was stoned to death in the city. So far, since the demonstrations police, in Bulawayo have managed to recover property and groceries worth thousands of dollars in Entumbane and other suburbs that were looted by violent demonstrators. The recovered goods include stoves, refrigerators, freezers, a plough, shoes, exercise books, alcohol and groceries. 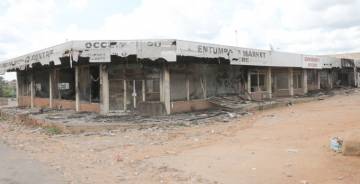 Meanwhile, scores of people who were part of a mob that allegedly looted shops in Bulawayo’s western suburbs have appeared in court for public violence and unlawful entry. They allegedly broke into several shops at Entumbane Shopping Mall and at a butchery in Donnington West before looting various groceries among other goods. 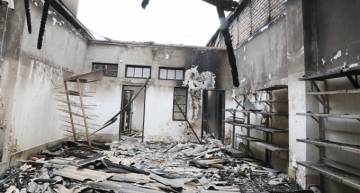 The burnt shell of Chicken Corner shop in Nkulumane

The accused persons were remanded in custody to tomorrow for bail ruling. The accused persons, who are alleged to be part of a mob of about 300 people, allegedly went on the rampage destroying private property, looting and burning shops. Prosecutors said on 16 January at about 11am, the accused persons connived with several others who are still at large and proceeded to several shops at Entumbane Shopping Mall and Donnington West Meats Butchery where they looted the premises. Hundreds are on remand across the country for similar charges.