Residents of Woodlands Suburb in Gweru removing property from a house after being hit by floods this week. — Pictures: Freedom Mupanedemo and Thupeyo Muleya

AT least 30 families whose homes had been flooded following heavy rains in Gweru have been given shelter by the city council working with the District Civil Protection Unit, although residents are blaming the city council for not keeping storm-water drains, which have handled heavy rains before, clear of garbage and rubble.

In Gweru, rains continued yesterday with 55mm recorded, the same as Mutare and Nyanga, while 136mm was recorded for Chisengu, 79mm Buhera, 64mm in Chipinge and 60mm in Nyamaropa.

Several houses in Gweru were hit by flash floods, with property drenched. The houses were almost all in Montrose, Mtapa, Woodlands and parts of Nashville.

Gweru City spokesperson Ms Vimbai Chingwaramusee said the affected families were taken to council halls where they will be temporarily sheltered, while the situation is being monitored.

“On Monday we managed to evacuate 15 families from Montrose and 11 from Mtapa. Today we also evacuated some in Woodlands and we continue to monitor the situation given the fact that the city continues to receive heavy rains,” she said.

Ten centres have been identified as temporary homes for affected families.

“We have Senga Training Centre, Mpumelelo Primary, Takwirira Primary, Mkoba Hall, Shumba Hall and Mtapa Hall. So we have also identified areas which are now in danger and we have advised residents in these areas to start moving to safer places,” she said.

Ms Chingwaramusee appealed to well-wishers to assist with food, clothes and blankets amid reports that some people had all possessions soaked or damaged in the floods.

The council is also appealing for sanitisers and facemasks given the renewed threat posed by Covid-19.

However, some residents said they cannot leave their homes and are angry over what they see as the city council allowing storm water drains to become clogged.

Mrs Lynette Moyo of Woodlands suburb said: “I was affected by floods and all my property was soaked in water but I can’t abandon my property. I have to find other means other than abandoning my property and everything.”

Another affected resident, Mr Albert Nkomo said while natural disasters like floods occur, council must improve the drainage system to ensure water does not flood homes.

“This is human error. They need to fix the drainage system rather than to tell us to leave our properties,” he charged.

In Beitbridge, chairperson of the District CPU, Mrs Sikhangazile Mafu-Moyo, who is also the District Development Coordinator, warned people against crossing rivers or streams in flood, whether on foot or driving. 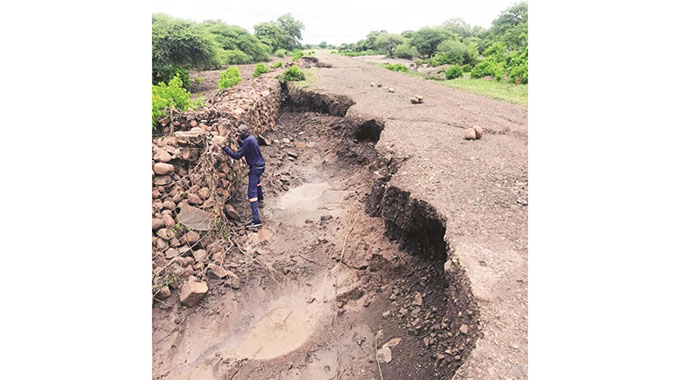 A portion of a damaged road in Masera, Ward 7, along the Beitbridge-Nhwali Road.

She also advised people living in low-lying areas including Shashe, Tshituripasi, Tshipise and Tshikwalakwala, to be on high alert for floods.

“The rains have damaged a lot of roads; in some areas culverts and bridges have been washed away. This adversely affected the grain distribution programme in most rural wards. We have engaged all the local road authorities to intervene, and some say they can only get on the ground after the rainy season,” said Mrs Mafu-Moyo.

She said it was important for people to minimise unnecessary movements in line with national lockdown guidelines to minimise new Covid-19 infections and cases of drowning and being swept away by strong flowing rivers.

Most gravel roads under Beitbridge Municipality, especially in the western suburbs including Dulivhadzimu and Tshitaudze, have become inaccessible to motorists. Workers from the local authority’s Engineering and Works Department were yesterday repairing damaged roads in Dulivhadzimu suburb around the stadium and the long-distance bus terminus.

Flooding in this area has become a perennial headache for residents and council.

Villagers from Shashe (Beitbridge west) are now using the Limpopo Swereki road to access the town.

It is 93km from Shashe to Beitbridge and more than 140km for those that now use an alternative route.

Those in Beitbridge East (Dite, Nuli, Tshapongwe, Tshabili, Tshituripasi and Tshikwalakwala) have to use makeshift roads to get to the urban part of the district.

About 200 000 people live in the district’s rural component where thousands are food insecure and are benefiting from the Government’s drought relief programme.