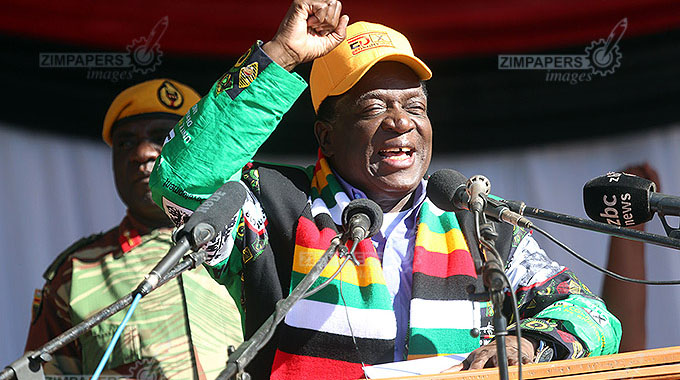 Levi Mukarati recently in Bindura
Zimbabwe and Zambia have agreed on principles for the $4,5 billion Batoka Gorge Hydro Electricity project secured by Harare, paving way for a technical meeting this week between experts from two the countries, President Mnangagwa has said.

Zimbabwe recently received an expression of interest from General Electric Africa to undertake the 1 600 megawatt power project along the Zambezi River, co-owned with Zambia.

The project is expected to create 6 000 jobs.

The project will ease power shortages in Zimbabwe and Zambia, with a huge potential to supply other regional countries.

Addressing a bumper crowd at Chipadze Stadium on Saturday, President Mnangagwa said the project had his blessings and those of Zambian President Edgar Lungu.

“We have the Batoka Gorge project along the Zambezi River; the feasibility studies have been completed,” said President Mnangagwa.

“There are three companies that are applying to do the project and we are assessing their capability.

“It is a $4,5 billion project and we are doing it in partnership with the Zambian Government. I wrote to my Zambian counterpart President (Edgar) Lungu and he responded favourably to what we had agreed.

“So next week, I would be sending my experts on the project and President Lungu will also be sending his team of experts so that they collectively work on the intricate details of the project.

“But at our levels as Presidents, that is myself and (President) Lungu, we have agreed that the project must go ahead.”

The development comes as Zimbabwe has set in motion a number of electricity generation projects that are envisaged to see the country produce surplus power in the next five years.

President Mnangagwa, a fortnight ago, launched the $1,5 billion Hwange Power Station Unit 7 and 8 construction project which is set to add 600 megawatts to the national grid.

The project comes after the successful completion of the Kariba South expansion venture that has an output of 300 megawatts.

Zimbabwe has also secured an investor for a coal-bed methane gas project in Matabeleland North Province.

The country is currently producing about 1 200 megawatts of electricity against a demand of 1 400MW during peak period.

The Batoka Gorge project engineering and legal assessments were carried out in 2016, but there were delays in the implementation.

General Electric Africa director (originations) Reginald Max told a Parliamentary Portfolio Committee on Mines and Energy then that the company had the financial capability to undertake the project.

“We have a clear track record and we have the financial muscle to undertake the project,” he said.

“We believe that power assets such as Batoka should be owned by the State.

“We will invest to develop the power station, but ownership will be retained by Zimbabweans (and Zambians),” said Mr Max.

Under the Batoka project, Zimbabwe and Zambia will share the electricity equally when generation commences.

Project specifications by the Zambezi River Authority show the scheme will be undertaken on a build, operate and transfer basis upstream of the Kariba Dam hydroelectric scheme.

“The proposed scheme includes a 181m high roller compacted concrete gravity arch dam, radial gated crest type spillway, two underground power stations on each side of the river with four 200 megawatt Francis turbines installed in each, giving a total capacity of 1600 megawatts for the scheme,” states the ZRA on its website.

“The scheme is designed as a run of the river scheme with an estimated average energy generation of 8 700GWh/year.”

Zimbabwe has over the past seven months under a new administration witnessed renewed investor confidence with a number of deals being secured and projects taking off the ground.