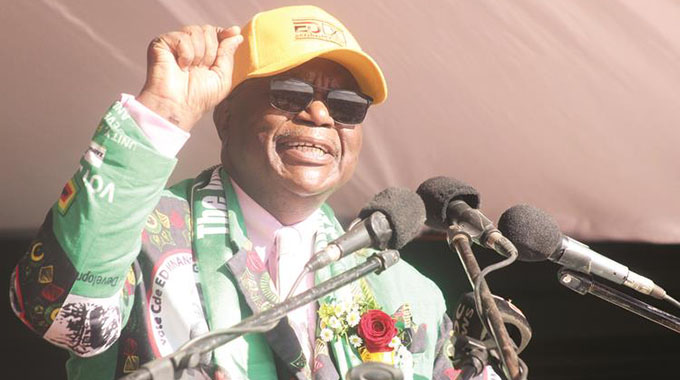 “Councils should not disconnect water for defaulting residents because of the health implications. I will speak with Local Government, Public Works and National Housing Minister July Moyo so that he directs councils to stop that,” he said.

VP Chiwenga was responding to residents who complained that City of Harare was disconnecting water supplies to their homes.

He also urged youths to defend the gains of the liberation struggle.

“The youths are the future and it is your duty to safeguard the gains so far achieved. It is President Mnangagwa who is the best man for the job judging by the commitments shown by the international community in his short term in office,” he said.

“Thousands of people perished in the liberation struggle. Zimbabwe is in the hands of the youth. Our sun is setting, but we want to leave the country is safe hands. We want to rebuild the country to its former glory. This is what President Mnangagwa is doing. We already have $20 billion worth of investments lined up.”

“We must shun corruption. Whoever is practising it must be extracted from us and be thrown away so we concentrate on rebuilding our country. We have many resources with the important one being human resource. We have the best in the African continent. The second resource are our minerals. We also have good soils and weather. Youths should use their skills and we want to create jobs for our youth.”

VP Chiwenga said youths must play the leading role in rebuilding of the country saying the “Zimbabwe is open for Business” policy did not mean that only foreigners should come and invest, but locals should also play their part.

He said the country suffered a lot in its 18 years of isolation and urged youths to be innovative and start small and medium enterprises.

“Two weeks ago President Mnangagwa opened the Zimbabwe Women’s Microfinance Bank. We are going to fund it. Our women were failing to access loans because of collateral. This bank will assist all enterprising women with loans. Empower Bank will assist youths with funds to start up their own businesses,” he said.

“Government will keep funding the two banks. We want them to grow. What we want from you now is discipline. Let us unite and work for the good of our country. There must not be any retrogression. It does not bring food on our table. You must however, not forget.”

He said on average every Zimbabwean should have at least $3 500 in his pocket.

He said President Mnangagwa was a hard worker and wants to work for the country.

“What we want is unity among our people. If we are united we can engage our friends and among ourselves so we can do business with the aim of rebuilding our country. We should also re-engage those we had rubbed shoulders with,” he said.

“Our young people were now frustrated with the shrinking of the economy in our 18 years of isolation. We had become trillionaires. It is imperative for Zimbabweans to unite and work together to build the country.”

VP Chiwenga said he appreciates the role played by the Asian community during the liberation struggle and in the development of the country.

He said Zimbabweans across race and colour poured into the streets last November, during Operation Restore Legacy that saw Mr Robert Mugabe resigning.

VP Chiwenga said the impending elections will be free, fair, credible and non-violent.

“Elections have to be done every five years to ask people if they still want us. But President Mnangagwa has already showed the path which the country is taking. He said Zimbabwe is open for business and encouraged ease of doing business,” he said.

“We need to build companies so that our youth leaving universities and colleges will get jobs. We want to build our economy. The terror on June 23 will not deter us nor will it stop the election. We will go ahead with our agenda of rebuilding Zimbabwe.”