Source: 750 Save elephants poisoned – The Zimbabwean

Harare – Zimbabwe lost approximately 750 elephants to cyanide poisoning along the SAVE River in the south eastern part of the country. Poisoning elephants results in a significant secondary loss of carnivores, vultures, and other species of birds and animals. 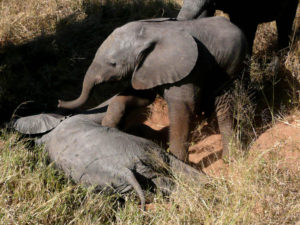 The authorities have NOT managed to control or stop the use of poison, especially cyanide.  The poisoning of elephants occurred far too often for at least three to four years.  The damage being done to animals and their habitats will not be recoverable.

The Government Ministers, Military Officers, Prison Service Officers and other VIPs are lining their pockets with monies derived from poached ivory and game skins.  These individuals are thought to engage in these activities due to the possibility that ZANU- PF might lose the elections in August. The Government does not appear to enforce the laws or the Wildlife Act as the practice of profiting from poached ivory and animals is so widespread.  It seems to be a “free for all.”

One solution would be for all Ministers and individuals in high positions to declare their assets and the manner in which they obtained their wealth. For those who decline to declare their assets, an investigation into their financial dealings should commence. Corruption appears to run deep. Assets from individuals who cannot explain their fortunes should be frozen until an investigation is completed and they are cleared from wrongdoing.

The Ministers and/or their families who have camps near Safari areas or Wildlife Parks seem to be benefiting from the influx of trophy hunters from South Africa.  Monies gleaned from these hunters from hunting quotas and license permits seems questionable. This practice appears to be happening all over the country with no apparent controls in place.

Zimbabwe continues to export her treasured wildlife. They recently exported crocodiles, elephants and other wildlife to zoos in Dubai and China.