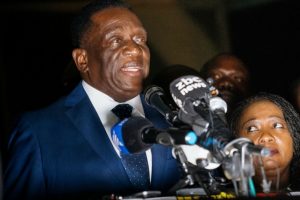 Mnangagwa has alleged that a group linked to former first lady Grace Mugabe is likely behind the attack that left one of his deputies and a top Zanu-PF official among the injured.

Zimbabwean President Emmerson Mnangagwa’s “irresponsible” bomb explosion comments have been slammed by experts, while a group of non-aligned war veterans called for an independent probe.

At least 49 people were injured, while two others were pronounced dead two days after the incident.

Mnangagwa alleged that a group linked to former first lady Grace Mugabe was likely behind the attack that left one of his deputies and a top Zanu-PF official – who have been flown to a South African medical facility – among the injured.

According to BBC, Mnangagwa said he suspected that a group called the Generation 40 (G40), which supported the former first lady’s bid for the presidency, was responsible for the explosion.

He, however, said that investigations were still underway and that he expected arrests to be made soon.

The president’s remarks came a day after a picture of Mugabe flashing a V-sign went viral on social media.

Comments could lead to ‘cover-up’

Last Tuesday the paper published the picture accompanied by the words: “This picture of former first lady Mrs Grace Mugabe flashing the V-sign was circulating on social media yesterday three days after the attempted assassination of President Mnangagwa in Bulawayo. Mrs Mugabe was with her ailing husband in Singapore. Condemnation of the terrorist attack has been widespread.”

According to the privately owned NewsDay‘s weekend edition, experts have cautioned against the president’s comments, saying they were likely to jeopardise the investigation.

Constitutional experts were quoted as saying the president’s comments were “irresponsible” and would likely lead to a cover-up “if evidence leads against a person they think the president doesn’t want”.

A fringe group of non-aligned war veterans who are known as Non-Partisan Freedom Fighters have said that failure to properly investigate the attack would likely sink the country into a “civil strife”, the report said.

The group said international forensic experts should be brought in to investigate, added the report.