A Coup Offered Hope to Zimbabwe. Has Its New President Delivered?

Source: A Coup Offered Hope to Zimbabwe. Has Its New President Delivered? – The New York Times 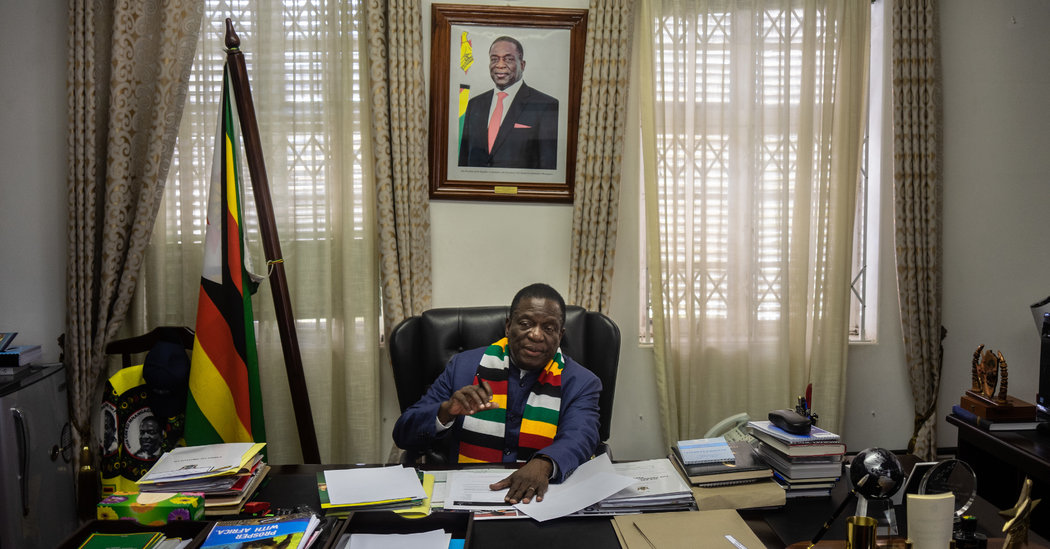 President Emmerson Mnangagwa of Zimbabwe in his office in Harare.CreditCreditZinyange Auntony for The New York Times

HARARE, Zimbabwe — Everywhere he looked, President Emmerson D. Mnangagwa could see his own face. To battle his cold, he sipped a hot drink from a mug adorned with his own head shot. To his left, an aide wore a green shirt covered with the same image. To his right was a large photograph of the president as a young man. His state portrait hung from the opposite wall.

Since seizing power in a 2017 coup from his onetime mentor, Robert G. Mugabe, Mr. Mnangagwa has gradually imposed himself on Zimbabwe — here in Mr. Mugabe’s former offices in downtown Harare, as well as on the country at large.

Though the new president is marketed as a clean break from Mr. Mugabe and 37 years of autocratic rule and economic mismanagement, Mr. Mnangagwa’s opponents now fear he is more dangerous than his predecessor.

The number of government critics charged with “subverting a constitutional government,” a form of treason, during Mr. Mnangagwa’s 21 months at the helm already outstrips the figure during Mr. Mugabe’s 37 years in office, according to a coalition of 22 Zimbabwean rights watchdogs.

In between coughs and sneezes, Mr. Mnangagwa dismissed criticism of his human rights record and highlighted his reforms.

“In every society, oppositions will make accusations,” he said in a rare interview. “You need to deal with facts.” 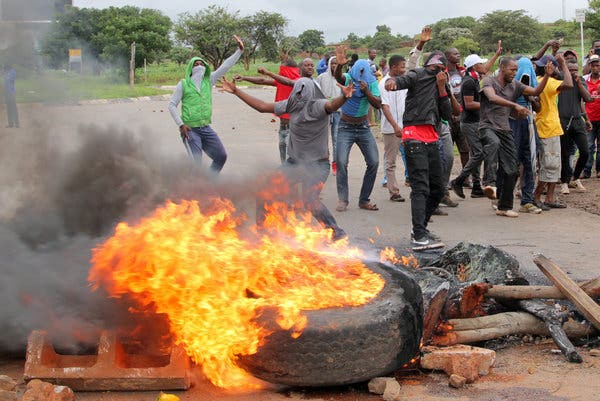 A protest in January on a road leading to Harare. The military was deployed in January to dispel protests against a fuel price hike.CreditPhilimon Bulawayo/Reuters

Mr. Mnangagwa has already removed some constraints on foreign investors and white farmers who lost land under Mr. Mugabe. He has pledged to replace Mugabe-era legislation that obstructs press freedom and the right to protest and to set up an international inquiry into abuses by his own security forces.

“We are now in a serious movement of economic reforms and political reforms,” Mr. Mnangagwa said.

But the difficulty for Mr. Mnangagwa is that many Zimbabweans see little new about the 77-year-old’s presidency. Before he turned on Mr. Mugabe, Mr. Mnangagwa was the former leader’s longtime enforcer and later his deputy.

A guerrilla fighter during the liberation struggle against white rule, Mr. Mnangagwa accompanied his predecessor to the negotiations that led to the creation of Zimbabwe in 1980. He later served as minister for state security, overseeing the domestic intelligence service before becoming justice minister, defense minister and finally vice president. He helped carry out much of the legislation that he now promises to rescind.

And while Mr. Mnangagwa tends to turn to the military to keep the population in check, in a departure from Mr. Mugabe’s reliance on the police and informal militias, his critics say the result is the same: a repressive government that has a dangerously low tolerance for dissent.

“The current regime is worse than Robert Mugabe on all fronts,” said Obert Masaraure, the head of a teachers’ union who said he had twice been abducted and tortured by military officers since the start of the year, before being handed over both times to the police. 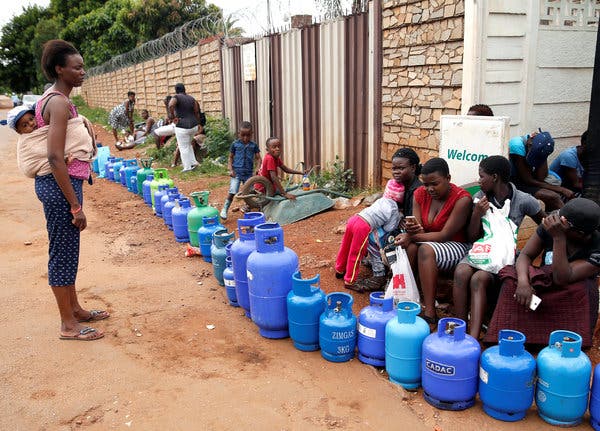 Mr. Mnangagwa and his party won presidential and parliamentary elections last July. But an international election monitoring team, jointly led by the National Democratic Institute and the International Republican Institute, two American democracy watchdogs, found that the polls were not free and fair.

According to the team’s report, Mr. Mnangagwa’s party may have allocated food aid and agricultural supplies in exchange for political support in the run-up to the elections.

Mr. Mnangagwa defended the election, which he noted was peaceful, and insisted there was no bribery during his campaign.

“We don’t give to a person because he is a particular cadre of a particular party,” he said. “A person is given support because that family or household is in need of food.”

Traditional leaders, who are bound by the Constitution to remain politically independent, corralled their villagers into voting for Mr. Mnangagwa, the election monitoring team’s report said. It also said there were irregularities in the tabulation of the final vote.

“The elections failed to make the mark,” said Johnnie Carson, a former United States assistant secretary of state for African affairs, who led the delegation of election monitors. “All of these things weigh in and create an environment that can shape the outcome of an election long before an election day.” 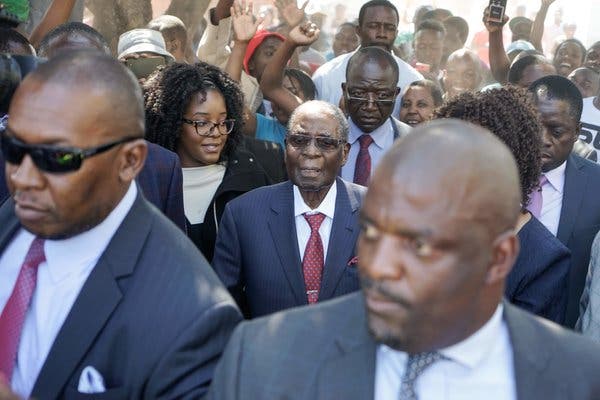 The election was also immediately followed by the killing of six protesters during a military crackdown on demonstrations against suspected polling irregularities.

In January, the military was again deployed to dispel protestsagainst a fuel price hike. During the days that followed, 17 people were killed, 16 raped, 26 abducted and more than 900 arrested, according to the coalition of Zimbabwean rights watchdogs.

Mr. Mnangagwa sat in his office recently for an interview next to a shelf stocked with books by Xi Jinping, the Chinese president. China is a major stakeholder in the Zimbabwean economy. And the 2017 coup led by Zimbabwe’s army chief at the time, Constantino Chiwenga, and Mr. Mnangagwa came days after Mr. Chiwenga returned from a visit to China where he met his Chinese counterpart and the Chinese defense minister.

The president also presents himself as a corruption fighter. His tourism minister had been arrested that week on graft charges, the first senior casualty of a new anticorruption commission that Mr. Mnangagwa founded in July.

He said the military was deployed in August and in January only because the police were overwhelmed by the scale of the disturbances, presenting his approach as the only sane response.

“My brother, I don’t know what you would have done,” he said. “We have to protect and bring law and order in the country.”

Mr. Mnangagwa has been traveling extensively throughout Africa, promoting and developing plans for economic reform. He wants to be seen as a modernizer, and he portrays Zimbabwe as once again “open for business.”

He opened a dry port for Zimbabwean trade in Namibia. He has reduced the paperwork needed to open companies, and he loudly seeks foreign investment in the mining, tourism, agricultural and textile industries.

He is also calling on the United States to end a raft of American sanctions that President Trump recently extended for another year.

Though most of the measures are targeted only at particular individuals, such as Mr. Mnangagwa, and at certain government-owned firms, they are a potential obstacle to loans from the World Bank and the International Monetary Fund.

Zimbabwe exported goods worth more than $75 million to the United States in 2018, making the United States one of its largest trading partners. The American government says it is the largest donor of aid to the country.

Zimbabwe is suffering from vast shortages of fuel, bank notes, water and electricity. Drivers typically wait three hours for gasoline, and civil servants line up all morning to receive part of their salaries in cash. Half of the capital Harare receives running water only once a week, and electricity blackouts last up to 18 hours a day in many areas.

An inflation rate of more than 175 percent has put some food and medicine beyond the reach of middle-class Zimbabweans. Shoppers emerging from a Harare supermarket complained of a sevenfold rise in the price of bread since this time last year.

“We can’t afford to buy groceries,” said Jonathan Tiripano, a 46-year-old window-frame manufacturer who said he had gone without breakfast. His family had stopped buying meat, bread and milk and was surviving mostly on vegetables and ground maize, he added. “We can’t cope.”

People are suffering, Mr. Mnangagwa acknowledged, but he said he expected that with time, the situation would ease.

“The economy is going to be fixed through a process,” he said. “These things cannot be done overnight.”

Mr. Mnangagwa acknowledged that sanctions were only one cause of Zimbabwe’s escalating economic crisis. It has been exacerbated by decades of corruption, mismanagement and a recent austerity program enforced by Mr. Mnangagwa’s finance minister, Mthuli Ncube, a former economist at the University of Cambridge.

The austerity program has created Zimbabwe’s first budget surplus in years, which would allow the government to pay off some of its debts, which might in turn unlock more international loans. An electricity deal was being signed with a South African energy supplier, and he was negotiating with China to finance the renovation of the Zimbabwean water system.

But outside his office, in the serpentine lines that define today’s Harare, few believed him.

“Mugabe was better than this guy,” said Patrick Muza, a 33-year-old minibus driver who had been standing in line for two hours for fuel, and still had at least an hour to go. The most recent price hike had raised the cost of gas by another 15 percent, making his business increasingly unprofitable.

“During the coup, we were happy,” Mr. Muza said. “But we didn’t realize what was to come.”