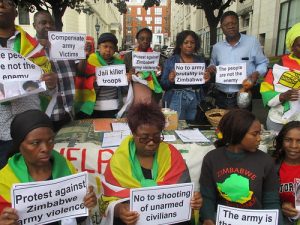 The Vigil demonstrated on Saturday against the failure of the government to implement the recommendations of the Motlanthe Commission of Inquiry into the army’s murder of unarmed civilians during a demonstration in Harare last August.

Outside the Zimbabwe Embassy in London activists carried placards reading: ‘No to shooting of unarmed civilians’, ‘No to army brutality in Zimbabwe’, ‘Jail killer troops’, ‘Compensate army victims’, ‘The people are not the enemy’, ‘The army is the enemy of the people’ and ‘Protest against Zimbabwe army violence’.

The violent suppression of the anti-government protests last August and again in January have not stopped the situation in the country continuing to deteriorate with millions facing starvation. Some of this is, of course, attributable to drought and climate change but the government must bear full responsibility for its disastrous handling of the economy, which has created a widespread feeling of hopelessness among a people driven to desperation. In one tragic case, a  woman is said to have killed her two young children and committed suicide.

Mnangagwa has refused to talk to opposition leader Nelson Chamisa who has called for a demonstration on Friday. In the unlikely event that permission for the demonstration is granted the government would be wise to keep troops in the barracks. It is the job of the police to deal with demonstrations and any over-reaction would be disastrous.

The West is fast losing patience with the Zimbabwe government although it is pouring in millions of dollars to help alleviate the humanitarian crisis. Perhaps China will also contribute something although further government to government loans from Beijing are unlikely. A Chinese bank has even put Zimbabwe on its sanctions list for non-repayment of debts (see: https://www.newzimbabwe.com/top-chinese-bank-places-zimbabwe-on-sanctions-list/).