A false new dawn: What was foreseen, unforeseen

The afternoon after Zimbabwe’s historic Monday July 30 elections, I was trying to assuage the fears of Jason Burke, the correspondent for the London newspaper, the Guardian, that chaos and violence would ensue any time.

Source: A false new dawn: What was foreseen, unforeseen – The Zimbabwe Independent 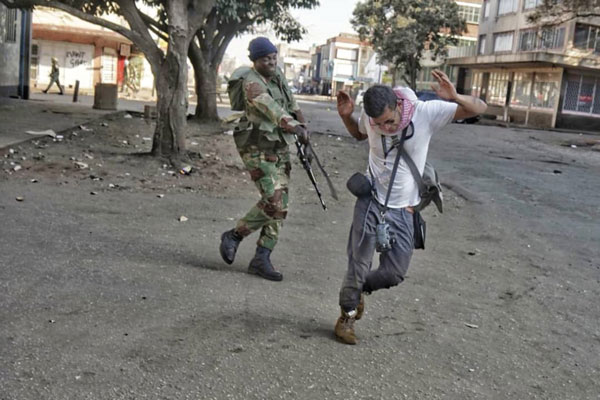 A soldier assaults a foreign journalist as the army dispersed protesters in Harare on Wednesday.

The military-dominated Zimbabwe Electoral Commission was dragging out the counting. Meanwhile, civil society election monitoring networks were filling the information void. Their preliminary reports said that 21% of the presidential results meant to be posted on the polling stations’ walls were not available: this was against the law and warranted the election nullified. The parliamentary and municipal ward results, however, were pasted for all to see.

Movement for Democratic Change (MDC) Alliance (MDC Alliance) leaders were calling foul — and coming too close to comfort to declaring a win that they would defend. This too fell foul of the country’s electoral laws.

Folks were rumbling. But I repeated the cliché to Burke that Zimbabweans were too peaceful to mount a full-fledged revolt, and that anyway their equally suffering brothers in the lower ranks of the military would not shoot them if they did resort to a war of the poor and disenfranchised.

The electoral commission had by that relatively quiet Tuesday afternoon announced only seven results for the MPs — resounding successes in very rural constituencies for the governing Zanu PF. However, within 24 hours (Tuesday August 1), the electoral commission was able to release all the parliamentary results, proclaiming a massive victory in the national parliament: 155 seats for Zanu PF and only 53 for the long-time aspirants,the MDC Alliance. All were still on tenterhooks for the presidential results.

Zanu PF thus had more than the two thirds majority in parliament needed to change the constitution — again — so the renewed Zanu PF president might be able to continue in power for ever. That is what Mugabe thought would be his destiny, until the coup only eight months ago changed his mind.

The long participatory process from 2010 until 2013 that produced the lovely liberalism of the contemporary constitution could be for naught. That whole legal framework — albeit barely implemented by the last regime — could be replaced by one more amenable to a dictatorship.

On Wednesday August 1 the electoral commission postponed announcing the presidential results. Later it said it was ready to announce them, but had to wait until all the presidential candidates were present.

By evening the MDC Alliance’s Nelson Chamisa and some of the 21 motley crew of candidates finally arrived to bow to the final straw, opening the way to the electoral commission being able to release the results which it did the next day.

But by Wednesday evening the carnage on the streets had been waged.

Thus my attempt to calm the British journalist was partly right — the people did not launch a war. They did, however, lunge at the gates surrounding the electoral commission centre at the Rainbow Towers, demonstrated at the commission’s headquarters in town, hit out at the Zanu PF headquarters, threw rocks at cars and scared away some informal vendors.

But I was wrong in my belief — based on mid-July chats with newspaper vendors, car park security guards, petrol attendants, liberation guerrilla soldiers who had borne the brunt of Mugabe’s wrath in the 1970s, and those higher up the divided Zimbabwe hierarchy in MDC circles — that soldiers would refuse orders to shoot their compatriots. The junior officers submitted indeed. Zimbabwe’s history of ruling group violence against the slightest signs of a shift against it rose once again to stifle democratic challenge.

The police — decimated because they were on the wrong side of the security split during the coup and, so we were told, out around the country securitising the election — decided to bow out, calling in their military superiors.

By the end of the day only blood remained. At least three people had been killed (friends in Harare told me five) and many, many more beaten and injured. By Thursday the soldiers were called to their barracks.

The MDC Alliance leaders were no more angelic than their competitors, even though Chamisa may think he has divine guidance. One wonders: what leverage would have been gained by sending their followers to death? As the violence waned I hoped that they would not unleash the fabled “hot squads” purportedly trained in Rwanda and Uganda (Mugabe preferred the interahamwe).

The presidential results were due to be announced by Thursday afternoon. Advance copies were sent to me, and the NGO monitors have them too. It’s expected to be a Mnangagwa win.

What should the MDC Alliance do when the loss is digested?

If, as is widely discussed, both Mnangagwa and Guveya Chiwenga, his co-director in the coup against Robert Mugabe, are sick men, would it not be better to consolidate the poorly organised MDC Alliance to prepare for the next elections in 2023? Zanu PF could quite well implode (again) by then.

For now, there are two destroyed parties to leave space for the ever-strengthened military-business conglomerate.

Lastly, how will the regional neighbours and global powers react? They seem to have been foiled by the crafty Zimbabwean comrades once again. — Conversation.

Moore is professor of Development Studies and visiting researcher, Institute of Pan-African Thought and Conversation, University of Johannesburg.